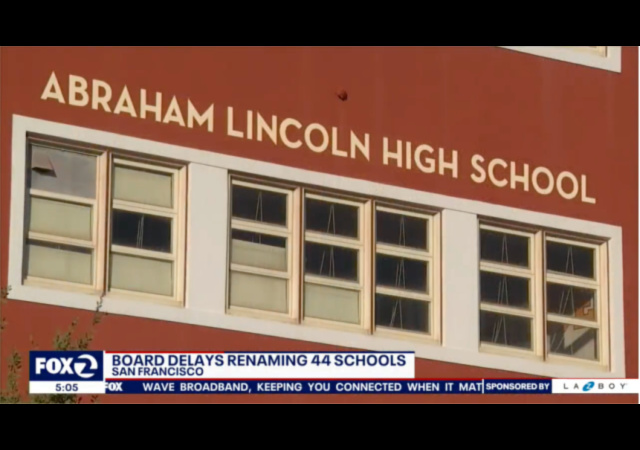 The San Francisco Board of Education decided to delay renaming 44 schools, admitting they made mistakes “in the building renaming process.”

The school board voted to rename the 44 schools, including one named after President Abraham Lincoln, in January. Parents and city officials exploded because they want the schools to reopen more than anything right now.

On Sunday, board president Gabriela Lopez announced she was now more focused on getting students back into the classroom.

“I’m committed to making sure every student and family at SFUSD is supported through this process,” she tweeted. “I also acknowledge and take responsibility for mistakes made in the building renaming process. We need to slow down and provide more opportunities for community input — that cannot happen until AFTER our schools are back in person.”

“I know families are hurting,” she wrote. “I hear it from each and every parent I’ve spoken to. We’re in negotiations to get the work on returning to in-person learning done and I’m committed to working with city partners to get vaccinations, testing and other resources we need.”

I want to make sure as many people as possible can see my statement about the board’s focus on reopening our schools. pic.twitter.com/8aJvMdNNPT

Mayor London Breed called the renaming “offensive” during the pandemic:

Breed said in a statement Wednesday: “This is an important conversation to have, and one that we should involve our communities, our families, and our students. What I cannot understand is why the School Board is advancing a plan to have all these schools renamed by April, when there isn’t a plan to have our kids back in the classroom by then.”

Another chart shows 70% of the students are proficient in math compared to 12% of blacks and 21% of Latinos.

Then the city of San Francisco sued the school board for not having a plan to reopen.

Herrera said they are suing for “violation of administerial duties,” claiming the school district failed to perform its duties in preparing for a return to school. The lawsuit is the first of its kind in California.

“The Board of Education and the school district have had more than 10 months to roll out a concrete plan to get these kids back in school. So far they have earned an F,” Herrera said. “Having a plan to make a plan isn’t going to cut it.”

“This is hurting the mental health of our kids and our families. Our teachers have done an incredible job of trying to support our kids through distance learning, but this isn’t working for anyone,” Breed said.

Shut down the district completely. Lay off anyone employed by it. End any school taxes funding it.

The kids are better off without these institutions anyway.

Detroit will take them in. Everyone there is doing horribly, regardless of skin color.

Yes, we know you’re in a hurry to rename the schools after your heroes of the Socialist Revolution, but let’s open them first, okay?

It must be so frustrating to the poor school board members, having to divert from what they care about to respond to the demands of those silly parents.

It’s almost as if the parents think school is about the kids! What is this world coming to?

Well, someone has…..dreams of grandeur, huh?

I wonder if her dreams consists of Royal Purple or Ermine?

That struck me too. La di dah. Pass the can o’ peas.

How many disruptive children in class does it take bring a halt to learning?

From what I have seen, most of the problems in schools are do to poor parenting, followed by useless school administrators, and then teachers.

When a child comes from a home where parents just sort of tolerate them, where there is little discipline, nurturing, no active teaching, no teacher can fix that. There are large numbers of children in that situation.

The premise that people of color achievement deficit was based mostly on environment was fatally flawed. Rather than admit this, the whole system committed fraud, and started passing off people who were incapable, as being competent.

“How many disruptive children in class does it take bring a halt to learning?”

Results just in: the new record minimum is zero. Zero.

This is what happens when places like SF elect right-wing people to any elective office — particularly key positions like a school board. These board members have forgotten their priorities — no child can learn in a badly named school. I suspect these school board members finally asked them selves “WWTD” (what would Trump do). Pelosi should impeach them so we can get truly enlightened people leading our children.

The hang up for re-naming schools is not which names to get rid of. Any good Marxist can figure that out. The problem is to make sure that the new name is not someone who can be later described as a thought-criminal by the Secret Police later.