“This story was updated Sept. 2 to note that Biden checked his watch multiple times at the dignified transfer event, including during the ceremony itself. The rating on this claim has been changed from partly false to missing context” 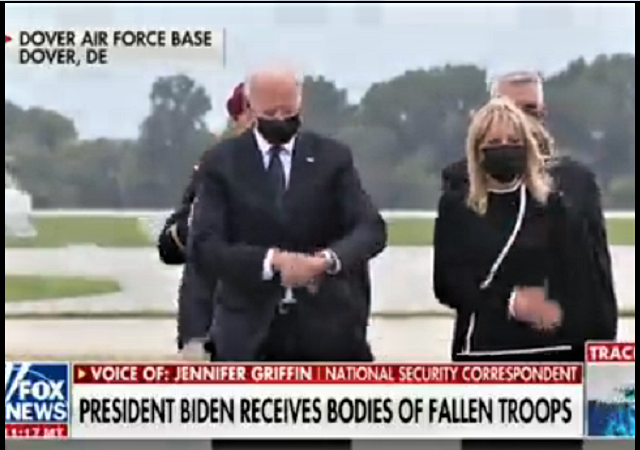 Last Sunday during the dignified transfer at Dover Air Force Base for the 13 U.S. service members who were murdered in last week’s Kabul suicide bombings, President Joe Biden shocked viewers and enraged family members of some of the victims when he appeared to check his watch at certain points.

For those who missed it, here’s a video clip of one of the instances Biden looked down at his watch:

It's true. Joe Biden checked his watch during the dignified transfer of the servicemembers killing in Afghanistan at the airport. You can see him jerk his left hand to pull the watch out from under his sleeve, then look down at it. pic.twitter.com/M3QVzJbTIm

The respective fathers of two U.S. Marines killed in the attacks told Fox News’ Sean Hannity on Monday that Biden actually checked it multiple times during the transfer, which they found deeply offensive.

“I leaned into my son’s mother’s ear and I said ‘I swear to God if he checks his watch one more time’ – and that was probably only four times in. I couldn’t look at him anymore after that,” Mark Schmitz, the father of fallen Missouri Marine Jared Schmitz, said during the interview.

Darin Hoover, who lost his son and Utah Marine Darin Taylor Hoover Jr. in the attacks, stated that Biden looked at his watch 13 times.

Marine Lance Cpl. Kareem Nikoui’s mother Shana Chappell wrote on her Facebook page Monday that “as my son and the rest of our fallen Heros were being taken off the plane yesterday [I] watched you disrespect us all 5 different times by checking your watch!!!” Mysteriously, both her Facebook and Instagram accounts were “incorrectly deleted” for a short time before being restored.

Because so-called fact-checkers apparently exist these days to cover for Democrats regardless of the actual facts and to bash Republicans for things they didn’t do or say, USA Today fact check reporter Daniel Funke rushed to defend Biden by “fact-checking” the claims of the grief-stricken Gold Star family members and others who alleged Biden was looking at his watch, finding them “partly false.”

In the original report – which was published Wednesday afternoon according to the timestamp, the headline read “Fact check: Biden honored service members killed in Kabul, checked watch only after ceremony,” while the piece included assertions like “the claim that he checked his watch instead of honoring the fallen service members is wrong” and “he appeared to check his watch after the ceremony ended” and “he did so after the dignified transfer ceremony was over.” The “partly false” rating was explained as follows:

“Based on our research, we rate PARTLY FALSE the claim that Trump saluted the caskets of fallen U.S. service members, while Biden checked his watch. The pictures are real, but they don’t accurately summarize the two events. The way Biden honored the 11 caskets presented at Dover Air Force Base, with a hand over his heart, was similar to how Trump paid respects to fallen service members during his presidency. Biden checked his watch, but he did so after the ceremony had ended.”

Twenty-four hours later, the “fact-check” fell apart, with USA Today having to issue a rather major correction to it.

For starters, the headline was changed to read “Fact check: Biden honored service members killed in Kabul, checked watch during ceremony.” But at the very top of the page, the following notation was made after the paper had reviewed other photos and video clips from the event:

Corrections & Clarifications: This story was updated Sept. 2 to note that Biden checked his watch multiple times at the dignified transfer event, including during the ceremony itself. The rating on this claim has been changed from partly false to missing context.

LOL. Only in Media World can a supposed fact-checker get it completely wrong and yet resort to claiming the problem was that there was “missing context” to the fact check instead of just admitting they screwed up.

To make matters worse, Funke took to the Twitter machine after the correction was issued, and after expressing “regret” in another tweet, he tried to make himself out to be the real victim in all this:

It’s easy to dunk on journalists when we get things wrong. I get it – to many, we’re just another name on a screen. But behind that screen is a person trying to do their best.

The problem here, of course, is that the fact checks they “get wrong” almost always involve instances where they unfairly maligned a Republican (like former President Trump, most notably) or unfairly gave free passes to Democrats who didn’t deserve them (as they’ve done with Biden, then-Senator and presidential candidate Kamala Harris, failed 2018 Georgia Democratic gubernatorial nominee Stacey Abrams, and others).

This is a point Florida Gov. Ron DeSantis’ press secretary Christina Pushaw, who frequently battles press claims about DeSantis, made as well:

Everyone makes mistakes. It’s just completely obvious that all the “mistakes” made by corporate media activists go in one direction and push the narrative of one party. https://t.co/aVIOwD7mgv

Plus, this was more than just a “mistake”:

This went beyond ''mistake'', however.
It reframed visual evidence, ignored reports from those who were on sight, and even the correction refused to verify it as 'True', opting instead for 'Missing Context'. https://t.co/mPV3rrojTj

This had to be one of the most embarrassing fact checks in the history of fact checks. Seriously. Funke should have just taken the “L” and quietly moved on.

In Bugout Biden’s defense, someone scheduled the ceremony at the same time Matlock was on.

Howdy Doody is more his speed. More likely he wanted some ice cream.

Again, I say he was checking to see if he had a pulse.

he wasn’t checking his watch: he wanted to make sure he had washed all the blood off his hands… it was his Lacy Macbeth moment.

Exactly what context is missing? It seems fairly well spelled out to me: Biden checked his watch multiple times during a ceremony to honor fallen soldiers. Families of the fallen soldiers felt that the behavior was disrespectful. What’s missing in that?

That Funke is a POS.
If USA Today had any ethics (which they don’t), they would make him meet the families of the deceased soldiers and tell them to their faces that he was sorry for calling them liars.

No one but us notices these “corrections”. Liberals will only remember the original lie.

They know better. They are just liars, too.

Can you begin to imagine the levels of outrage if the roles were reversed with Trump?

I’m not talking about the fake bullshit stuff like refusing to drive to a D Day remembrance session because the roads were to windy because Democrats outrage was as fake as the fake story was.

But if this was Trump doing this kind of shit it would have been an extinction level event like ending net neutrality and 3 SCOTUS appointments was for liberals.

Democrats can go fuck themselves.

The legacy media simply cannot admit they are incorrect. They seem to be incapable of doing so. They pretend to possess a superhuman ability; infallibility, If they would just admit to being fallible human beings and approach their job with humility they could recover some respect.

Instead they approach their job with unbridled hubris, then demand unearned compassion when they are confronted with clear evidence of mistakes. So long as they arrogantly pretend to infallibility they are unworthy of compassion.

I admit to being a fan of this particular insurrectionist fantasy, in which the idea is floated that the proper targets for those battling our nation-stealers are the soft ones, who sit in front of computer screens or stand in front of cameras and lie 24/7.

Gold families who were there stated that Biden checked his watch a total of 13 times, once after each casket passed by.

Then perhaps he was timing them, making sure they were spaced out correctly.

“Missing context” = factcheckerspeak for “It’s true but we really don’t want to admit it.”

No one is criticizing mere error. People are criticizing knowing fake news and the manipulation of readers. Big difference.

Why does POTUS wear a watch? He can’t do a damn thing about the time. H Handlers push POTUS through their schedule. The President cant make adjustments by what he thinks his watch is showing. AND, its a distraction, because lots of POTUS function is ceremonial

There’s a whole lexicon that goes with media. When Democrats screw up, the story is normally about how Republicans react i.e. “Republicans pounce!” This is an admission (however small) that the media has become the DNC spokepersons.

Somewhere in the world it was about to turn midnight and Biden was about to turn back into a house plant. The Dover ceremony was to be about HIM and obviously it wasn’t going his way. He wanted it over and done with. Impatience is also a sign of dementia.