“FACT CHECK: At two inches each, a thousand burgers would not reach one mile high.” 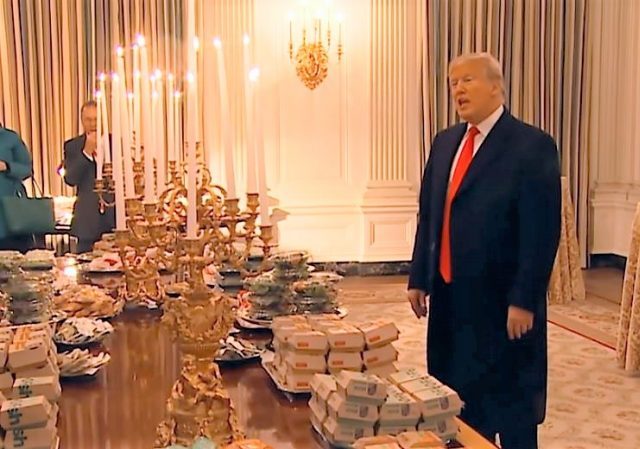 Trump served fast food hamburgers to the team. The media lost its mind.

Trump claimed the burgers were “piled up a mile high”: 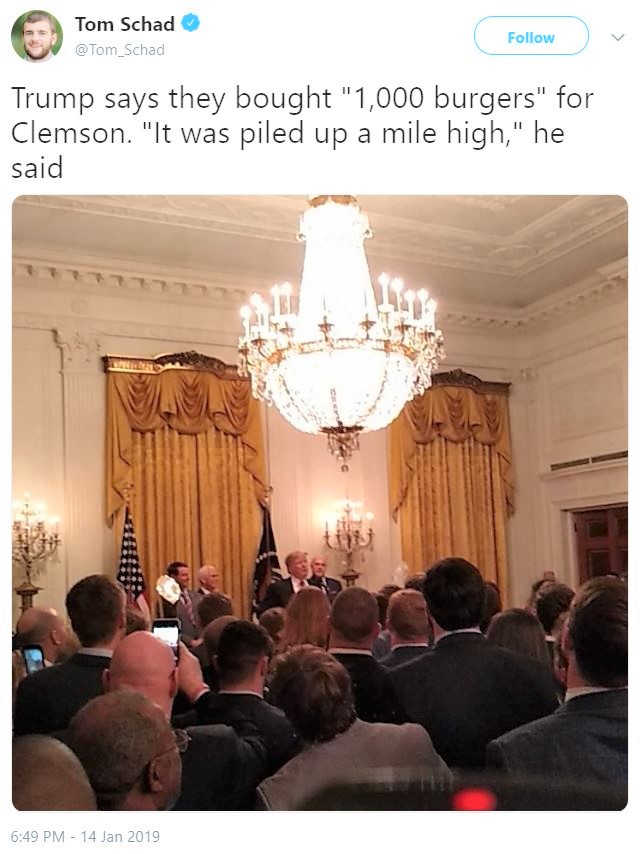 A mile high? Such a claim would be understood by almost everyone to be a common idiom that does not literally mean a mile high.

But in the age of fact-check mania, The Washington Post fact-checked Trump’s boast in a full-blown analysis, not even a quick drive by hit job, President Trump’s extravagant, $3,000, 300-sandwich celebration of Clemson University: 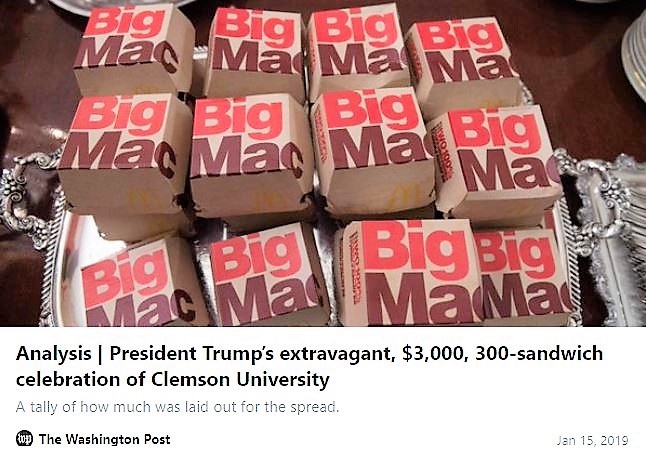 There is one other asterisk worth noting. In other comments, Trump — in true Trump fashion — suddenly more than tripled the hamburger count….

FACT CHECK: At two inches each, a thousand burgers would not reach one mile high.

Had Trump instead invested his entire net worth — $3.1 billion per Forbes last year — on $5 sandwiches, each two inches high? A stack of hamburgers nearly 20 miles high.

“I’d say I’m surprised, but fact checking 1,000 burgers “piled up a mile high” has to be the perfect indication that the media has lost its damn mind.”

“If you feel the need to fact check whether there were really one thousand burgers and if they were really “piled a mile high,” that says a lot more about you than anything else. Man, thank God for the Guardians of Truth. We’d be lost without them.”

“I’m screaming: “Trump said at the banquet that he bought 1,000 burgers for Clemson and that “It was piled up a mile high.” The Post felt the need to fact check this ….”

First thing I thought of.

if you watched the movie, the mile part was overladed, not what he said

Trump is intentionally baiting media, they just keep making fools out of themselves.

You could pile WH reporters a mile high and still not reach the truth.

That Fact Checker is slower than a tortoise on Prosac.

That Fact Checker is slower than a tortoise on Prosac.

Had to log in real quick just to thumbs up that one!

Keep it up and you’ll become a legend in your own time!

How many Jim Acostas would it take?

But what a rotten sandwich.

Idioms, analogies, metaphors, similes, cliches, adages are all lies when Trump uses them.

As are, obviously, exaggerations, hyperbole, boasts, and brags.

And don’t ever let him quote a biblical parable to convey an idea. Or reference a myth, poem or lyric.

Well, not so ‘nuts’ – their antics do work: some millenials actually buy into these crazy statements and repeat them, feeling they’re somehow informed. It’s amazing the investment they will make in them.

Gotta fight back hard – all the time.

PIZZERIA ON THE CORNER SAYS THEY HAVE THE BEST PIZZA IN TOWN! OMG WAPO FACT CHECK THEM PLEASE K THX!!!

That can’t be, because a pizzeria here says they have the best pizza in town. Wait, maybe this is part of some massive cross-country collusion with the Russians! WaPo, please investigate this flaming hotbed of corruption.

The WP staff has so much time on their hands that they can actually write joke stories!

With so little actual news to report, I guess they’ll be having a big layoff soon, or maybe just close up shop. What a shame. News was a pretty good business back in the days when things happened.

Washington Post no longer has the ability to separate real stories from the chaff.

Did the Wa Post hear the one about their owner sending pictures of his penis to married women before he began dating them?

WaPo Motto “Democracy Dies in Darkness”
or when we smother it with superfulous ink.

“We cover the news … (like with a pillow, pressed down real tightly).”

If I told you once, I’ve told you a thousand times.
Don’t exaggerate

What more can be said about this? Just another glaring example of why so many are so fed up with and don’t hardly trust what the MSM has to say about anything anymore!

The WaPo wants us to believe that each sandwich was $10 ? Oh please

Trump knows the college kids would get more out of a buffet of fast food than some fancy meal and it’s cheaper too.

If you associate with leftists, demonrats, commiecrats, progressives – BEWARE ! – you might catch INSANITY !

Ever since Trump won the Left has been suffering from a collective psychosis. It is similar to rabies, incurable.

Get right on that claim, WaPo.

The headlines should have been “Trump Busted Telling a Whopper!”

I knew there had to be areason why Trump avoided Burger King.

The rabid Trump-hating fanatics and Leftist, water-carrying propagandists in the media evinced more outrage and indignation over POTUS serving fast food (horrors!) to guests, than it did over the breathtaking revelation that the sainted Obama and his lackeys quashed an active DEA operation/investigation to stifle Islamic terrorist group Hezb’allah’s billion-dollar U.S. cocaine-peddling operation.

You heard right — the infantile media was more upset over the most trivial and insignificant matter conceivable, than they were over the revelation that the sainted Obama and his lackeys made a conscious decision to indirectly facilitate dope-peddling in the U.S. inner cities, by a vile Islamic terror group.

This represents the quintessence of the moral bankruptcy of the contemporary Left and its media allies.

I still think the best way to punish Iran is to knock out their approximately 40 water reservoirs and hydroelectric dams. That would really fix those useless scheming SOBs. Payback for the embassy thing on a grand scale.

Would their military be able to function in the face of massive loss of power and water?

That would essentially eliminate any central government in Iran. Hit a few major bridges while you’re at it.

The uproar won’t be complete until CNN’s House Eunuch–Brian Stelter–pronounces the opinion that Trump lied.

You should see Mark Dice’s imitation of Stelter – it’s hilarious:

The fact-check doesn’t shock me. The headline employing the word “extravagant”.. that, shocks me.

At least the article noted that Trump is personally paying for it. Those who do not read past headlines will probably think the taxpayer did, though.

A mile high? Such a claim would be understood by almost everyone to be a common idiom that does not literally mean a mile high.

The Talmud (Tamid 29a) points out that the Torah, literally authored by God Himself, says things that are not literally true, such as “Cities that are great and fortified up to the sky” (Deuteronomy 1:28). The prophets did the same: “And the people piped with pipes, and rejoiced with great joy, and the earth split at their sound” (1 Kings 1:40).

Also see Maimonides, Laws of Oaths, 3:5: “If one saw many soldiers, or a tall wall, and swore: ‘I saw the army of King so-and-so, and he has a million soldiers’, or ‘I saw the wall of such-and-such a city, and it was as tall as the sky’, or words similar to these, he has not sworn falsely, for he did not mean that they were exactly so, no more and no less, but merely meant to convey the height of the wall or the size of the army.”

Clemson’s star QB said he had a great time and is looking forward to coming back:

Look out Alabama; Dabo Swinney is the new sheriff in town.

If he really wanted to troll the media, he should have had a pile of Chik-Fil-A sammiches and waffle fries there too

Or is that chain even allowed in DC?

Obama would have gathered them around an empty table and made a speech about how the evil Republicans were preventing them from enjoying the occasion.

The Clemson haters (mostly USC Gamecock fans) are absolutely giddy over this, claiming Trump likes SEC football and it was a big-time snub of Clemson. I think that after 9 months of a carefully crafted diet these guys were absolutely overjoyed to have McDonalds and pizza.

As evidenced by my screen name, I’m not a Clemson fan, but thinking this was a snub is about the dumbest thing I’ve heard in a huge pile of dumb from CFB fans.

I do have some very loose ties to the football staff though and wish them well.

I sure hope Willie T can turn FSU around. FSU was a thorn in my pride for many years ever since the infamous “puntrooskie” but seeing them this year and the condition of the field at Doak Campbell made me want to cry!

As for the salad thing, give me a huge f—ing break. If he were actually going to give them salads, of course Melania and Mrs Pence would not be making them, unless they felt like it. If he were actually giving them salads he’d either have the White House chef make them and put them on his bill, or he’d send out for them just as he did for the burgers. But he was joking, the joke rested on common stereotypes, and having the wife preparing food is a common stereotype, whether humorless feminists like it or not; using it made the joke funnier.

(People do realize, don’t they, that the Trumps don’t get free meals at taxpayer expense? Every meal they get from the White House kitchen goes on their monthly bill. They only eat for free if they’re at an official state function.)

There were Burger King burgers and Wendy’s burgers–maybe they made up the missing 700 burgers? Inquiring minds want to know.

And what about the Pizza Hut pizzas? Were they good for half an inch each?

If this is the best that Bezos bozos on the WaPo can do, he needs to hire some better people.

I didn’t know the WaPo was doing satire now.

Wapoop is making The Onion look so much more respectable than wapoop could ever imagine.

Each player and staff member for the Clemson Tigers got one sandwich each. Trump got two.

Trump tweets: Fact check this – all journalists are a-holes.

Next day in WaPo: We have looked into Trump’s claims about journalists, and determined only most, and not all as claimed by President Trump, are a-holes.

It’s to bad they are not that vocal when Islam actually does something to women or kills gays but Haters gonna hate!

Wow. Food stacked a mile high. Even with the damn government “shut down.”

Is this a great country, or what?

Congratulations. You did it! Best coffee in the world. Elf.

The burgers are $10 each by the time all the taxes are paid on them.

The Fact Checker should be Fired! This is laughable! ????

They’re compiling some statistic about “Trump lies” and will surely add this to the total.

What!? No Mile High Club Sandwiches?