“Trump used facilities that were built during the Obama-Biden administration to house children at the border.” 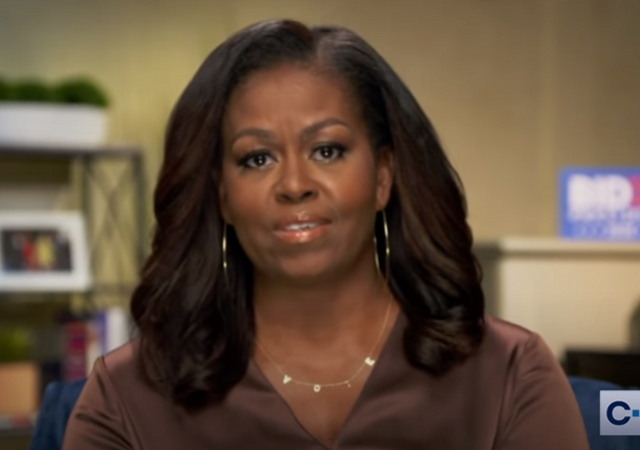 During the opening night of the Democratic National Convention, the headline speaker was Michelle Obama. In her speech, she made a reference to immigration and used the tired Democrat talking point about ‘kids in cages.’

Shockingly, she was called out by the Associated Press with a fact check.

Here it is, via the Seattle Times:

AP FACT CHECK: Michelle Obama and the kids in ‘cages’

Michelle Obama assailed President Donald Trump on Monday for ripping migrant children from their parents and throwing them into cages, picking up on a frequent and distorted point made widely by Democrats.

She’s right that Trump’s now-suspended policy at the U.S.-Mexico border separated thousands of children from their families in ways that had not been done before. But what she did not say is that the very same “cages” were built and used in her husband’s administration, for the same purpose of holding migrant kids temporarily.

A look at her remark in the keynote address at the opening night of the remote Democratic National Convention:

MICHELLE OBAMA, on Americans: “They watch in horror as children are torn from their families and thrown into cages.”

THE FACTS: The reference to cages is misleading and a matter that Democrats have persistently distorted.

Trump used facilities that were built during the Obama-Biden administration to house children at the border. They are chain-link enclosures inside border facilities where migrants were temporarily housed, separated by sex and age.

Here’s a clip of Michelle Obama’s comments. Note that she also uses the term ‘peaceful protesters’ to describe what’s unfolding in American cities. Too bad they didn’t fact-check that.

"They watch in horror as children are torn from their families and thrown in cages." pic.twitter.com/sU3cAO3kyv

All criminals are “torn from their children” when they are incarcerated, you dolt. FOLLOW THE LAW.

Vile and entitled Michelle Obama is a liar; we knew this, already.

Recall her ridiculously staged, photo-op visit to a Target store, at which an elderly white woman shopper who didn’t recognize her, asked her assistance in reaching an item situated on a high shelf. Obama recounted the episode on late-night TV, playing it for laughs, then had the gall and the dishonesty to later re-cast the same episode in a nefarious light, alleging that the woman was a racist who had recognized her and then treated her as the hired help, in asking her for assistance.

That’s how vile this woman of privilege, is, concocting false stories of racism, like Oprah did with that hapless clerk in a handbag store in Europe, in order to cast herself as some sort of “victim.” It’s sickening and absolutely despicable behavior.

When was the last time Michelle down at the border physically and financially helping those poor kids and families? Oh, all talk and blame is sufficient for the elite.

AP should have told its readers WHY the Obama administration (and later the Trump administration) had to separate those children “from their families.”

It was because so many of the kids were being brought across the border by people coming here illegally who were NOT their families. Instead these “family members” were kidnappers, sex traffickers, and other criminals who had bought, borrowed, kidnapped, etc., the kids.

Obama administration policies made having a kid at the border a free ticket for illegal aliens to remain in the U.S. Once word got out south of the border, illegal alien adults started doing whatever they could to obtain kids (any kids) in order to use them as their “get out of being deported” card once they crossed illegally into the U.S.

It was the Obama administration’s policies that created the incentive for illegal aliens to use and abuse these kids, and that’s why Border Patrol had to separate the kids from the adults they came in with, until they could determine who the kids were and if they were in danger. Many of the kids “ripped from their families’ arms” were actually separated from the arms of their kidnappers, their rapists, their pimps, their owners, etc.

Yes, I know,– too, too small of me. But she’s FAT! All that work on that face and just to get a puffy round face. And the humungous Goddess butt is surely even more Goddessy now. Schadenfreude is great, and this time well deserved. She’s a preachy, sanctimonious prig, and I’ sick of the sound and sight of her. And she’s FAT!

Could it be that AP is trying to recover respect and abandon bias by suppressing news or publishing misleading stories? It should be the main part of their service to share the truth as widely as possible. I would love to be able to trust professional news media.

The very word professional is a common con job.

“She’s right that Trump’s now-suspended policy at the U.S.-Mexico border separated thousands of children from their families in ways that had not been done before.”

Notice how AP prefaces their “fact check” with another lie before semi-kinda-sorta admitting that Michelle Obama did not tell the truth.

Off-topic note: the NY Post is building the case that Adam Haner, the man who was beaten into unconsciousness and almost killed by Antifa/BLM brownshirts, deserved what happened to him.

I predict that the Antifa/BLM brownshirts who tried to kill him will not do any time for their crimes.

Leftists lie with the ease you breath

She’s been out of the picture for so long, it was easy to forget what a pos dirtbag parasite this woman(?) is.

Just as we saw in 2016: Four years of nonstop oppo research, and—incredibly—they’ve found nothing. Obviously, DJT isn’t a career politician, so the usual foibles of the political class won’t be there; but he was never a low-profile figure. And they’ve still come up with nothing.

So they have to make up imaginary crimes which never happened. They’ve done just about the best job possible to clear Trump of any hint of suspicion for real corruption, graft, double-dealing, child molestation, or those other routine expectations which earn politicians such low regard. The business of peddling made-up fantasies is an admission that there are no underlying facts to justify anything more solid.

And this is why I believe Trump is much stronger now than four years ago. Voters with honest questions about his integrity need no longer speculate; the nastiest shit-shovellers in the country have basically admitted that he’s clean.

Someone at AP is going to get fired for that.

notamemberofanyorganizedpolicital in reply to getsome. | August 19, 2020 at 8:41 pm

Is she still trying to hide her basket?

Some time ago, I read the reason for separating children from their parents at the border. The US does not know who are really parents and relatives. The kids are separated until the parents’ identification is confirmed.

Leftist lie with the ease you breath