The Democrats cannot (but they will try) blame the failure to pass the infrastructure bills on the Republicans. 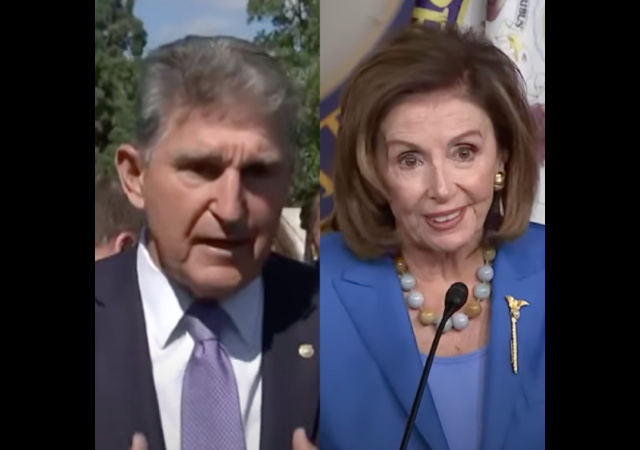 ***I will update this post whenever the House votes. That is if it’s before my bedtime. I’m old so I try to be in bed by 10 PM CT.

So will they or won’t they?

It’s the last day of the fiscal year. The Senate already voted to fund the government, delaying a shutdown. The House passed it as well. Biden will likely sign it.

Let’s look at the House. The left-wing faction of the Democrats wants them combined. The others either only want the $1.5 bill or a vote on them separately.

Pelosi and the House

Pelosi is feeling the heat. She claims they are going to whip the votes, but those far-left Democrats are not caving:

Pelosi is publicly and privately indicating that she is muscling ahead with the vote despite mounting progressive threats to tank the bill without a clear path forward for the party’s separate — but politically linked — social safety net bill, according to several people familiar with the discussions.

“We’re on a path to win the votes. I don’t want to even consider any options but that,” Pelosi told a packed room of reporters Thursday morning. “Think positively.”

But later Thursday, progressive leaders emerged from a lengthy meeting in Pelosi’s office declaring that their members would hold the line against infrastructure without a vote on that broader party-line bill.

“We are in the same place,” Congressional Progressive Caucus Chair Pramila Jayapal (D-Wash.) said, flanked by other top liberals. Still, she wouldn’t say if Pelosi was willing to delay the vote: “There’s always a chance. … All kinds of things could happen very quickly.

I haven’t found out what time Pelosi plans on having the House vote on the bill(s).

The vote might not happen today if they cannot whip the votes.

From colleague Jason Donner. Clyburn says he hsa not whipped the infrastructure vote.

Manchin and the Senate Democrats

I haven’t seen a lot of people tweet or talk about Sinema today. Maybe they finally realized she is not budging on her “no” vote.

The attention is on Manchin today.

It looks like Manchin will stick to his guns and oppose the $3.5 trillion bloated pet project bill.

A lot of people have complained that Manchin is just now bringing up his demand for only $1.5 trillion.

It turns out he told Schumer in July he won’t go above $1.5 trillion.

The West Virginia senator has been distributing the document to Democratic colleagues and leaders in recent days to underscore that he has outlined his red lines on President Joe Biden’s jobs and families plan. The one-page understanding is dated July 28, right before the Senate passed a bipartisan infrastructure bill that Manchin helped write and ahead of Senate passage of a budget setting up a spending bill as large as $3.5 trillion.

In the document, Manchin proposes raising the corporate tax rate to 25 percent, the top tax rate on income to 39.6 percent, raising the capital gains tax rate to 28 percent and says that any revenue from the bill “exceeding” $1.5 trillion will go to deficit reduction.

So shimmer is acting like there was no deal with Manchin. He knows that’s not going to go over well – wouldn’t be surprised if him and Nancy find ONE Repub to change his vote.

Not surprised at all.

Well, here’s what is actually happening: there are several Senators in “purple” districts like Manchin’s who are also not on board with the $3.5T price tag of the pro-union, Green New Deal, massive expansion of entitlements. They are just letting Manchin (and to a somewhat lesser degree, Sinema) take the heat. This is a heat he is happy to take; his poll numbers are exploding almost as fast as leftist heads are exploding that the Bernie-written wishlist of the anti- and un-American regressive left is on the ropes.

Manchin’s biggest and best and least covered statement so far: “I am not a liberal and never have been.” Dude. Them’s fighting words in today’s Democrat party! Manchin, a Senator, is not about to be wrangled or hog-tied by Pelosi, the Queen Bee of the circular firing squad House.

Manchin loves taxing and spending, he’s a Democrat fgs, but he is also a brick wall on certain things, always has been. The more they push him, the more Pelosi (over in the House!) tries to pressure him, the more he digs in. He’s not beholden to Pelosi’s glass of water with a “D” on it; indeed, he is not even close to caving to Pelosi (of all people! She has zero leverage over Manchin . . . and is slowly getting that she can’t actually control the Senate. From the House. Even as Speaker.

Don’t get me wrong, all this crazy, useless Biden taxing and spending will happen. It will just be less than the “destroy America” Democrat caucus fantasizes about. In the meantime, enjoy Manchin completely and totally ignoring a fired up and frightened Pelosi. He’s playing her hard–why would he, in a million years bend to her will?–and it’s rather glorious. It won’t end well for America, of course, but enjoy the moment.

Don’t forget Sinema was in the House before she was elected to the Senate. She knows how Pelosi operates.

And both she and Manchin know that Schumer can’t kick either one of them out of the Dem caucus because if he did and they chose to sit as true independents with no committee positions or caucus with the GOP in order to get committee seats, hello, Majority Leader McConnell.

IMO, the crap sandwich will have to be rewritten to satisfy both of them, or you can kiss both it and the smaller infrastructure bill goodbye.

Another c/o of womanizing

I think they are trying to get rid of his supporters

Pelosi is only going to be Speaker for one more year. Then the Dems in the House will get smoked come November. What leverage could she possibly have over Sinema or Manchin?

Nevertheless, I believe that there was a deal between McConnell and Schumer and probably Pelosi right from the beginning so I wouldn’t be surprised were McConnell to again pull a rabbit out of the hat to hand the Dems another victory just as the Republicans are about to win. Isn’t that what usually happens?

Cheating? You apparently got that covered..
Me, not so sure

Not so easy as in a Presidential election. There are far too many congressional districts. Democrats were able to focus-fire their cheating on a few areas to flip the election. Having to do so nationwide is another matter.

The Democrats lost several House seats in the census redistricting which will likely flip to Republican.

The big thing is that more states are announcing that they will audit the 2020 elections, probably because of what is being revealed in AZ and how hard both parties fought the audits in other states. There is a spreading unease among voters in general that elections are rigged.

There is a lot of “red pilling” going on these days. We need to get out of our echo chambers and open our eyes to see it though. The tide is turning. Next year well be much worse for the Dems and RINOs than anyone expected. I am hearing it these days across the board as more and more people are getting unnerved by all of the government by fiat. The Uniparty will be forced to explain this mess they created and “It’s Trump’s fault” is going to back fire bigly if that is their only answer.

If they would work in a foreign country to foist a created contagion that is blown so far out of proportion upon us, there is nothing….nothing they will not do to avoid a midterm slaughter.

Serious log rolling in DC tonight. If they had the votes to pass it they would have done so. That they don’t may be a teaching moment from Pelosi to the progressive caucus that wanting and wishing don’t count. It’s entirely possible that nothing passes. IMO it depends how petulant v pragmatic the progressive caucus turns out to be.

Yes. Pelosi is a vote-counter extraordinaire, so she knew a passage vote on the smaller bill was going to fail. The vote didn’t happen to spare herself the public humiliation and also to make sure it is still around to bring up for a vote without any parliamentary moves needed if they ever get an agreement on a smaller version of the crap sandwich.

I also think it is significant that Manchin said that he was never really all that liberal. Not that I trust any of these polymorphs but that sounds like a polymorph morphing to survive a changing environment. That is what these polymorphs do.

Things get really interesting if the Proggie Dems hold the line and Pelosi has to tuck her tail and ask some moderate GOP traitors back to the negotiating table to pass either bill.

Hopefully, those traitors can be outed and multiple Dem factions can be embarrassed all at the same time!

Times are pretty desperate for the Dems when Bernie steps out of the shadows in attempt to wrest control of the party away from Nancy:

The Dems appear to be self-purging communism out of the party heading into the 2022 elections. How big is that House Progressive Caucus? 120? 140? It would be very interesting to see how they are polling. Bernie might be finding himself herding cats soon.

…any revenue from the bill “exceeding” $1.5 trillion will go to deficit reduction.

Back during the Obama years, a number of Dems got elected to nominally red districts. These were the ‘Blue Dog’ Democrats.

When the big push for the ACA came in, those Dems were hesitant as hell to support it, because they knew darn well their constituents didn’t like it one bit. Pelosi the Hag cajoled and threatened them into compliance, with the understanding they’d be supported come the next elections.

Well, unsurprisingly, the DNC simply didn’t have the funds to support those Blue Dogs, and they got trounced.

Manchin is not stupid. He has seen how this plays out. So he’s not really willing to play ball with Schumer and Pelosi.