The past few months have been among the most exciting and impactful the Legal Insurrection Foundation has had. We were and are in the right place at the right time: “I want to talk about how you can save the nation.” 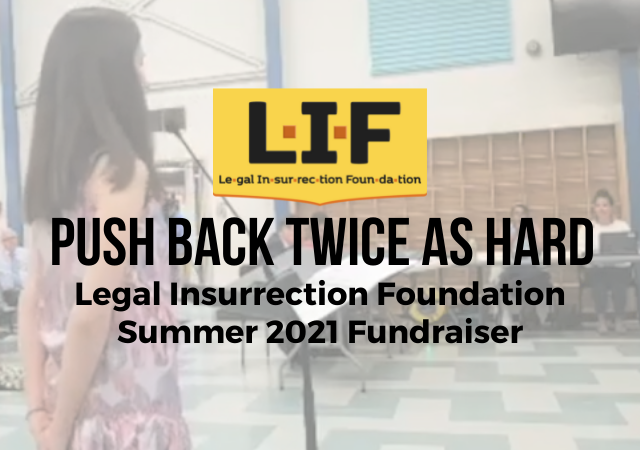 The past few months have been among the most exciting and impactful the Legal Insurrection Foundation (LIF) has had since launch in March 2019. We were and are in the right place at the right time. Donations are tax-deductible to the full extent allowed by law. You can DONATE HERE.

The story of why and how LIF was formed was laid out in Introducing the Legal Insurrection Foundation, and the catalog of events and achievements were detailed on our First and Second Anniversaries.

February 2021 saw the launch of CriticalRace.org, an LIF website covering Critical Race Training in education. We recently surpassed 350 colleges and universities covered, and we have added additional researchers to further build out the map.

The CRT website has become the most authoritative source of CRT information, cited and linked in dozens of publications and media outlets, running from mainstream, to conservative, to liberal. That’s our niche, digging deep and creating a well-sourced and documented core resource that others can use. We also have staying power. Remember ElizabethWarrenWiki.org our seven-year pre-LIF project with the deepest rebuttal of her Native American claim anywhere? We will still be on the case after media coverage moves on.

Our authority continues to grow. Just last week I gave a presentation on “Fighting Smart Against Critical Race Theory In Education” to over 100 state legislators at the American Legislative Exchange Council annual meeting.  I’m hoping to have the video of the speech posted at some point. Here’s a brief transcript excerpt:

I’m speaking to a group, although I only have 15 minutes, in many ways, you are the most important group I’ve ever spoken to. Because you can actually make a difference. You are really at the center of what this fight is about, and you can help change the trajectory of the country. Now, I know you probably thought you were coming to a meeting to talk about educational policy, not how you’re going to save the nation. But I want to talk about how you can save the nation.

Based on the reaction to my lecture, it is very likely I will be invited to speak at various state legislative committees on the topic. 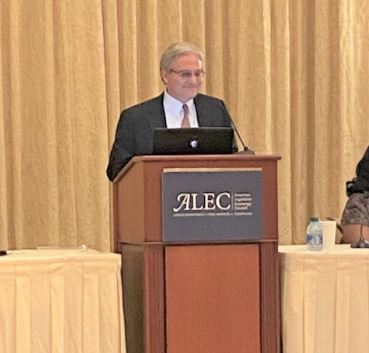 We also maintained a booth at the conference where we were able to meet numerous state legislators, tell them about what we do, and make connections. Here’s Kemberlee providing information to a state representative. Others may get more media hits, but we are making a difference on the ground, viewed as a legitimate, honest, and rational voice on the subject. 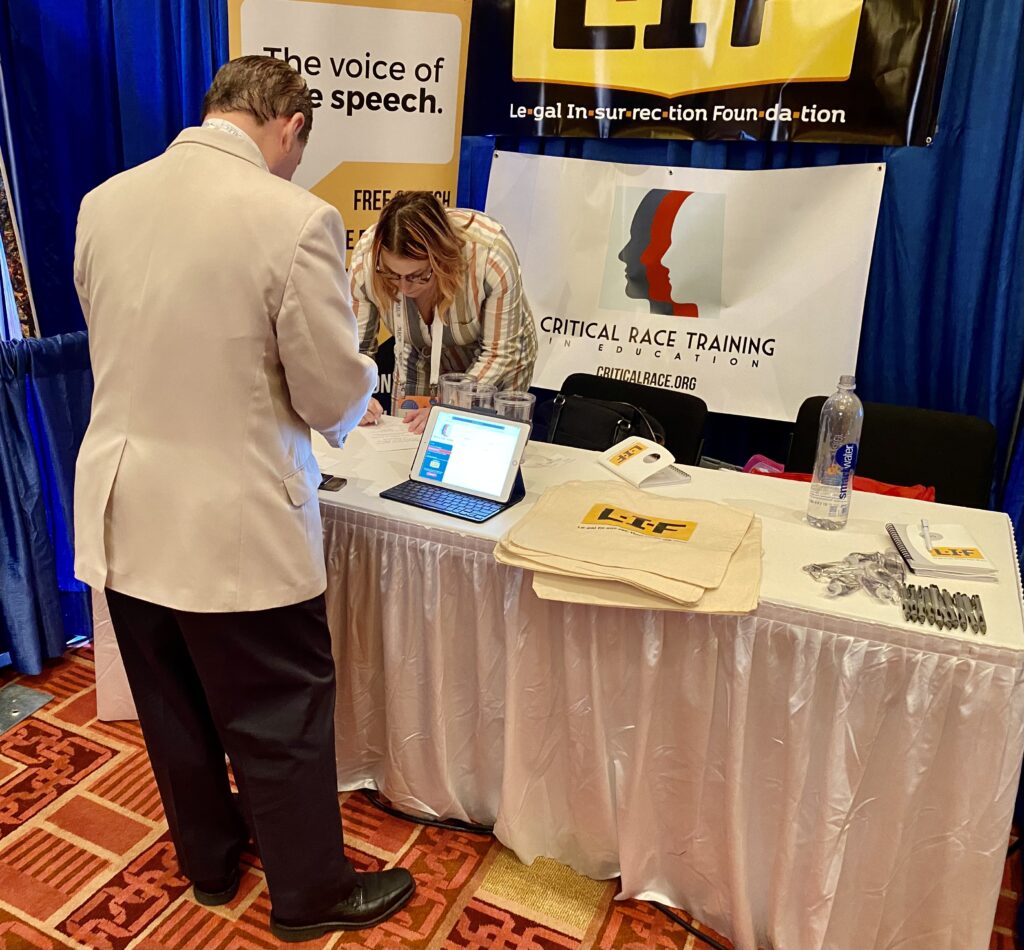 Increasingly, our focus is on K-12, and we changed the national and state discussion when we brought forward at Legal Insurrection two figures who quickly rose to national prominance. Nicole Solas, a mother from Rhode Island who was threatened with suit for filing public records requests regarding CRT, first told her story at Legal Insurrection. From our pages she landed dozens of national media appearances and she continues to dominate the media in Rhode Island. 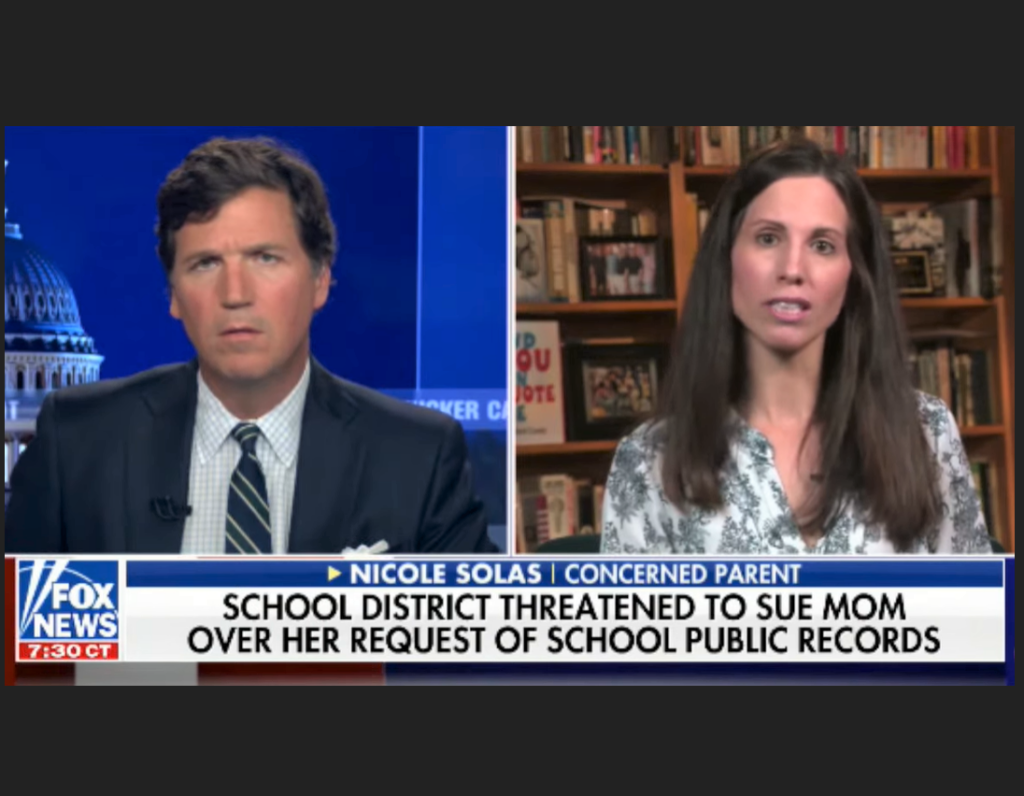 Similarly, Legal Insurrection brought forth the story of Ramona Bessinger, a middle school teacher in Providence public schools. Bessinger described the terrible impact of the new race-centric curriculum, with its propaganda-style pamphlets pushing an oppressor-oppressed racial narrative that has turned some students against her because she is white, and against their country. Bessinger’s story also took off with repeated and ongoing national media attention, and even an appearance on a top conservative Australian program. 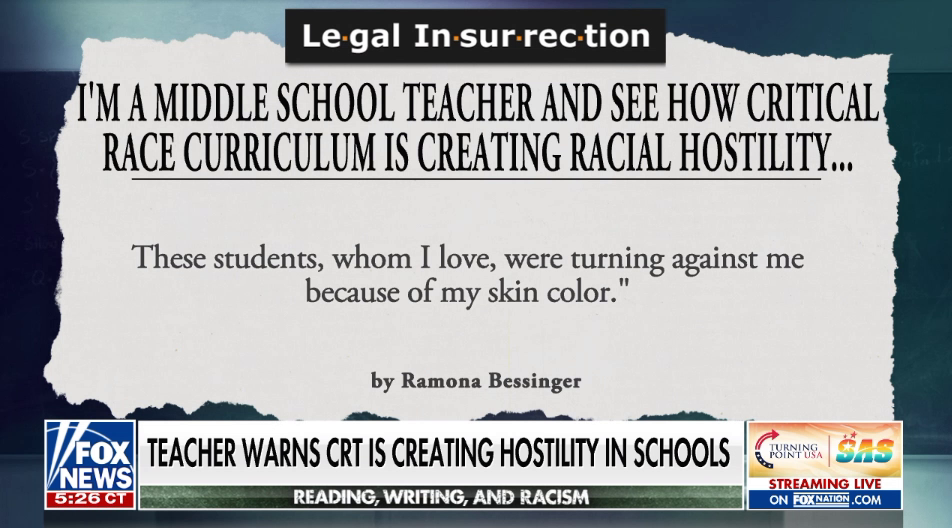 This is what Legal Insurrection website and now LIF do best — finding stories before others do, bringing them forward and pushing them to national (and international) prominence, altering and disrupting narratives.

We brought you live daily coverage of the Derek Chauvin trial, with Andrew Branca’s coverage every bit as good as his Zimmerman coverage in 2013, as well as our regular daily news coverage and analysis. We also have continued our public records investigations, including scoring a partial court victory against SUNY Upstate Medical University. We continue our research on the intersetional left, and expect to roll out in the next month or so a valuable resource deflating and debunking the “settler colonial” narrative used against Israel and the U.S.

We remain a leader on campus free expression issues. Our initially lonely, and then not so lonely, opposition to Cornell University’s proposed CRT mandates on faculty and students paid off, with the most radical elements on campus failing to get a strong consensus for mandatory CRT training and study. And we continue to shine a spotlight on right-of-center faculty under attack.

We do a lot more behind the scenes, that never makes it to these pages. We provide research and support to numerous groups and individuals, but we can’t tell you about it, or we’d have to, you know.

With all this success, we face challenges, including being decimated on social media. We are investing in alternative ways to reach new audiences and to retain existing audiences, but it will be expensive.

We do all this on a shoestring budget. Your donations go a long way. Because of our adorable but edgy name, some potential donors are wary, so we rely heavily on the people who know us best — our readers. We could do so much more if we had more resources. By donating you are becoming part of the fight alongside with us.

From our Legal Insurrection family to yours, thank you.

Personal note: Almost exactly a year ago I made a decision not to allow the negative energy thrown my way at Cornell Law School to drag me under. I am grateful to all of you who stood by me. My profile and platform now are larger than ever, the exact opposite of what they wanted. Success and happiness are the best revenge.

Everybody benefits from a support community. We’re happy to be yours.

“Success and happiness are the best revenge.”

Nice that Nicole Solas got an interview with a Heritage Foundation Outlet, Daily Signal. And they even mentioned Legal Insurrection, in a small way that deliberately downplayed what L.I. has done. Among all the other links they had to their own content within their article.

When I was a law student, everyone was required to take a course in constitutional law where we studied the Equal Protection Clause, Decisions like Bakke were understood to be short term transitional aberrations and Dr. Martin Luther King’s quote about judging based on character rather than skin color was applauded. We learned about individual rights and duties.

Your work is very important in preserving that understanding of our Constitution and the social compact. Many thanks,

Way to go Professor, they are quoting you now as an expert source.. as you are

Glad to donate! Strength in numbers!