Another point: Sen. Sinema is still a no on the $3.5 trillion “human” infrastructure bill. 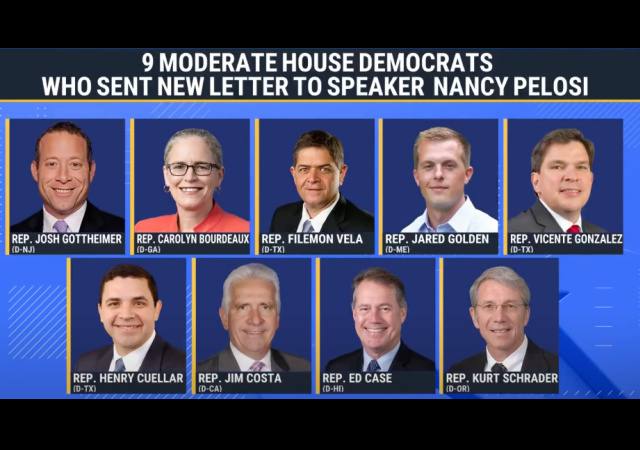 Congress returned from its August recess to Afghanistan on fire, COVID panic, and distrust of President Joe Biden.

Those stories have taken the headlines, but we should not forget about the hefty infrastructure bills that have torn apart the Democrats.

However, the moderate House Democrats have not dropped their demand to process the bills separately.

The nine Democrats include:

The Democrats urged their colleagues, the far-left progressives in the House, to stop holding the $1 trillion infrastructure bill hostage:

The challenge we face right now is that there is a standoff with some of our colleagues who have decided to hold the infrastructure bill hostage for months, or kill it altogether, if they don’t get what they want in the next bill — a largely undefined $3.5 trillion reconciliation package. While we have concerns about the level of spending and potential revenue raisers, we are open to immediate consideration of that package.

But we are firmly opposed to holding the president’s infrastructure legislation hostage to reconciliation, risking its passage and the bipartisan support behind it.

We can walk and chew gum, just as the Senate did. We can pass the infrastructure measure now, and then quickly consider reconciliation and the policies from climate to health care to universal pre-K that we believe are critical.

“Across this country, far too many communities are struggling with crumbling roads and structurally unsound bridges, outrageous congestion, lead-coated pipes and no broadband access,” the Democrats wrote. “You don’t hold up a major priority of the country, and millions of jobs, as some form of leverage. The infrastructure bill is not a political football.”

The Democrats also emphasized that a bipartisan group put together the $1 trillion bill. The bill also has support from the Chamber of Commerce and AFL-CIO:

Now, we are urging House leadership and the president to move this trillion-dollar, once-in-a-century measure through the House quickly, sign the bill, and get shovels in the ground and people to work.

We hear often in D.C. that we need big policy changes that “meet the moment.” This once-in-a-century infrastructure bill does just that: It meets the actual moment we are in. It is bipartisan at a moment when we are deeply divided. It will add jobs, build the economy, fix our crumbling infrastructure and help tackle climate change. Let’s take the win for American workers, and the nation, and pass the bipartisan infrastructure bill.

The Democrats have a narrow majority in the House. The far-left progressives or the moderates could trash both infrastructure bills.

The Democrats have a majority in the Senate because a Democrat sits in the White House.

Manchin urged the House Democrats to vote on the smaller bill:

“The House should put politics aside and do the same. With so much uncertainty in the world today, one thing is certain, we must unite and pass a critical priority of the American people—improving our nation’s infrastructure,” Manchin said in a statement.

“It would send a terrible message to the American people if this bipartisan bill is held hostage. I urge my colleagues in the House to move swiftly to get this once in a generation legislation to the president’s desk for his signature,” he added.

Sinema agreed with Manchin and made it known that she still does not support the $3.5 trillion bill.

Sinema described the bipartisan bill as “a historic win for our nation’s everyday families and employers and, like every proposal, should be considered on its own merits.”

“Proceedings in the U.S. House will have no impact on Kyrsten’s views about what is best for our country – including the fact that she will not support a budget reconciliation bill that costs $3.5 trillion,” stated her spokesman John LaBombard.

They’re better people than the GOPe swine who repeatedly betray us, led by that ChiComm rat McConnell:

He sleeps with one of the Chinese high ups daughters!

There’s somewhat credible leaks coming out from staff members that the RINO pieces of shit that votes for this crap have been told to keep their mouths shut about Afghanistan or the Democrats will torpedo this bullshit, strip the RINO kickbacks out of it, and pass it on a straight Democrat ticket.

You need to update. Pelosi has screwed us again with middle of the night antics. Everything will pass in one bill with a deem and pass manuever. It’s over at The Conservative Treehouse.