“The Anti-Defamation League has inserted itself into American politics under the guise of a non-partisan, civil rights organization…[but] the ADL does not represent even the Jewish community as a whole…” 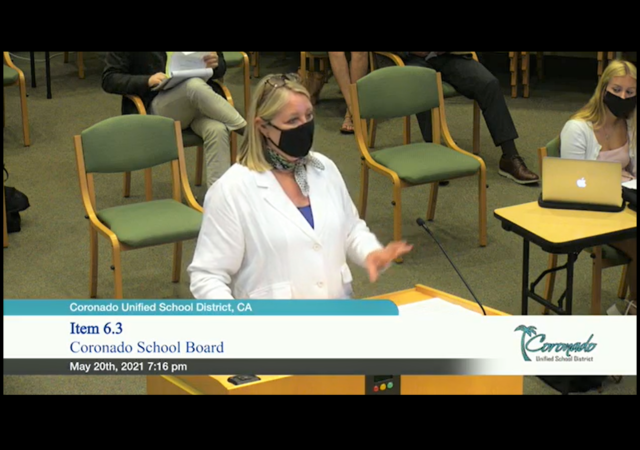 To nobody’s surprise, a new controversy has arisen surrounding California schools. This time, parents in the Coronado Unified School District (CUSD) are up in arms over what they say is the school system’s political indoctrination of their children under the guise of combatting racism.

Yet another branch of the Golden State’s public education system has landed itself in hot water via efforts to foster “equity”. This is not unique; we’ve reported on mulitple similar instances, especially over the past year. These include:

Now, Coronado parents are objecting to the imposition of the No Place for Hate program—run by the non-profit “civil rights” organization Anti-Defamation League (ADL)—on their children in school.

[A screenshot from ADL’s No Place for Hate website.]

The No Place for Hate (NPFH) program purports to help schools “improve your school climate through anti-bias and bullying prevention education” by guiding students to examine ethnic, gender, and racial “diversity” and its relationship to “bias”, “power”, and “justice”; some students say it also focuses on practicing “kindness” and striving for equity and inclusivity in schools. 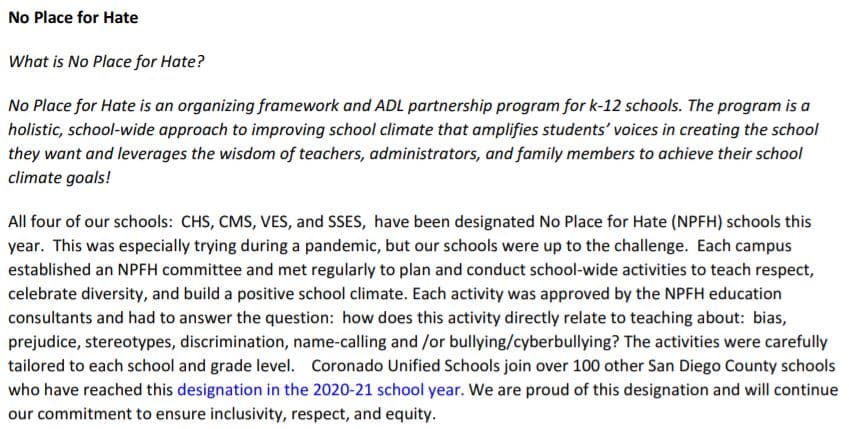 [A screenshot of Coronado Unified School District board meeting agenda explaining implementation of ADL’s No Place for Hate program in schools.]

While the ADL program sounds innocuous, some parents are outraged that the school district has partnered with the ADL at all, given its increasingly (especially in recent years) transparent partisanship. Indeed, many in the mainstream Jewish community have expressed anger at

…ADL CEO Jonathan Greenblatt, a former adviser to President Barack Obama, for turning the 100-year-old organization, whose mission is to monitor and expose anti-Semitism and other forms of racism, into a platform that “represents an echo chamber of left-wing Democratic politics.”

This is an issue LIF has been tracking for years. In fact, you can read Professor Jacobson’s 2017 post on the ADL’s new direction in Charlottesville is being exploited to attack freedom of speech and internet freedom, and watch a highly illuminating March 2021 panel discussion on the problem (featuring Professor J, Dr. Charles Jacobs of Americans for Peace and Tolerance, and Jonathan Tobin of JNS) here or below.

In May 2021, a Coronado Unified School District board meeting featured multiple parents and board members speaking out against the program and the involvement of the ADL in schools. At the meeting, one parent—a member of the Equity Committee—stated that, instead of focusing on remedying students’ scholastic deficits brought on by over a year of isolation and Zoom learning,

…The leadership of the equity committee—they’re hyperfocused on identity politics, gender pronouns, implicit bias, microagressions, and all of the ‘isms’…Do we have a rampant problem at CUSD that deserves all this urgent focus above all else right now…? Why [is] the community is being pushed on this really divisive SDCOE material?

You can watch the entire discussion below. [Note: At one point in the meeting, one speaker objects to the ADL on the grounds that it “attacks” and discriminates against Black and Arab groups. This particular criticism of the ADL is patently false, and is generally leveled at it by radically fringe anti-Israel or Islamist groups (such as Jewish Voice for Peace or the Council on American-Islamic Relations) in order to delegitimize ADL defenses of Israel.]

Last month, one San Diego resident wrote to The Coronado Times (and school board members):

As a decades-long activist in matters of civil rights and racial discrimination, I have been aware of the gradual transformation of the Anti-Defamation League (ADL) from being a civil rights organization strongly focused on antisemitism, the defense of Israel and other issues of specific importance to the Jewish community, to being an organization now more focused on pushing some agendas of the “progressive” wing of the Democratic Party. …

The writer—a professor emeritus of biology at San Diego State University—posted his analysis of the NPFH handbook and excerpts from nearly 60 articles and reports showing ADL’s leftist partisanship on the website of Californians for Equal Rights (an organization fighting Critical Theory Creep in California schools).

In the document, he noted,

ADL does not represent even the Jewish community as a whole and is regarded with distaste by a large segment of it. That disaffection increased in 2015 when the directorship passed from Abe Foxman to hyper-partisan, radically left Jonathan Greenblatt. ADL has long engaged in smear attacks and hate-mongering against organizations and politicians who push for enforcement of immigration laws and the reduced quotas for legal immigration as long recommended by various national commissions. It continues to do so. ADL opposes the letter and spirit of the 1964 Civil Rights Act and the California Constitution; it endorsed the pro-racial preferences Proposition 16 in California last November while that was opposed by 57% of Californians. In a recent Supreme Court case, ADL submitted an amicus brief supporting Harvard’s discrimination against Asian applicants for admission.

You can see the entire document, and read all the criticisms of ADL below.

Debunking No Place for Hate by Samantha Mandeles on Scribd

No word yet on whether this parental resistance be enough to force the Coronado school system to backtrack on working with the ADL. We’ll keep you posted.

The district should not worry about equity until they figure out how to teach all students reading, riting and rithmatic.

But they already tried that and it didn’t work. Now they want to ensure that nobody learns those things too well, because equity.

The funny part is that so many public schools have pretty much declared “writing” obsolete (since everyone has a computer!!) and barely teach it any more, as a matter of course. My nephew didn’t learn cursive because the “hip” public school teachers (with the IQs of 82 and SATs in the mid 800s) have surmised that Mankind has advanced beyond primitive handwriting …

When it comes to the ADL, very sadly, the oppressed has become the oppressor.

There seems to be a trend of civil rights organizations turning into political organizations. Look at NAACP (Black rights), HRC (gay rights) and ADL (Jewish rights). They all achieve the goal of their organization.

But when they achieve the mission – they have an existential crisis. Their relevance is diminished. So, rather than close-up-shop. or accept a small role of just monitoring compliance to ensure rights are not infringed – they expand their mission. That expanded mission inevitably moves them into the realm of politics. They also find that the new direction makes it easier to gets grants from the government – especially when Dems are in power (but really anytime because the swamp wants to support them).

They don’t care that their move into the political realm will piss-off at least 1/3rd of their constituents because they now get more funding from the government and from those who align with the new political direction.

As a result we are stuck with this legacy organizations forever. Always ready to hype any issue and feeding off of our tax dollars and the donations of leftist organizations. And eventually (as we see happening now) they become fronts for marxists.

To be fair, the ADL has been full of leftist toadies for a long time, now.

Long ago … when no one paid much attention to it. It is with increasing popularity among the mainstream that the ADL got more overrun with lunatic leftists. Before, few people even knew anything about it except that a lot of folks thought the name was kind of neat. But no one listened to anything the ADL had to say.

I would think a more “”equitable” outcome would be all students being proficient in math and English and be able to be a functioning adult able to gain employment and handle life but this whole scam in my eyes is to make sure that is not the outcome , that people will be more reliant on government handouts to further their globalization agenda

But failure of a bad idea is not always in a “good” direction.
The “Great Society” is a prime example.

But keep sending your kids into the pit to fight the snakes, cause that always works.

That was not meant to be a reply.

It would be fitting for the ADL and the NAACP to merge.

In turn, join up with the SPLC in that lovely building in Montgomery AL.

I don’t have specific expertise on the ADL or the specific ideological teaching vehicle device adopted by the Coronado Unified School District.

But I can say that the oppressor/oppressed paradigm is irresistible to large swaths of society. It’s pushing its way into all the professions. Example from just this morning:

the education professions have had a 30-year head start. Superlative source: LOSING OUR LANUAGE: How Multicultural Classroom Instruction is Undermining Our Children’s Ability to Read, Write and Reason (1999) by Sandra Stotsky, then a research associate at the Harvard School of Education.

Yet another argument for school choice and separation of school and state.

How many more examples do we need before we decide to get rid of America’s best example of totalitarian socialism?

ADL is an extremist organization. Any board member or school district who supports bringing the enemy into the camp is the enemy. Parents and citizens need to eject the insurrectionists and extremists from the public schools. They are anti-American and destroyers. This is simple: this is a plan to destroy the country from within starting with the indoctrination of children.

It’s not conspiracy thinking. It’s not nutty. This is the reality. If there ever were a time to engage, this is it.

The frontline for doing battle against these destroyers is shaping up to be parents, their friends and citizens at the local level. Americans need to reclaim their country, starting at the public school level.

The appointment of. Obama apparatchik Greenblatt as head of the Anti-Defamation League has been a disaster that turned the ADF into a far-left front. Synagogues and temples that have in the past contributed to the ADF should withdraw their support.

Basically, and I say this with regret, the ADL is now a hate group.