The saga continues: California’s Department of Education has released yet another iteration of its neo-Marxist-inspired, Critical Theory-based Ethnic Studies Model Curriculum for public schools. Even after five years of work (and who knows how much money) the latest (fourth!) version of the ESMC—to be voted on next week—has managed, somehow, to be worse than the last.

Last month, we detailed a litany of historical and epistemological problems with the neo-Marxist-inspired California Ethnic Studies Model Curriculum (ESMC) in our post, California Proposed Ethnic Studies Curriculum A Subterfuge For Anti-American And Anti-Zionist Activism. 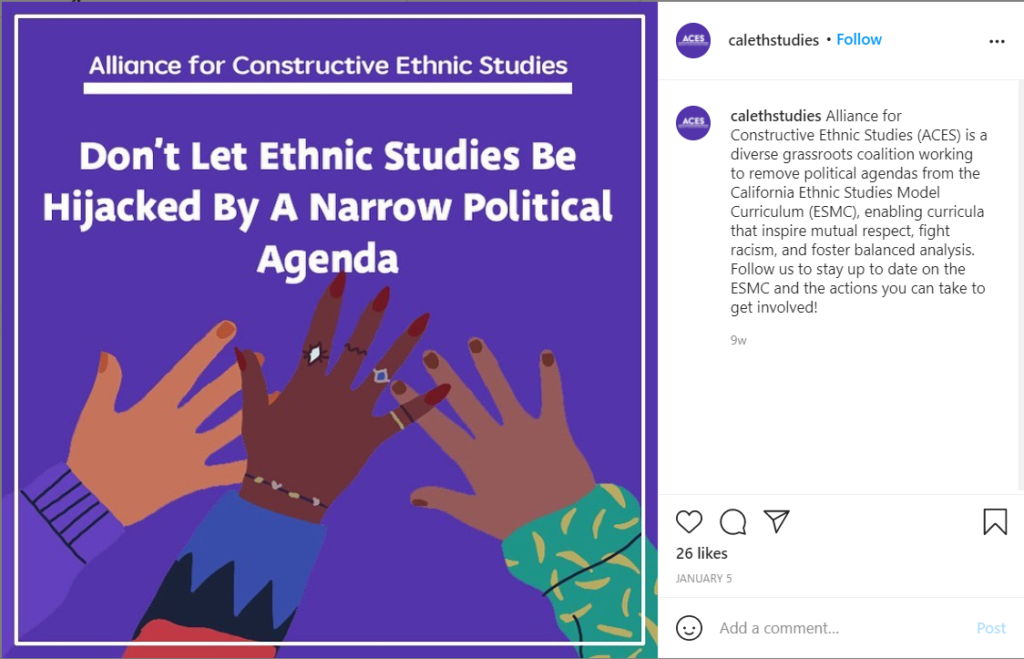 The [first two] drafts of the ESMC were, in the words of the Los Angeles Times,

an impenetrable melange of academic jargon and politically correct pronouncements. It’s hard to wade through all the references to hxrstory and womxn and misogynoir and cisheteropatriarchy.

…This curriculum feels like it is more about imposing predigested political views on students than about widening their perspectives.

In fact, as an op-ed in the Wall Street Journal summarized:

Excluded from California’s model curriculum are the white ethnic groups (Italians, Irish, Poles and so forth) studied fruitfully by scholars such as Nathan Glazer, Daniel P. Moynihan and Michael Novak. Also largely excluded are groups like Jews and Armenians who were persecuted abroad and sought refuge in America. The groups that dominate the curriculum are African-Americans, Latinos, Asian-Americans and American Indians.

Perhaps worse, the first draft included fawning endorsement of the Boycott, Divestment, Sanctions (BDS) campaign against Israel (and only Israel), and echoed classic anti-Jewish stereotypes in its discussions of Zionism and the Jewish state.

At the root of the ESMC’s flaws is its foundation in neo-Marxist Critical Theory—which, as Bret Stephens recently pointed out, is “not multiculturalism. It is not a way of exploring, much less celebrating, America’s pluralistic society. It is an assault on it…It is less an academic discipline than it is the recruiting arm of a radical ideological movement masquerading as mainstream pedagogy.” 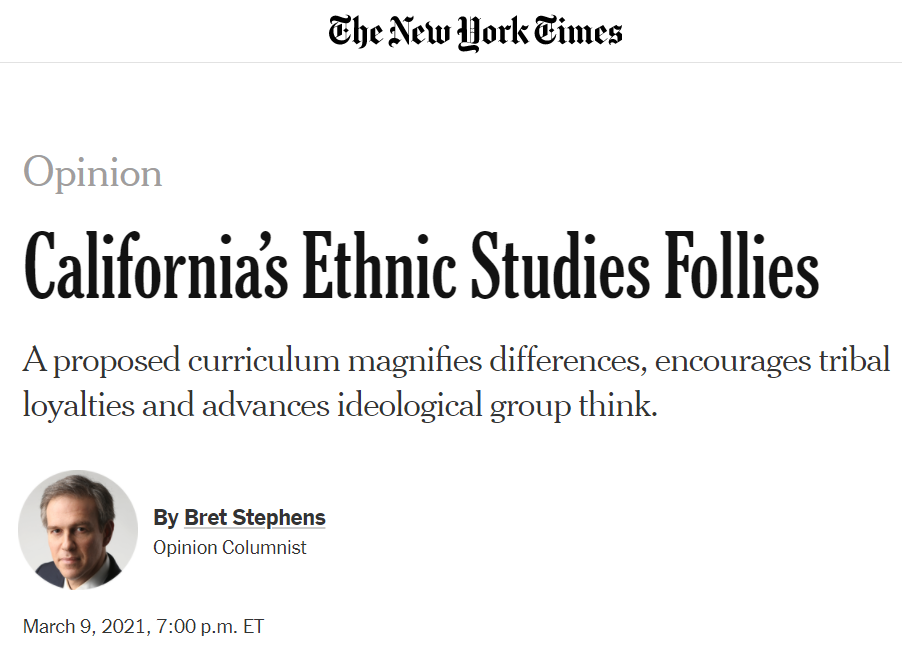 So, it’s no surprise that the ESMC project has repeatedly inspired nation-wide outrage.

In our previous post, we noted that thousands of public comments and several revisions of the original ESMC (you can see versions one, two, and three here) had actually resulted in a marginally improved third draft. But, we wrote, even that third version presented big problems. As an op-ed in the Jewish Journal explained, even if they were to use the third ESMC version,

…students will have learned almost nothing about any aspect of Jewish culture, history, or traditions. About oppression, however –– which is mentioned over 60 times in other parts of the curriculum and just once in reference to Jews –– what children will be taught about Jews is that “internalized oppression” leads Jews to change their names in order to hide their Jewishness. And they will learn that “this practice of name-changing continues to the present day.”

Now, in view of ongoing backlash, the DoE has released its fourth and likely final draft of the curriculum, which is set to appear before the Board of Education at its meeting on March 16-18.

One might think that with more than 80,000 public (and often critical) comments in total, scathing letters signed by ignored ethnic minority groups, and an exhaustive scholarly analysis addressing the ESMC’s misuse of data, the fourth and final version of the document would’ve dispensed with previous versions’ basis in Critical Theory. But materials from the newest version, released last week, show that the latest revisions have exacerbated the ESMC’s manifold problems.

It turns out that revising the ESMC has been a game of whack-a-mole. Every time some derogatory anti-Jewish content is removed, other problematic content shows up elsewhere. One draft’s antisemitic rap song and stereotypical slurs get removed, but in the next draft Zionism is inappropriately equated with oppressive Western colonialism, and in the subsequent draft antisemitic sources and pro-BDS role models are added. 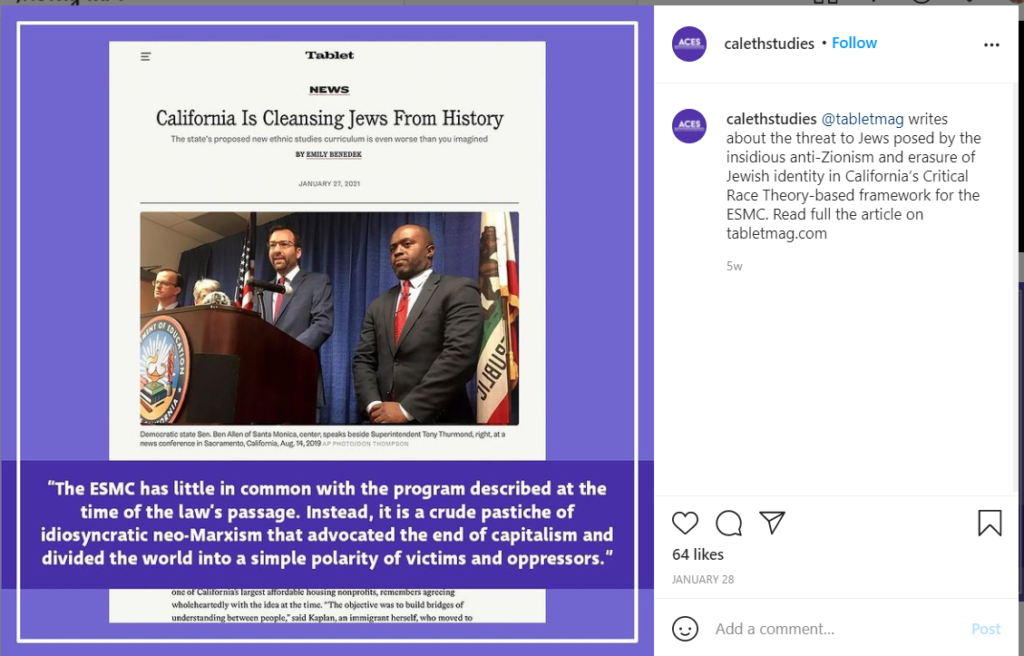 Draft 4 shows a clear endorsement of the Critical ES victim/oppressor paradigm that has been foundational to each draft thus far. “While the ESMC should engage students in open and honest discussion about difficult topics, teaching students to focus on being victims of oppression, rather than empowering them with skills and pathways to succeed, is a terrible injustice,” says Mauricio Cevallos, founder of Latinx for Quality Education. “The latest draft of the ESMC still fails to inspire and empower; its Critical Ethnic Studies framework focuses more on dividing students rather than on teaching them to have pride in their heritage, empathy and respect for others, and instilling confidence in them to fulfill their dreams.”

In a surprising procedural move, the fourth draft also added a new lesson to the ESMC, “An Introduction to Arab American Studies” – the only lesson not subjected to a public comment period. The lesson raises a number of concerns about antisemitism and includes assigned reading (Edward Said’s 1978 book Orientalism) that repeatedly equates Zionism and Israel with colonialism, erasing 3,000 years of Jewish history, identity, and rights in their ancestral home. Other materials promote blatantly anti-Israel narratives – e.g., “the state of Israel was founded on Palestinian land” (Draft 4, Ch. 4, citation in footnote 29). 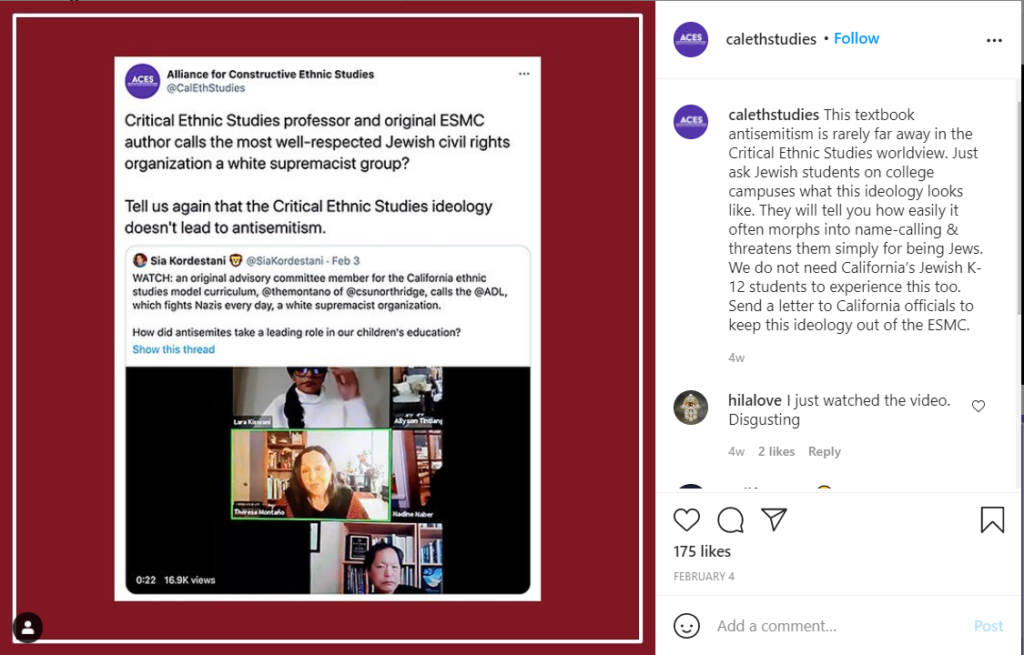 Other groups have also noted that the fourth iteration seems to have ignored scrupulously researched and painstakingly assembled suggestions for improvement. 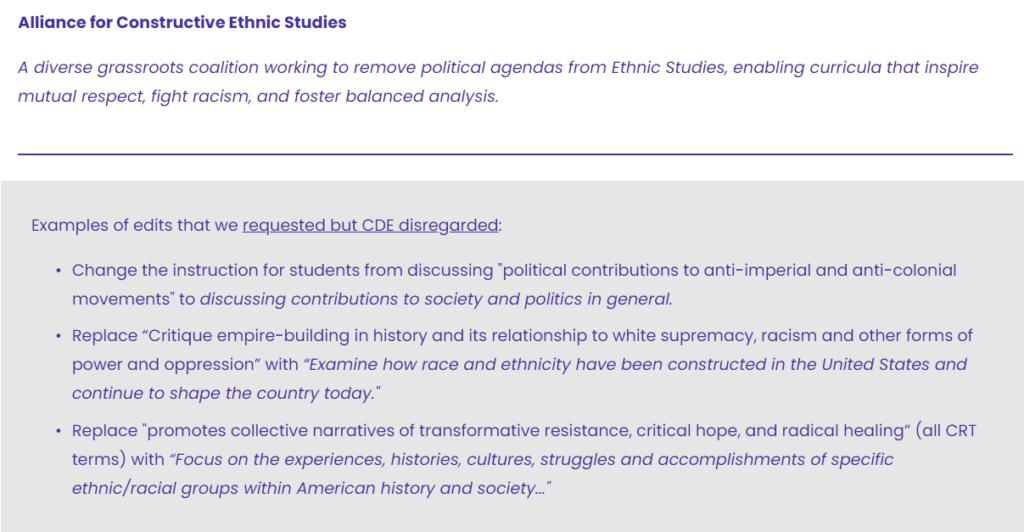 The pro-Israel group StandWithUs, which had composed a comprehensive list of reasonable suggestions to improve ESMC #3 (that were evidently ignored) noted its concern about the ESMC’s latest failures, saying:

We remain concerned about multiple new and old problems, as well as the lack of transparency regarding the recently added Arab American Studies lesson… 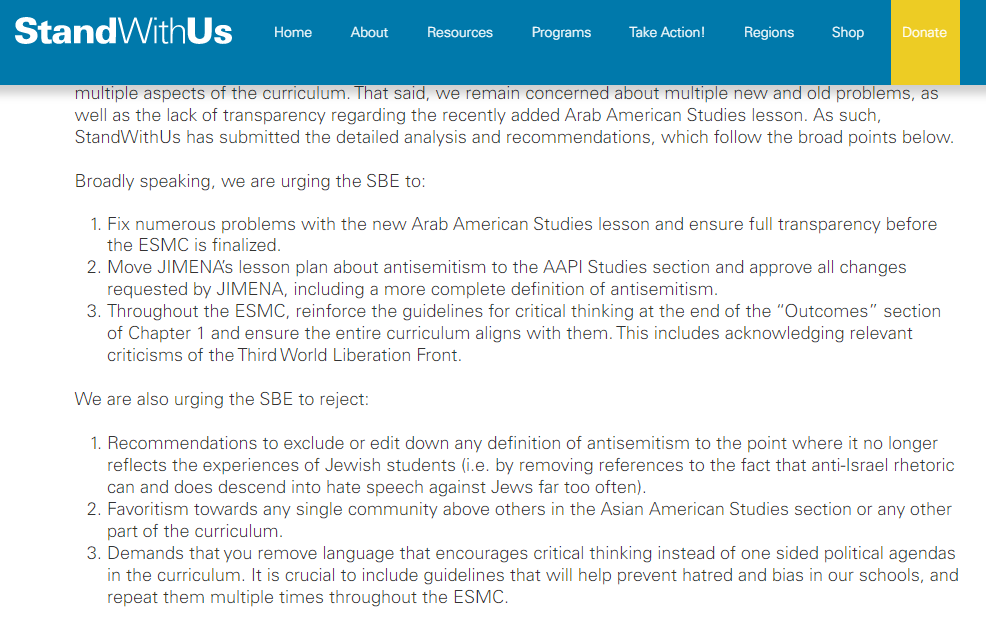 You can see ACES’ and StandWithUs’ updated list of edits and suggestions for ESMC #4 here and here, respectively; and you can submit your own public comments on the newest proposed (and clearly inadequate) revisions by Friday, March 12th at noon PST by emailing [email protected] or using this template letter (provided HERE by the Amcha Initiative).

Will the California DoE finally take notice of its constituents and protect its children from indoctrination?

California is a warning to Republicans about losing states, from Raegan’s home state to the center of critical race theory.

These are not studies. They are indoctrination programs.

One would think “Palestine” is the 51st state and being attacked by a foreign nation.

The fundamental problem seems to be that Nazis are writing the curriculum and whenever the community protest about the content it’s rewritten by the same people that caused the problem in the first place. Unless an independent group are employed to write a non-racist etc curriculum it will never be satisfactory.

The other problem is the sane are being driven out of education, especially higher ed. The nutjobs have been in charge for awhile now.

The fundamental problem is the state’s monopoly on educational institutions. I can understand the state’s general interest in promoting literacy and numeracy,

Is the idea of providing vouchers to parents who can then choose how and where they prefer their children educated, is the idea dead?

They took out various stuff about accomplishments and replaced it with self-righteous grievance.

I am particularly offended by using Jewish examples to support other narratives while essentially leaving out the Jews. Jews should stand up and reject the whole agenda until this stops.

Since they put in Arab studies without public comment, can this now be forced to a statewide referendum on the whole stinking mess? That’s how one fixes things in California, by referendum. Put the whole ESC up for public up/down vote!

Referenda in California get tossed out by tyrants in black dresses.

You’re right, but at least make them do it. In the same sense I find it much better that the Dems were forced to steal the recent election in an obvious way rather than people being able to imagine that it wasn’t stolen. If they’re going to cheat, make them do it in the open.

This is so despicable, how the vile Dhimmi-crats promote Jew-hate and Israel vilification — straight out of the Muslim supremacist and jihadist propaganda playbook — to impressionable young minds. This is evil stuff.

The world has already experienced the Democratic fascist Critical Jew Theory but it has been about 80 years ago.