Critical Race Theory, together with far leftist ideological hostility, is being injected deep into public education in the largest state.

We’ve been tracking the development of the California Ethnic Studies Model Curriculum (ESMC) for quite a while now. You can see some of our past coverage in

In case you missed our previous coverage, here are the basics:

As The Forward explained here, the California ESMC was created in accordance with a California state law: “AB 2016, a five-year-old statute mandating a commission to “develop, and the state board to adopt, modify, or revise, a model curriculum in ethnic studies.” Indeed, the JWeekly reported, “by law, the 11-member body, responsible for policy-making decisions affecting K-12 schools in the state, must approve the curriculum by the end of the month [of March 2021], a deadline the [California state] legislature already delayed one year.”

Enter the ESMC, the first version of which ignited a firestorm upon its release to the public during the summer of 2019. In fact, the Sacramento Bee recalls that between the first draft and the subsequent three (still inadequate) versions,

In the past 18 months, the Board of Education has received tens of thousands of public comments regarding the model curriculum. More than 38,000 of them were related to the sections of the curriculum centered on Jewish Americans and/or anti-Semitism, nearly 26,000 regarded Arab Americans and close to 10,000 focused on Armenian Americans, according to a summary chart attached to Thursday’s meeting agenda.

But there is more amiss here than the (many and varied) factual errors found within the curriculum’s portrayal of America’s ethnic minority groups. As Tammi Benjamin of the California-based non-profit AMCHA Initiative has argued, the curriculum’s entire agenda—rooted in the neo-Marxist framework known as Critical Theory—is less about fostering children’s critical thinking skills and more about pushing children to become social justice activists.

While on the surface, the curriculum approved by the state appears improved over the rejected first draft, it remains firmly rooted in the principles of Critical Ethnic Studies, which unlike the broader field of ethnic studies, has a politically- and activist-driven mission that will incite hate and division and is dangerous for all high school students. Most profoundly concerning for the Jewish community is the portrayal of Jews, filtered through the lens of Critical Ethnic Studies, as ‘white’ and ‘privileged’. At a time when anti-Jewish sentiment, hostility, and violence have reached truly alarming levels, indoctrinating students to view Jews as ‘white’ and ‘racially privileged’ is tantamount to putting an even larger target on the back of every Jewish student.

It is reckless of the state to pour millions of taxpayer dollars into a curriculum that is based on no credible research and is steeped in Critical Ethnic Studies. For those of us who closely monitor and combat bigotry, we know firsthand that a Critical Ethnic Studies approach is very dangerous for all students, and we plan to fight tooth and nail against legislative attempts to make this curriculum a high school graduation requirement. What happens next in California, particularly as it relates to a graduation requirement, is crucial since we know other states often follow California. 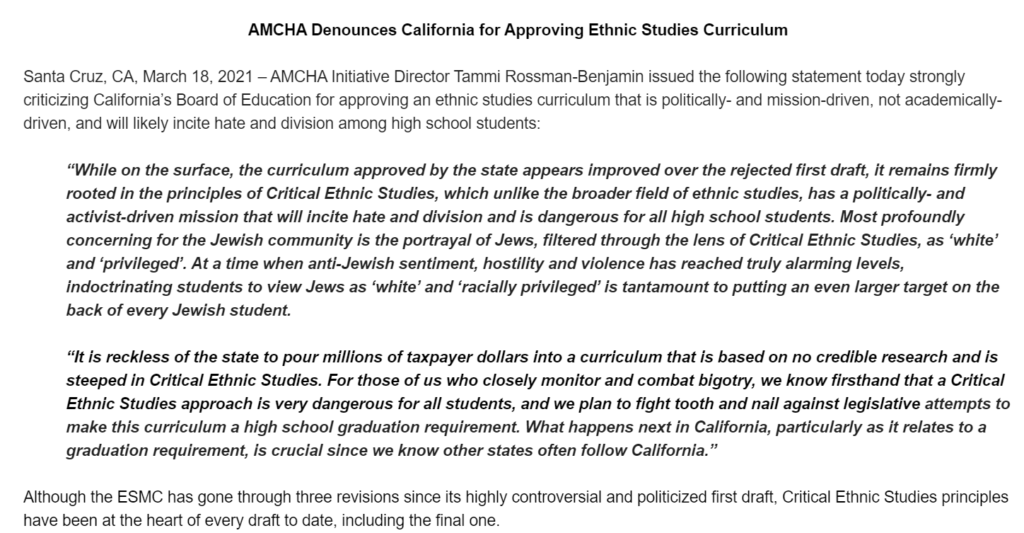 In a recent article, journalist Christopher Rufo noted of even the most recent ESMC version:

In theoretical terms, the new ethnic studies curriculum is based on the “pedagogy of the oppressed,” developed by Marxist theoretician Paolo Freire, who argued that students must be educated about their oppression in order to attain “critical consciousness” and, consequently, develop the capacity to overthrow their oppressors. Following this dialectic, the model curriculum instructs teachers to help students “challenge racist, bigoted, discriminatory, imperialist/colonial beliefs” and critique “white supremacy, racism and other forms of power and oppression.” This approach, in turn, enables teachers to inspire their pupils to participate in “social movements that struggle for social justice” and “build new possibilities for a post-racist, post-systemic racism society.”

Despite ongoing protestations from scholars and minority interest groups alike, on Thursday, March 19, the California State Board of Education voted unanimously to pass the current ESMC.

Implementation of the ESMC is not yet required in California public schools, but it may be soon:

While the original 2016 bill said only that the state would “encourage” school districts to offer ethnic studies as a course based on the model curriculum, a new bill currently in the assembly would make its adoption mandatory for K-12 schools. Last September, Gov. Gavin Newsom vetoed the new bill, wanting to wait until “clear course guidelines” had been approved.

The @latimes enthusiastically endorses #CriticalRaceTheory in a “news” story on approval of its controversial ethic studies curriculum. https://t.co/PkshZ4ccm9 pic.twitter.com/JlMvHgH0RY

Yes it is. They are learning other lessons as well:

Some fraction will emerge from this as zealous SJW’s, but most will merely be cagey cynics trying to keep their heads down, which is bad enough. I speak as the parent of children who went through public high school in a “top” California school district.

California was already headed off a cliff. This will just accelerate the decline. I wonder if the Roman empire decline included some similar divisive ideology.

Divide people by race and gender. Make them resent each other. Open the border so one race has an advantage over all others. Sell the self-destruction to the people as good.
> Division = equals = Strength.
> Discrimination = equals = Anti-Discrimination
> Hate – equals = Love

You could not plan a better way to destroy a country.

If Gavin Newsom shocks us by again standing against this maybe he is one of the better Democrat governors?

It is worth mentioning because we the governor can veto this and if memory serves me correctly this one has before and the jungle primary could easily end up barring a Republican candidate.

That said if he doesn’t veto ignore everything I just said.

Terrifying! Teaching racism in Californistan is a real option now, and may soon be mandatory.

ACW2 coming to you soon 🙁

It’s a “misperception” that CRT creates divisions? I’m glad the official truth has cleared that up.