Susan Sarandon Protests Outside AOC’s Office: “We are losing hope that you represent us”

Susan Sarandon Protests Outside AOC’s Office: “We are losing hope that you represent us”

“I’m here to say to the squad, and especially AOC, who, you know did make a lot of promises, that we still have faith in you and we would like to see if you have a better plan than we’ve been able to see, please share it” 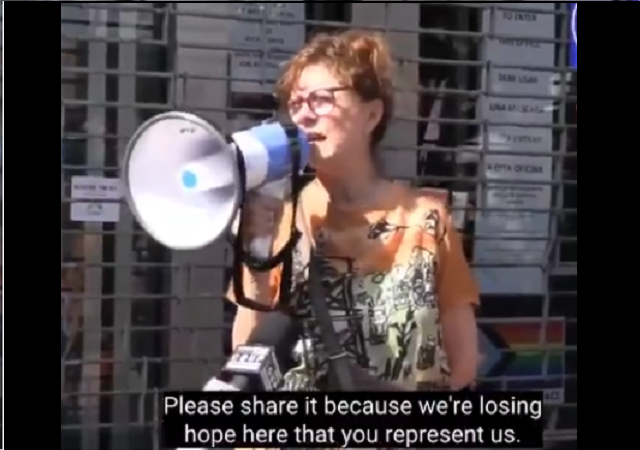 Pro-communist activist and has been Hollyweirdo Susan Sarandon came under leftist fire for expressing disappointment that socialist New York Rep. Alexandria Ocasio-Cortez and “the Squad” have not enacted Medicare-for-All. Or fought for it. Or something.

Sarandon, you may recall, got herself arrested back in 2018 while attending a protest of then-President Trump’s immigration policies.

Now that Biden is occupying the White House, Sarandon no longer “demands” an end to “all detention camps.” Presumably, they are super groovy and kind of cool under Biden, like far out communes, dig?  Never mind, the inhumane conditions, with “pods” overflowing with thousands of illegal immigrants . . . who are unvaccinated and go untreated for the Wuhan coronavirus before being unceremoniously dumped into American cities and towns (most of which appear to be current “hot zones,” i.e. those seeing increases in positive covid tests).

Sarandon sees the real problem, though. It’s that AOC is not doing enough to single-handedly transform the United States into their shared vision of commie utopia.

. @AOC "If you have a better plan than we have been able to see please share it… Cause we're losing hope that you represent us. " –@SusanSarandon during a protest outside AOC's Office pic.twitter.com/0N3obREtEx

In a video obtained by The Independent, the 74-year-old actress used a megaphone to address the gathering crowd. Sarandon expressed her disappointment in AOC and “the squad.”

“I’m here to say to the squad, and especially AOC, who, you know did make a lot of promises, that we still have faith in you and we would like to see if you have a better plan than we’ve been able to see, please share it,” Sarandon said.

She added, “If there’s a pathway you’ve got that we’re not aware of please share it. Because we’re losing hope here that you represent us.”

The protesters demanded AOC and others “use every legislative tool available to pass Medicare-for-all in Congress, including withholding and leveraging your votes to demand single-payer as a condition for passing legislation,” per their website.

They also want politicians to “use your huge social media followings, ability to get press, and celebrity to organize direct actions for Medicare-for-all.”

Everyone saw the leftie backlash coming.

Just because she isn’t represented by AOC directly doesn’t mean she shouldn’t be able to voice her concerns about what AOC/the Squad are doing with their time in Congress. Thank you @SusanSarandon for speaking out, in spite of the backlash it will bring. ❤️ https://t.co/s2hu4Gizyb

And come, it did ( some tweets via Twitchy).

This is wonderful. Ms. Susan with a net worth of $60,000,000(a lot of 0s) lecturing @AOC on representation…Here is an idea…donate your entire fortune to the poor. Give it all up Ms. Susan…It must be wonderful being a socialist multi-millionaire & lecturing #WOC like AOC… https://t.co/xOxcvZWxkV

Attacking AOC for not starting the revolution is infantile ultraleftism. https://t.co/Fz3qb4e2HH

I have no idea what the hell is going on anymore. https://t.co/mg7tezt8X6

Proof no. 5957291 that @SusanSarandon doesn’t understand politics at all. https://t.co/nBINmFuY6J

Does Susan Sarandon think @AOC has a magic wand she can wave to create 60 Democratic seats in the US Senate?

This! I’m really unclear about the motivation of protesting AOC’s office, unless they’re systematically doing the same thing with every elected official that is pro M4A.

AOC and the rest of the clowns in the squad only care about themselves.

I’m guessing tweeter above, FavioPfizer, fails to see that he is what he hates.

Because “talking to your racist family members instead” is going to get a whole lot of legislation passed.

Never forget where Cortez came from: a casting session!

She’s a functional moron. Don’t let the mere fact that she’s ‘in Congress’ ever mask that with us.

How low an IQ do you have to believe the BARMAID ever did represent you? Again we need a politcal IQ test to serve and vote.

If we did have one, the Democrats would demand affirmative action points be applied to the results and then falsify them anyway to promote their craziest elements and bar as many republicans as possible.

If like making facts up..
And getting caught illegally parked
If you don’t have half a brain..

You could protest McConnell
And the orange man bad
Sell out your supporters
For more campaign cash..

The rage they expended on Trump and his supporters has nowhere left to go now that their heroes are in power, so naturally they aim it at their heroes.

Nuke her from orbit. It’s the only way to be sure.

The likes of Susan put the ‘bull’ in bullhorn.

“You shall die a peasant’s death!”

Has AOC ever been seen in her NY office?

Has she ever seen the inside of a book?
Not likely.

It’s funny that you never engage on the substance of what anyone says. Do you even know the reasoning behind any of AOCs policy positions ? I’m not talking about your assertions about her thoughts but what she has actually said in terms of policy?

“Cause we’re losing hope that you represent us” – you mean elderly multimillionaires who don’t live in her district??

Extra points for you.

Did she take her shirt off?

No, then nothing to see here.

She was hot back in the day but I doubt it’s worth seeing now. Not being mean, I’ve gotten old too and nobody wants to see me unclothed. It’s just the way of things.

In all of recorded history has there been a less meaningful moment than when Susan Sarandon protested outside AOC’s office?

Well, yeah… anytime Jane Fonda has shown up for anything has been meaningless.

Who knew that Susan Sarandon lives in the Bronx?

Cognitive dissonance.
… it is in the Left’s DNA