Israeli Foreign Minister Lapid: “Iran is not just an Israeli problem, but an exporter of terrorism, destruction and instability that harms us all.” 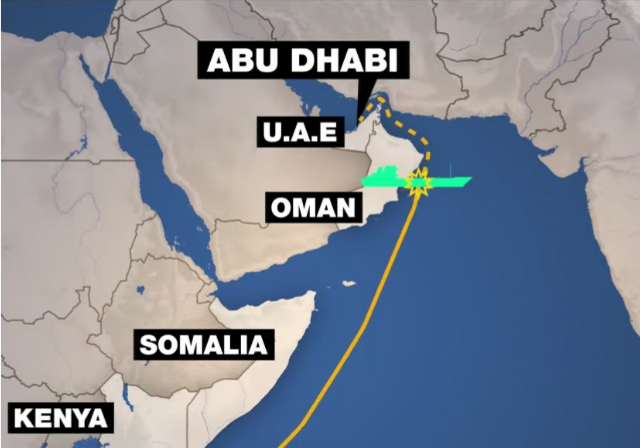 Iran is behind Thursday’s deadly drone attack on an Israeli-owned oil tanker, Israeli officials reveal. Two European crew members, a British and Romanian, were killed in the attack on a ship off the coast of Oman in the Arabian Sea.

The attack was carried out by multiple armed suicide drones, a tactic perfected by Iran and Iranian proxy jihadi groups in their terror campaign against neighboring Arab Gulf countries.

The “strike earlier this week was apparently carried out by a number of Iranian drones that slammed into the ship’s living quarters underneath the vessel’s command center as it sailed off the coast of Oman in the Arabian Sea,” The Times of Israel reported citing official sources.

The Israeli government demanded an international response to growing Iranian aggression in the high seas. “Israeli Foreign Minister Yair Lapad called for a tough response and said he was in consultation with his British counterpart Dominic Raab, and that the issue would be taken to the UN, the BBC reported.

This is not the first Iranian attack of its kind in the international waters. In March, an Israeli-owned cargo ship was hit by an explosion, probably caused by a sea mine or missile, in the Gulf of Oman.

A Briton and a Romanian were killed when an Israeli-managed petroleum product tanker came under attack on Thursday off the coast of Oman, the company said on Friday, in an incident that Israel’s foreign minister blamed on Iran and said deserved a harsh response.

There were varying explanations for what happened to the Mercer Street, a Liberian-flagged, Japanese-owned ship, with Israeli-owned Zodiac Maritime describing the incident as “suspected piracy” and a source at the Oman Maritime Security Center as an accident that occurred outside Omani territorial waters.

Iran and Israel have traded accusations of attacking each other’s vessels in recent months and Israeli Foreign Minister Yair Lapid said he had told Britain’s foreign secretary of the need for a tough response to the incident in which two crew members, one British and the other Romanian, were killed.

“Iran is not just an Israeli problem, but an exporter of terrorism, destruction and instability that harms us all. The world must not be silent in the face of Iranian terrorism that also harms freedom of shipping,” Lapid said in a statement.

U.S. and European sources familiar with intelligence reporting said Iran was their leading suspect for the incident, which a U.S. defense official said appeared to have been carried out by a drone, but stressed their governments were seeking conclusive evidence.

The incident should be of great concern to the Western economies dependent on the oil supply from the Middle East. The drone attack took place near the strategic Strait of Hormuz, a narrow waterway where ships carry one-third of the world’s oil supply.

Iran has repeatedly used attacks on the world’s busiest oil transit choke point to intimidate the West and neighboring Arab countries. In June 2019, Tehran attacked Norwegian and Japanese oil tankers in the Gulf of Oman.

And so it begins. Happy BUYden?

China is running the show. They have Biden in their back pocket. (Who doesn’t?) And now they’re allied with Iran, having bought them off.

China is attacking Israel, which is really an attack on the free world.

It’s easy to blame Biden, but he’s just a dummy with Susan Rice’s and Antia Dunn’s hands up his rear-end.

We have American traitors running our nation, from top to bottom.

Never understood the term “Suicide Drone”. Drones, UAV’s, and R/C aircraft are by definition pilotless. If the remote pilot doesn’t intentionally cause his own death by flying his aircraft into the target, how is that suicide?

To maintain the spirit of the thing, each pilot wears a bomb belt. When the drone detonates, so does the b0mb belt.

You know, there’s been quite a few newbie crashes at the R/C airfield I go to, and we’ve been looking for a way to reverse that trend…

You win the internet for the day! 🙂

I’m hoping to get noticed and offered the chance to write a guest entry on a famous website.

You attack a nuclear-armed nation and back it into a corner, forcing it to defend itself against an existential threat.

If that isn’t suicide, I don’t know what is.

You’re talking about a larger strategic concept, and I agree with your sentiment.

What I’m talking about are news headlines that use nonsensical and inaccurate terminology.

Kamikaze drone would be more apt

… shouted the botany hobbyist unclear of the concept.

I believe the normal term used is ‘missile’.

You could I guess argue that if the drones were just flying around looking for a target and were directed to attack the tanker only after already airborne then ‘missile’ might not sufficiently describe their capability.

I doubt that’s what happened.

I do though recognise that this is a viable option but I still wouldn’t describe that behaviour as suicidal drones. I would like instead to propose a new term: Loiter munitions.

. . . and that the issue would be taken to the UN, the BBC reported.

Would that be the same “UN” that is now dominated by Arab terrorist states that regularly condemn Israel for various and sundry fabricated humanitarian violations?

If it’s that UN then I wouldn’t expect much to happen.

Tit for tat. I fully support Israel blowing up centrifuges. This is tat.

Tit for tat has not been effective, Iran deserves to have their ass whipped, cripple their ability .to wage war.

Payback will be coming. Iran still has no idea about how badly this will go for them.

And, vile Xi-den, the Dhimmi-crats and European dhimmi, Leftist useful-idiots are all enabling Iran’s belligerence and terrorism, with their fecklessness and constant kowtowing to the Iranian regime. Their collective behavior in the face of Iran’s utterly brazen bellicosity is despicable and indefensible.

Maybe Israel needs to take out Iran’s new oil terminal located near Jask port on the Gulf of Oman, just south of the Strait of Hormuz, that allows ships headed into the Arabian Sea and beyond to avoid the narrow route. If Iran wants to sink oil ships, then they need to suffer similar consequences!

Simpler to blockade Iranian ports so they can’t sail in or out. Worked in WW I when allies blockaded German ports so nothing went in or out. That was in response to their “unrestricted submarine warfare.” Hurried the end of the war, even if it doesn’t seem like it did.