“This was indeed an operation by Iran. That is clear.” 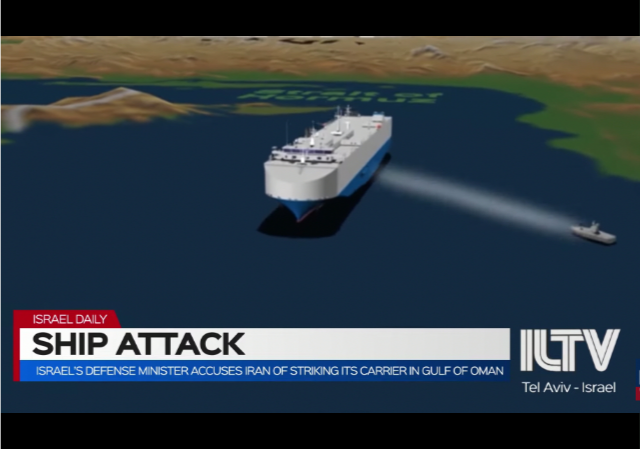 Prime Minister Benjamin Netanyahu has confirmed the Iranian hand in Friday’s explosion on an Israeli-owned cargo ship in the Gulf of Oman.

“This was indeed an operation by Iran. That is clear,” the Israeli prime minister said, referring to the attack on an Israeli ship sailing towards the Strait of Hormuz.

The Israeli military is also convinced of Iran’s complicity in the attack on the high seas.

“Just over the weekend we got a reminder in one of these theaters of one of the greatest threats in the region, Iran, and we got a reminder that Iran not only is a nuclear threat, but that it spreads and carries out terror and operations against civilian targets,” head of Israeli armed forces, Aviv Kohavi, said on Sunday.

The Israeli merchant vessel bound for Singapore was “hit in its bow by a missile or underwater mine causing damage,” the Jerusalem Post reported. The crew emerged unscathed and the damaged ship made it ashore, Israeli media say.

Israeli Prime Minister Benjamin Netanyahu on Monday accused Iran of attacking an Israeli-owned ship in the Gulf of Oman last week, a mysterious explosion that further spiked security concerns in the region. (…) Netanyahu told Israeli public broadcaster Kan that “it was indeed an act by Iran, that’s clear.”

“Iran is the greatest enemy of Israel, I am determined to halt it. We are hitting it in the entire region,” Netanyahu said. Iran promptly dismissed the charges.

The blast struck the Israeli-owned MV Helios Ray, a Bahamian-flagged roll-on, roll-off vehicle cargo ship, as it was sailing out of the Middle East on its way to Singapore on Friday. The crew was unharmed, but the vessel sustained two holes on its port side and two on its starboard side just above the waterline, according to American defense officials.

The ship came to Dubai’s port for repairs on Sunday, days after the blast that revived security concerns in Mideast waterways amid heightened tensions with Iran. (…)

Over the weekend, Israel’s defense minister and army chief had both indicated they held Iran responsible for what they said was an attack on the vessel.

The attack comes as President Joe Biden is weakening the sanctions pressure on Iran in hopes of cutting an Obama-style deal with the regime. Tehran has responded to the Biden administration’s measures with intensifying rockets attacks on the U.S. troops in Iraq.

Iran has a history of using attacks in the Strait of Hormuz to intimate Western powers and neighboring Arab countries.

In June 2019, Tehran attacked a Norwegian-owned and a Japanese-owned oil tanker in the Gulf of Oman. Following the attack, the head of Iran’s Islamic Revolutionary Guards Corps (IRGC), a U.S.-designated terrorist group, boasted the regime’s ability to target foreign vessels on the high seas. Iranian “missiles can hit with great precision carriers in the sea,” IRGC chief Hossein Salami claimed.

These recent Iranian acts of aggression in the Strait of Hormuz should be a matter of global concern. About one-third of the world’s oil supply goes through this busy shipping lane.

Biden launched attack in Syria to remind the Iranians that they must focus on attacking Israeli assets. The(Obama/Jarrett/Rice) Harris-Biden admin wants to force Israel to accept “Palestinian” sponsored “peace” agreement. Weakening Israel is the only way to push this.

You can bet John Kerry was instrumental in the Iranians planning the attack.

Israel needs to act in its best interests

They should take out John Kerry while he’s airborne in his private (that is, his wife’s) jet.

Let’s not forget to thank the peanut farmer from Georgia for allowing Iran to become the threat that it is.

Did Carter cause the military to f up the rescue?

At the time, I thought we should have conducted a swift smack down, not just a rescue.

I see the billions that Obama flew over to Iran on a private jet in the middle of the nice is being used in such a constructive and positive manner to better the lives of the Iranian citizens.

…middle of the night….

Please, Israel, please do not launch a proportional retaliatory strike.
Take out an entire city or two.

No cities with civilian populations should be destroyed but every Iranian military base would be fair game. And the mullahs.

Show me a war where civilians did not suffer.

There’s a huge difference between civilians unfortunately suffering as an unintended byproduct of legitimate military action, and a deliberate military strike on a civilian target, which is a war crime.

Lol. You sound like you think McNamara and Bush and Obama had winning strategies. They didn’t. War is horror. But they should be fought to win instead of by moralizing bystanders. We are 20 years into a losing effort in Afghanistan exactly because of thinking like yours.

Deliberately attacking civilian targets is not “fighting to win”, it’s a WAR CRIME. If you do it you deserve to be EXECUTED, just like at Nuremberg. I wish I could say I can’t believe people here are advocating it, but unfortunately it doesn’t surprise me at all. You are disgusting pieces of filth. Literal nazis.

Please tell me someone called this piece of crap on this

And why did not Trump fire this worthless scum

Any time now the pedophile-in-chief will be flying pallets of cash into Tehran in payment.