Blast comes after repeated Saudi complaints about ship’s suspicious movement along its coast. 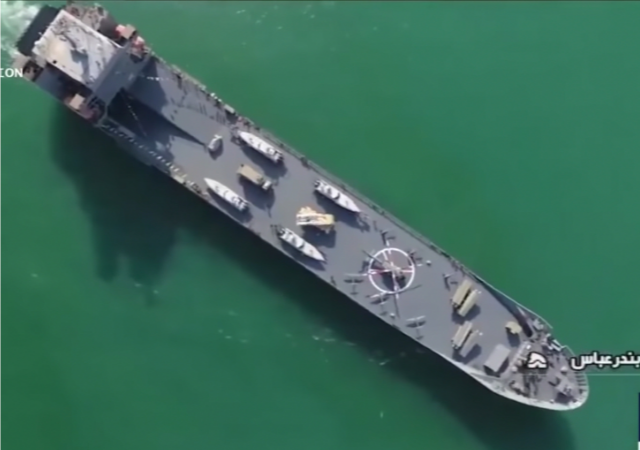 A spy ship linked to Iran’s Islamic Revolutionary Guard Corps (IRGC) suffered an explosion in the Red Sea, the Iranian state media confirmed on Wednesday. The vessel, which was acting as a base for the IRGC, went up in flames as explosive mines hit its hull, the Iranian state-run TV reported.

The ship “most likely functions as an offshore surveillance base, using the vessel’s radar and other systems to monitor traffic and provide intelligence for possible attacks in the important waterway,” British newspaper The Guardian disclosed.

Despite Iran’s ongoing proxy war with Saudi Arabia on Yemeni soil, the IRGC operatives tried to blame Israel for the blast. Several “social media channels operated by members of the Revolutionary Guards blamed Israel for the explosion,” the New York Times noted on Wednesday.

The Associated Press reported the blast on the IRGC ship:

An Iranian ship believed to be a base for the paramilitary Revolutionary Guard and anchored for years in the Red Sea off Yemen has been attacked, Tehran acknowledged Wednesday.

Iran’s Foreign Ministry confirmed the attack on the MV Saviz, suspected to have been carried out by Israel — though Tehran did not immediately blamed its regional archenemy. The assault came as Iran and world powers sat down in Vienna for the first talks about the U.S. potentially rejoining the tattered deal aimed at curbing Iran’s nuclear program, showing events outside the negotiations could derail those efforts.

The ship’s long presence in the region, repeatedly criticized by Saudi Arabia, has come as the West and United Nations experts say Iran has provided arms and support to Yemen’s Houthi rebels in that country’s yearslong war. Iran denies arming the Houthis, though components found in the rebels’ weaponry link back to Tehran.

The IRGC-linked boat had been sailing along the coast of Yemen and Saudi Arabia since 2016. The explosion took place amid repeated Saudis complaints about the presence of the military vessel in the region.

Tehran did not deny the vessel’s military nature but claimed that the IRGC-linked ship had been aiding “anti-piracy” operations in the area. In 2019, President Donald Trump designated the IRGC as a terrorist organization.

The incident took place as Iran steps up a naval terror campaign against Israel. In recent weeks, Iran was reportedly behind attacks on two Israeli-owned cargo ships.

As Iran intensifies its campaign of terror against Israel and other U.S. allies in the Middle East, President Joe Biden is making major concessions in hopes of inducing the Mullah regime to restore the Obama-era nuclear agreement. The Biden White House revoked Trump-era enforcement of international U.N. sanctions and arms embargo placed on the regime. The administration also promised further sanctions relief even before Tehran agreed to restart the nuclear negotiations.

Inclusivity demands that we bring the perspective of the terrorists to the table in order to strengthen our global progress or whatever. We have to accept their demands to find out what’s in them!

Who wants to sit at the same table, why isn’t their ship sitting on the ocean floor?

Maybe Team Biden is on to something. Give them the bomb and they will use it on themselves.

Mossad is too busy snickering to respond to press requests.

Oh, and next time Iran decides to use a ship to release oil and tar off Israel’s coast, Israel should sink the ship without further notice or discussion.

Hit by mines? Maybe if there were some Israeli frog men around. More likely hit by a couple of small torpedoes. Nice little ship you got there Iran. Would be a shame if something happened to it. And it did.

They say it was anchored and hit by mines. They can’t even get their lies straight!

Are we sure?
As mom always said
” Never play with bombs in the house”

“The assault came as Iran and world powers sat down in Vienna for the first talks about the U.S. potentially rejoining the tattered deal aimed at curbing Iran’s nuclear program, showing events outside the negotiations could derail those efforts.”

Since the ship remains afloat I doubt the Israelis had anything to do with it. I agree, it sounds like an inside job.

Iran no doubt set off a small explosion so they could blame the Joooos. And give the ObamaHarrisBiden to get their Jooo hate on and punish Israel for trying to “derail” their negotiations.

Hell, if I heard that ObamaHarrisBiden used Valerie Jarret as a cut-out to coordinate this episode I wouldn’t doubt it.

Whoever did do it did a lousy job as the ship still floats.

It’s all biden’s* fault. Additionally over 100,000 Americans have died of the wuflu under his administration. biden* lied, people died.
Sound familiar?