Surry County Commissioner Van Tucker: “This woke culture that seems to be trying to reform America as we’ve known it is enough.” 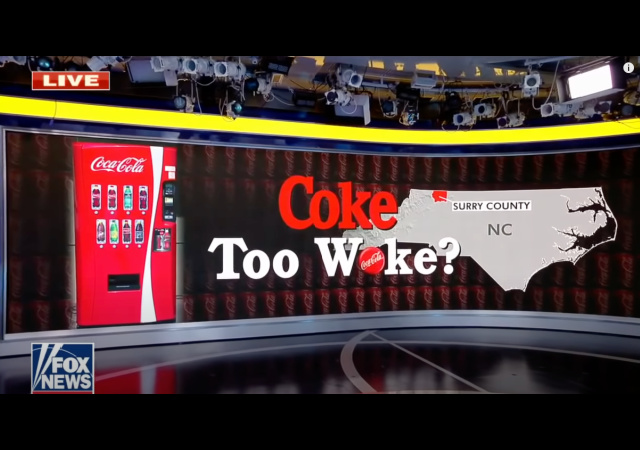 Surry County in North Carolina no longer has Coca-Cola vending machines due to its embrace of “woke culture,” especially the opposition to Georgia’s voting law.

Coca-Cola, which is based in Georgia, has taken a beating in 2021. It first came under fire for its racial quotas on outside counseling. Then it forced employees to become “less white” with online courses.

Third, Coca-Cola’s CEO James Quincey bashed Georgia’s voting law, calling it “a step backwards.” However, Coca-Cola never left Georgia, and the state has not changed anything about the law.

People have not forgotten. From Fox News:

During an appearance on “Fox & Friends First,” Surry County (N.C.) Commissioner Van Tucker said that Coca-Cola CEO James Quincey’s public admonishment of the voting law, which Tucker described as a way for Georgia to ensure a “fair and free” election, pushed him to remove the company’s 12 vending machines from the county premises.

“I didn’t want that [rhetoric] to be contagious across other states,” Tucker said. “And you know I felt so strongly about it and our board did—we decided to just step up and say something and do something about it.”

The county commissioner asserted that although his county was unlikely to be able to reach out to every major corporation “interfering” with the integrity of elections on a state-to-state basis, the Surry County board felt it was important enough to send a message to Coca-Cola.

“This woke culture that seems to be trying to reform America as we’ve known it is enough,” he said.”

Tucker hopes others follow his example because it is the only way to stop corporations from imposing their views on us.

“There is power in numbers and courage can sometimes be courageous,” stressed Tucker.

Not Woke for Coke.

I love it, get the ball rolling for this to happen statewide, Our family no longer buys coke, or any of the extensive brands they peddle.

Divesting our pantry of Coke has been tough, mainly because they have their fingers into everything. My wife has been dutifully avoiding buying Coke products for our drinks fridge, yet I had to remind her this week that Coke makes the Minute Maid she buys for the grandkids.

Yes, it’s like that with a lot of companies. Conglomerates! Makes it darn near unavoidable to fund them in some way whether you know it or not.

Well, I make a point of knowing and switching. We make our own soft drinks. I have a CO2 tank and carbonator. We sweeten with Stevia, which I buy in bulk and also grow. We do both balck and green tea based beverages, using both natural and sometimes artifical flavoring.

It is easy the apolitical store generics are cheaper and taste exactly the same.

But in many cases aren’t those store brands actually manufactured for them by the name brand company they’re supposedly competing against?

Anyway, there are some product categories we’d be better off without, no matter what brands are put on them. Carbonated sugar water being one of the more obvious ones.

True, but the manufacturers often also sell the store brands to said stores at a deep discount, easily made up in Big Logo sales elsewhere.

It doesn’t hurt Big Logo per se, but it ain’t a money tsunami like restaurant, vending machine, and other sales channels.

Put all the coke machines along the Mexican border and you will have a 50 foot hight fence that extends from one end to the other. Plus you could charge a 10 peso fee for everyone who climbs over it and you would be able to pay off the national debt in 3 years.

In fairness though, the Coke bottled in Mexico is the true ‘real thing’. Still made with sugar not the corn syrup BS you find on our grocery shelves.

As for the fee I believe it’s a quarter to cross the America’s bridge in El Paso, or was the last time I checked.

The one true Coke also contains cocaine, not caffeine. 🙂

That was well before my time….

I do wish I had a time machine to take my daughter, who is about to graduate HS, back to the days when McDonald’s fries were made in animal fat, liberally applied salt and accompanied by a real coke w sugar. Just so she could experience it once.

Good news, everybody!
You don’t need a time machine, just a Classic Chevy and a Cities Service map of Vegas!
Heart Attack Grill
They used to be located near me in Chandler AZ, which I visited a couple of times. They moved to Vegas after their 575-lb. TV pitchman died… of a heart attack.
I don’t see any mention of whether they still offer the classic Mexican Coke on their website, but it was a selling point when it was out here. I have to admit, I tried it and couldn’t discern any real difference in taste myself.

So the only way to stop corporations from enforcing their views on us is for the government to remove choices from the people?

If people don’t want to buy Coke, then don’t.

The government shouldn’t be making the choice for the people because people in the government are “offended.”

(And this is true when left leaning governments decide people can’t make decisions for themselves as well.)

It’s very unclear from this poor reportage whether the ban removes all Coke machines from within the county borders, or whether it removes all Coke machines from county government owned buildings, parks, and facilities. The latter is perfectly defensible. The former is much shakier. If, as the speaker says, the citizens support the ban overwhelmingly, you would think that individual shopkeepers and restaurateurs would simply empower themselves to make those changes in their own establishments.

I’m thinking it’s the latter else this story would likely quickly be followed up with one about Coca Cola filing suit against the county.

It is government buildings which isn’t insignificant, it isn’t county borders.

They aren’t entitled to be favored in government buildings.

For those who are saying the ban can be supported if the machines are in the county buildings, the problem with that in every city I have lived in, vending machines are done by contract, and usually after process where the best vendor is chosen based on delineated factors.

It literally is a economic competition,

If some commissioner wants to go against awarded contracts, that’s a problem to me.

I don’t commissioners who get their feelings hurt to make decisions like that. What happens when left leaning commissioners want to ban suppliers that are right leaning? Should we allow that as well?

A government should not control the market that way.

Keep playing by your set of rules and keep losing.

No government anywhere in the USA awards contracts purely by bid, without considering policy. Government contractors everywhere have to certify that they don’t discriminate on the basis of race, sex, and several other things. A government, just like any individual, is entitled to have opinions, and to refuse to do business with companies that do things it doesn’t like.

I’m sure there’s a standard government “morality clause.”
Racism violates that if you want it to.

The proper attack here should not be that Coke is too “woke,” but that Coke is racist. Always frame so-called “anti-racism” as what it is: neo-racism. Nobody will argue with a county for not contracting with a company that is racist. Instead, the debate will immediately move to whether or not Coke is racist, which is exactly where you want it focused. Move the attack away from the county and onto Coke, where it belongs.

For 35 years, I was a loyal customer. As a former journalist, I also interviewed Olympic athletes sponored by Coke in eastern European countries the first time they competed post-USSR and I felt goodwill for this company. The anti-racist leaked slides by employees infuriated me, but the political lecture from the ridicuous British CEO was the nail in the coffin for me. My kids, so sick of Woke teachers & CRT creeing into their schools, were quick to support our household ban on Coke. Hoping to see declining sales for this hateful company.

I’d like to protest the headline, which misrepresents the story. The county hasn’t actually banned Coke machines. If I had a business in the county, and if my addiction to (the profits from) Coke products were stronger than my principles, I’d be free to install or maintain a Coke machine. All the county has done is join the boycott; it does not interfere with anyone’s right to have Coke machines if they want them, but it is refraining from itself doing business with the company. Bravo to it.

Chalk it down to the divine right of bureaucrats, all of whom use the term of their polity interchangeably to represent both their geographical polity, and their governmental corporation, depending on mental context, and often confusing to all.
L’etat, c’est nous.