Are we going to have a “national conversation” about this? Will top military generals offer their insight? 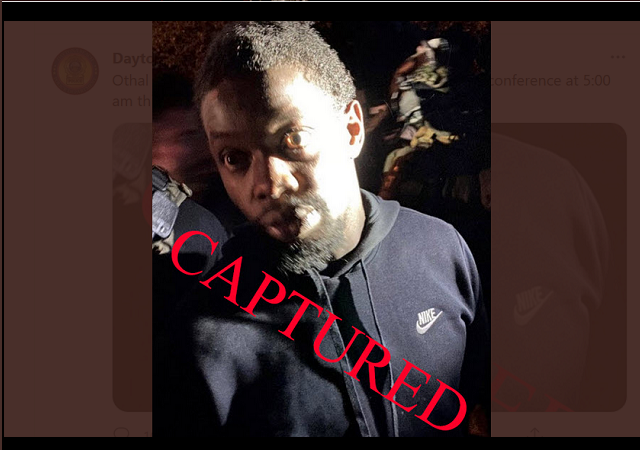 As 26-year-old Daytona Beach police officer Jason Raynor fights for his life after being shot in the head, the suspected shooter Othal Wallace was apprehended at a black nationalist militia camp.  Wallace was reportedly hiding in a tree house on the Georgia property and was taken into custody without incident.

The suspect in the vicious shooting of Police Officer Jason Raynor was apprehended by Georgia police at a black nationalist paramilitary encampment. There is no place for hate in Florida. Our law enforcement will be protected. Justice will be swift. https://t.co/ZUIrCdUgia

Othal Wallace has been captured! There will be a press conference at 5:00 am this morning. pic.twitter.com/jyI6nYI5Ud

JUST IN – this is the tree house where Othal Wallace was arrested this morning. He was booked at 5:15 am into DeKalb County Jail. @fox35orlando pic.twitter.com/Q9NgrMY8dL

A Daytona Beach police officer was shot in the head Wednesday by a man identified by police as Othal Wallace. Wallace was arrested early Saturday in Georgia. Officer Jason Raynor continues his recovery.

The FBI put out a bulletin in the form of a wanted poster for Wallace on Friday night, but by 2:30 a.m. Saturday the suspect, identified by the FBI as Othal Toreyane Resheen Wallace, 29, alias “O-Zone,” was in custody.

Police Chief Jakari Young said at an early Saturday press conference that Wallace was captured while hiding in a tree house in Dekalb County, Georgia, east of Atlanta.

Wallace was found in a remote wooded area with multiple weapons, ammunition and body armor.

Young said Wallace was being held in Georgia on Saturday morning but would be returned to Volusia County, Florida, and held on a charged of attempted first-degree murder of a law enforcement officer.

Young had said said more than 500 officers from various agencies responded to help find Wallace. The reward for information leading to Wallace’s capture was raised Friday to $200,000.

Volusia County Sheriff Mike Chitwood said investigators knew in the early evening Friday that the FBI had found Wallace, but officials had to wait for a federal search warrant to get on the property.

“It was just a matter of when they were going to serve it and what type of force they would be met with when they served it,” Chitwood said. “And thank God no other law enforcement officer and no other citizen was hurt and he will now face the consequences for his action.”

I guess Othal Wallace found out the men and women looking for him were Not F-ing Around. GREAT JOB!!!

EVERYONE please keep the prayers coming for Officer Jason Raynor.

A Gofundme has been set up for Officer Raynor:

Many of you have reached out to us about providing some form of assistance to Officer Jason Raynor and his family during this difficult time.

We want to let you know that a GoFundMe page has just been created for that purpose. The link is below.https://t.co/lpgIBPsd8g pic.twitter.com/AXSG4BvrDf

Wallace reportedly pulled the power cord on Officer Raynor’s bodycam seconds before shooting him in the head.

The Daytona Beach Police released this video of suspect 29-year-old Othal Wallace. Investigators say he shot an officer in the head. The condition of the officer is not known. pic.twitter.com/qKbOOxVRmP

According to the Daytona Beach News-Journal, Wallace has a history of domestic violence reports and was known from his social media posts to be associated with black nationalist militant group the Not F—ing Around Coalition (NFAC).

Young said a search revealed a cache of weaponry thought to belong to Wallace in an apartment near the shooting, including at least three ballistic vests, a rifle, a semi-automatic handgun, multiple high-capacity magazines, and a large quantity of rifle rounds.

Wallace has a criminal record that included domestic battery incidents and one case in which he was accused of wielding a gun to threaten a woman. He has served time in the the Volusia County jail but had not been sent to any Florida State Prison, according to online records.

Volusia County Sheriff Mike Chitwood said Wallace was ready to shoot any cop. He was known to affiliate with a Black militia group known as NFAC.

On an Instagram believed to belong to Wallace, an eerie message was posted June 7: “1 Day I Will Take Great Pride And Honor In Getting Me Some Pigs Blood On My Hands And Boots,” it reads. “I Pray Against My Enemy And Wish Death To All Who Are Oppressive To The Black Culture… Black Power !!”

According to a separate Daytona Beach News-Journal report, the NFAC’s leader has advocated for the killing of police officers and their families on YouTube.

The move, Chitwood said in an interview Saturday, is just one of the tactics taught by the NFAC, the Not F—ing Around Coalition, a Black nationalist militia that has made its presence known at marches across the South starting in 2020.

. . . . NFAC’s leader, meanwhile, has been indicted for pointing an assault-style weapon at several federal officers at a protest in Louisville, Kentucky, on Sept. 4, 2020. According to a criminal complaint, John F. Johnson — aka Grand Master Jay — also took to YouTube to urge NFAC members to attack and kill law enforcement and their families. Johnson urged members to dismantle the body cameras of police they intended to assault.

In an interview with NBC’s Morgan Radford last March, Johnson said the NFAC was growing “by leaps and bounds.” He said its goals are self-defense and to create a Black ethnostate.

“The NFAC was born out of the last four years under the Trump administration. The deterioration of racial relations in this country,” he said. “It means that you are preparing yourself to defend yourself. “

He called violence a “last option,” but added the United States was built on violence as an option.

Are we going to have a “national conversation” about this? Will the top Generals weigh in on this? https://t.co/lHNdhTvAHJ

If this were New York – he’d be out in a few days and ultimately would actually serve 3 to 5. But he was dumb enough to commit the crime in Florida where BLUE LIVES MATTER. So he will likely get LIFE in prison without parole.

Fat Fuck Milley won’t have anything to say about it. The NFAC dipshits infested Louisville and shot 3 people due to a negligent discharge. One idiot had a scope backwards on his rifle.

Perfectly understandable mistake. Rifle inherited from his uncle, who was a suicide.

Her face has an amazing resemblance to a cow, same for her backside. I found her attempts at fashion entertaining, makeup on a cow.

If nothing else, thats woman (?) proved ugly is to the bone. Nothing troweled onto her face could hide it.

Reported because although cows aren’t the most beautiful, their looks and intelligence far outshine the wookie.

Michelle Obama is disgusting, on so many levels, it’s just more efficient to call her ‘ugly’.

Michael is just not adept, despite years of practice (and I expect lots of “professional” help), at dressing well … as Joe says: “You know … that thing … like a gal.”

What has this to do with the topic at gand?

Would have MUCH preferred that the police brought this germ to room temperature, well ventilated.

If he was black they woulda killed him.

Surely general white rage will go full klan hoods now that he knows that there are crimes committed by non whites right right???

Maybe general white rage should get the court martial we all know a soldier would get for saying black rage?

Wait…”black nationalist militant group”… that’s not possible…only white nationalists are dangerous…right? Isn’t that what they’ve been telling us?

Would that make them . . . black supremacists? I didn’t think such a thing existed.

You are confused. Blacks can’t be racist, but they can be supremacists (while still not being racist). Don’t ask anyone how that works. The attempt to answer the question might break the English language.

I wonder if Nike provided free jackets for the club members?

This is obviously a false flag operation in which Mr. Othal Wallace is playing a very clever triple game made to look like a double game.

Don’t laugh: the likes of this dirtbag will soon be your overseer:

And… what was the Federal Bureau of Instigation doing?

Ignoring calls to the tip line in the order they were received.

His tactic of hiding out in the He-Man Woman-Haters’ tree house fooled them all!

I wonder what NIKE thinks about it’s clothing line for China I might add being used by this thug. I guess it’s just another supermist and he AINT white.

Wai’, wha’? We *have* such a thing??? But… but… White supremacy! Greatest threat to the nation!

BTW: NFAC stands for Not Effin’ Around Militia… so… what’s with the C? Spelling error? Commandos? ‘Mandos? Mandon’ts? Mandingos?

His nickname is “O-Zone?!” Guy doesn’t even get an “X” or at least one Muslim sounding name in the middle somewhere? Low-rent revolutionary indeed.

Not even so much as a D’, La prefix, or something spelled fonettuklee.

The apostrophes always crack me up. I also like the unnecessary extra vowels, the prefix in front of
-shawn, and the ending -arius.

The apostrophes stand for letters that don’t exist.

Reminds me of the great black French restaurant… Chez What?

The apostrophes are derivative of Klingon’s Ebonic dialect.
Some of them have to be doubled.

Klingon as a sort of Ebonics. You made me laugh out loud.

Who is the customer, this clown or you and I?