“We just did our jobs as reporters and reported the news. It seems like now just reporting news is a crime,” Daily Caller field reporter Jorge Ventura said about The Intercept’s deceptive hit piece. 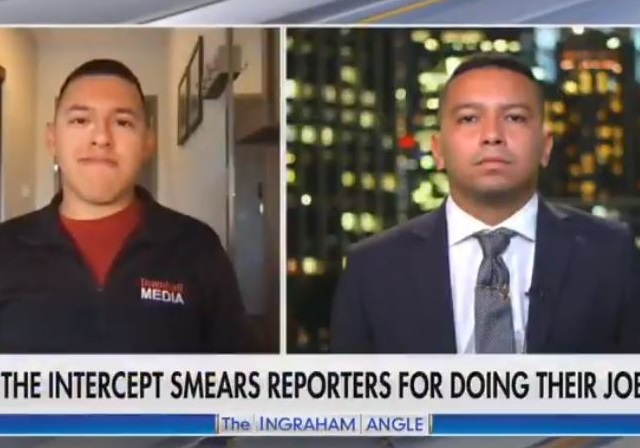 The Intercept website landed itself in hot water earlier this week after running a hit-piece that effectively put dangerous targets on the backs of conservative field reporters who have covered the Antifa/Black Lives Matter-led riots up close and personal over the last year.

“Journalist” Robert Mackey, a senior reporter for the Intercept whose resume includes prior reporting for the New York Times (surprise), and his colleague Travis Mannon proudly promoted the link numerous times on their respective Twitter feeds and retweeted the scant praise they received from supporters like has-been comedian Tom Arnold.

But it was Mackey’s tweets that got ratioed big time as other media figures on both sides of the aisle and their Twitter followers blasted The Intercept for further endangering the lives of these on-the-ground reporters over the “crime” of often reporting on the side of these “peaceful protests” that the mainstream media doesn’t want you to see.

Here’s a short clip from the video below. For those who want to watch the full 25-minute version, I encourage you to click here rather than giving The Intercept’s website any extra clicks:

In the piece, field/riot reporters for Daily Caller, Townhall.com, and The Blaze as well as some independent reporters were criticized for having the audacity to show the bad side of the Antifa/BLM protests. Some of them were accused of deceptive editing, which is chutzpah on steroids coming from a report that in and of itself was deceptive, as we’ll soon dive into.

Popular progressive journalist Glenn Greenwald, who co-founded the Intercept in 2014 but who resigned in October 2020 alleging editorial censorship over stories critical of then-Democratic presidential nominee Joe Biden, ripped Mackey, Mannon, and others at The Intercept a new one for the direction they were taking the website:

The Intercept is now actively targeting two journalists of color. They have two white male reporters here putting a target on their backs for the crime of reporting on Antifa riots. This is genuinely disgusting and dangerous. Press freedom groups should condemn this. Watch: https://t.co/Mgqm4oGW8m

This is on top of what The Intercept has @micahflee doing: trolling through private personal data for Gab users to dox them, as @mtaibbi reported. Do you see who their targets are? Private citizens with the wrong ideology. That’s FBI work, not journalism.https://t.co/eKK8cAxQ60

Journalists have been repeatedly assaulted while covering Antifa protests. Antifa threatens journalists, breaks their cameras, and attacks them violently. The Intercept knows this. They’re showing Antifa which 2 journalists they should look out for. That’s what this is for.

The most hilarious part of this disgusting Intercept video trying to put targets on the backs of reporters who cover Antifa protests is that @RobertMackey tried to depict himself as some battle-hardened reporter because he “live-blogged” the Arab Spring from his couch. 😂 pic.twitter.com/DkqnEZUaaU

Post Millennial editor-at-large Andy Ngo, who has been assaulted by Antifa rioters and who has repeatedly been threatened with further retaliation by the violent group, also criticized The Intercept:

As someone who nearly died as a result of being beaten on the head for my video coverage of riots, I cannot overstate how much more you’re endangering these reporters in your hit piece. @spj_tweets & @pressfreedom need to condemn this anti-press freedom propaganda.

Andrew Sullivan, another progressive journalist who left a left-wing publication over disagreements over the editorial direction, also called The Intercept’s piece an attack on journalism:

Townhall and Daily Caller both ran pieces standing by the work of their reporters.

Some of the reporters have done interviews with Fox News as well in the aftermath of The Intercept’s smear attempt:

"We just did our jobs as reporters and reported the news. It seems like now just reporting news is a crime." @townhallcom reporter @julio_rosas11 and Daily Caller reporter @venturareport went on Fox News to defend their reporting against The Intercept's hit piece pic.twitter.com/q0h0SC3Y8E

"I don’t expect everybody to agree with what they see, but it’s video." @shelbytalcott and @richiemcginniss went on Fox News to discuss being smeared by The Intercept pic.twitter.com/lD4lIo3yzo

As to what’s deceptive about The Intercept’s report, there’s too much to document in this post, but for starters, Daily Caller chief video director Richie McGinniss wrote a lengthy Twitter thread dissecting and debunking what they alleged about him, including the suggestion that he committed a felony by allegedly deleting footage central to the Kyle Rittenhouse case:

In this piece, @RobertMackey (who I spoke to for over an hour) describes my professional background but *fails to include the fact that I worked at NBC News for LONGER than LevinTV, even though I told him this and the info is available for all to see on my LinkedIn: https://t.co/wzTXkm603J pic.twitter.com/weghZE2wlt

The "speculation" that he links to is an absurd theory floated by a self-described satirist with 75 followers pic.twitter.com/6igU1UmL0g

@RobertMackey also implied that we were viewed by Proud Boys as an ally, despite the fact that I told him I was targeted by PB's in both DC and Portland as a result of @ShelbyTalcott and I filming PB's violent assault of an individual outside the CHAZ in Seattle pic.twitter.com/ZbWp5lfwMF

I let our team’s reporting speak for itself. We have always striven to document the *complete picture of these protest zones, sometimes at great risk to our safety.

If @RobertMackey wants to follow up this garbage pile he’s trying to pass as journalism, I’m happy to talk (again) pic.twitter.com/7lTdatGf5e

Reporter takes shirt off his back to try to save a dying BLM protester and The Intercept baselessly accuses him of covering up a murder. Bang up job https://t.co/RBdy7enurl

Rosas also defended his own reporting as well and noted that The Intercept left out the fact that he, too, hasn’t just reported “one side,” further imploding the narrative of deliberate deception on the part of the conservative reporters covering the protests:

Here is a simple truth: BLM/Antifa supporters and activists rioted in American cities for much of last year. I just happened to be one of the few who were willing to document it. I also noted when BLM supporters tried to stop rioters: https://t.co/r90H0nh61Y

The video goes to great length to claim I only focus on when people are rioting or fighting. Yes, I tweeted videos of such moments, but I have noted in my coverage when things are peaceful, like here in Kenosha: https://t.co/FdeMzGhmvA

I honestly think a case can be made that these “Riot Squad” reporters on the right have presented a far more balanced picture of what’s happening at these riots than the mainstream media has, based on what I’ve seen of the videos they’ve taken and the reports filed (full disclosure: I also write for Townhall sister site RedState). They’re certainly far more balanced than most of what you’ll see at The Intercept – especially from Mackey, who blocked Prof. Jacobson several years ago after he questioned Mackey’s Gaza war reporting.

.@RobertMackey is a complete joke, not surprised he's bashing reporters who actually do reporting https://t.co/2Gnevw8IAX

Unfortunately, the mission of The Intercept’s report has already been accomplished:

Here’s an Antifa member explicitly saying they’re going to watch for the two journalists highlighted by the Intercept. That’s the whole point of that Intercept video: to incite violence against these journalists by encouraging Antifa to attack them.https://t.co/NLH6jf7vo8

Absolutely disgusting. And most definitely not “journalism” in any way, shape, form, or fashion.

This brings cleary into focus the motto the left lives by: “What’s good for the goose does not apply to the gander.”

Using tactics designed to intimidate through the use of violence or threat of violence ….that seems to ring a bell…if only there was a legal definition for these tactics….

Robert Mackey is also a commited Israel hater.
He thinks he knows what is going on in Israel because he has visited a few times.
Apparently Mackey also spent time in Pakistan which he thoroughly enjoyed.
Total 🤡

I believe Julio Rosas will have a bright future..I watched his reporting from the riots… and had a brief exchange with him on twitter.. Nice guy.. Good reporter..

I hate to see him targeted but I hope it backfires, and provides him some well deserved publicity.

The refusal of the msm to report on the extent of the rioting and violence of the protests last summer and insistence on advancing the narrative of police violence against black males is distorting the perceptions of many average Americans. These reporters have been a corrective to the downplaying of this violence but the MSM is just as responsible as the Intercept for creating a false narrative that “Antifa” does not exist. The MSM reporters themselves are either brainwashed in only seeing what they want to see or intentionally deceptive in covering up the truth. They should call these rioters what they are–anarchists. Antifa has the connotation of being against fascism but they believe our country is “fascist” and want to destroy everything. They have no alternative other than destruction. If the media reported on them, there would be no tolerance for them to continue.

As Viva Frei says, “confession through projection”. How much exculpatory footage surrounding Kyle Rittenhouse did the progressive media destroy?

I was not a fan of Greenwald but after listening to a long interview with him and going back to the Intercept which I used to read I have changed my mind. I don’t agree with his left stances on issues but he is one of the few reporters that actually report the truth. The Intercept is garbage and I don’t read it anymore.