Hamas launched an intensive mortar attack as 24 trucks were attempting to deliver supplies through the Kerem Shalom crossing. 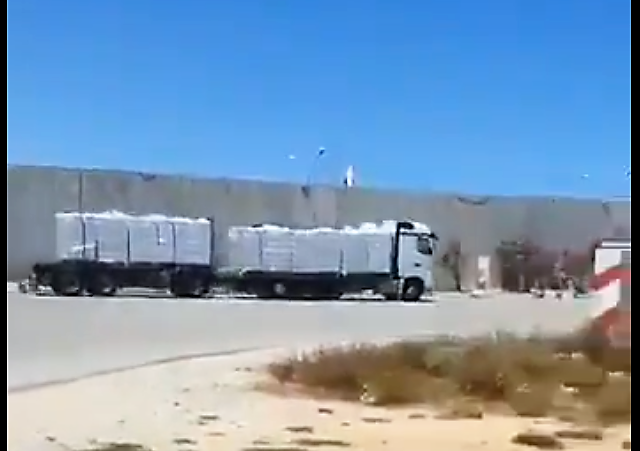 What just happened at the Kerem Shalom Crossing leading from Israel into Gaza is a pretty good metaphor for the entire psychopathic Hamas and Palestinian terror group pathology.

Kerem Shalom is the main crossing terminal through which commercial trucks and supplies reach Gaza. The crossing had been closed due to the rocket fire from Gaza, but yesterday Israel agreed to reopen the crossing to allow a convoy of 24 trucks to enter Gaza with humanitarian supplies.

So what did Hamas do? It launched a mortar attack on the crossing as the trucks were entering Gaza, wounding an Israeli soldier:

The Israel Defense Forces says the person injured in the mortar attack was an IDF soldier assisting in the transfer of humanitarian aid shipments into the Gaza Strip through the Erez Crossing.

The soldier sustained light injuries and has been taken to Ashkelon’s Barzilai Medical Center for further care, medics say.

Earlier today, Israel temporarily reopened both the Erez and Kerem Shalom crossings into Gaza, allowing many truckloads of fuel, medical equipment and animal feed into the enclave, according to Israel’s military liaison to the Palestinians.

While the crossings were opened, terrorists in the Strip launched a large mortar barrage across the border, including at Kerem Shalom and Erez.

Kerem Shalom is the crossing through which humanitarian aid enters Gaza from Israel.

As the trucks were unloading their cargo, Hamas fired rockets at the crossing.

That's all you need to know. pic.twitter.com/8FAGR8C24L

They also attacked the other main terminal, the Erez Crossing (which I visited in 2015):

A number of trucks carrying medical equipment, animal feed & fuel tanks for the Gaza Strip had been on their way through the Kerem Shalom crossing when the mortar barrage started. Mortars were fired both towards that crossing and the Erez crossing.

This is not the first time Palestinians have tried to destroy the terminal, it happened in 2018 also during the so-called Great March of Return border attacks. We covered the story and damage at the time, indlucing the deliberate destruction of a gas pipeline supplying Gaza.

The crossing will remain closed until the damages caused by the riots are repaired & will reopen in accordance with a situation assessment. Hamas terror organization is harming the wellbeing of Gazans

Ron Coleman said that Avi Mayer is a must follow on twitter. I knew about this horrific incident from him.. I didn’t hear anything on the news. What a surprise.

It’s within range. They take what they can get. They don’t want Israelis being nice, they want them being dead.

Time to nuke the Gaza Strip from orbit. It’s the only way to be sure.

Time to hire the Chinese to build a Great Wall.

Cut off all power, water and “humanitarian supplies” to Gaza. This is an existential war.

Don’t understand why Israeli authorities bother. Just shutdown all border crossings and then bomb the Hamas terrorists back into the stone age.

Just bomb them. They already live in the stone age. And are useful idiots for Iran.

They deserve to live in the stone age, cooking with camal crap, hungry, thirsty, wiping with their hand and cleaning their hand with sand.

As it stands, they are useless and a wellfare state,

Because doing that would cost Israel their international support, without which they would be vulnerable to annihilation themselves from the multiple close neighbours that don’t like them even without them enacting a genocide.

And Iran, the source of most of this BS.

Trust me, my friend

Bites the hand that feeds them. Maybe we should stop feeding them.

And then cut off their nose to spite their face for good measure.

Same for our inner cities. allowing generation after generation to reproduce at public expense has not turned out well.

Most of their offspring end up in jails, again at our expense.

But the media love the police and Israel … as scapegoats.

A prime example of all consuming hatred trumping (no pun intended) brains.

My memory is dreadful these days, but I think Professor Kontorovich has worked with Legal Insurrection in the past.

Big tech weighs in and the result will not surprise you at all.

Just as BLM doesn’t care about black lives, Hamas doesn’t care about the lives of the “Palestinians” it claims to represent. They are pawns, useful only so long as dupes in the West are willing to believe that harm to them is Israel’s doing. That is why Hamas (and the PLO before them) has never allowed them to disperse into the general population of neighboring countries, even though they’ve been “refugees” so many decades that nearly all the “refugees” who ever lived in Israel are dead of old age.

The parallel goes farther. Both Hamas and BLM exist to destroy civilization and replace it with barbarism. Neither should be treated as anything but enemies to shoot back at when they attack.