Not the narrative of the anti-Israel “human rights” groups and media. 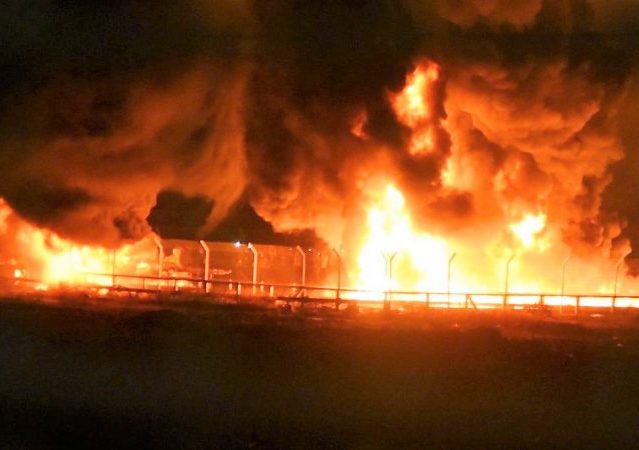 The Great March of Return, touted by so-called “human rights” groups and western media as “peaceful protests,” continued its weekly assault on the Gaza-Israel border fence.

As we have documented many times, these are violent and dangerous military operations under cover of civilian protests. The vast majority of people killed at or near the fence have been Hamas and other terror group members.

The environmental crimes by burning thousands of tires have polluted the air and ground. And in the latest tactic, using kites with attached incendiary devices to set fire to Israeli fields and forests: 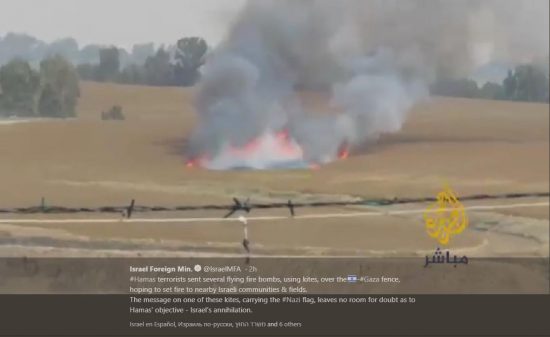 There also has been a concerted effort to destroy the Kerem Shalom crossing, into which most humanitarian aid to Gaza flows, as well as the gas pipeline at that crossing that supplies fuel to Gaza. We reported on that self-destructive development last week, “Peaceful Palestinian protesters” set fire to gas pipeline supplying fuel to Gaza.

It happened again today. The crowd, urged on by Hamas leadership, threw hurled pipe bombs, rocks, and grenades, sabotaged security infrastructure, and burned tires. They also destroyed the Palestinian side of the crossing and another fire set to the gas line:

Earlier today, dozens of rioters vandalized & ignited fires on the Palestinian side of the Kerem Shalom humanitarian crossing in Gaza. The rioters damaged gas pipelines that run from Israel to Gaza & benefit the Gaza’s residents pic.twitter.com/W1AY8dIPOU

Hamas leadership was present, but of course, out of harm’s way:

As always, the cameras are there for the staged “heroic” shots:

Israel has closed the crossing until further notice:

Due to the destruction of the Kerem Shalom Crossing on the Palestinian side, the Minister of Defense, Mr. Avigdor Liberman, approved the recommendation to close the crossing pic.twitter.com/R81Y5QieLv

The crossing will remain closed until the damages caused by the riots are repaired & will reopen in accordance with a situation assessment. Hamas terror organization is harming the wellbeing of Gazans

Military and administrative officials toured the Israeli side of the Kerem Shalom goods crossing with the Gaza Strip Saturday, a day after Palestinian rioters torched gas pipes serving the territory as well as a conveyor belt used to transfer goods into the Strip.

The damage to the crossing is thought to be in the tens of millions of shekels.

On unnamed official told the Ynet news site, “We were astonished by the devastation and destruction Palestinians left in their wake. They’re bringing a disaster upon themselves.”

Expose them. Shine that light nice and bright.

Those are “unarmed Palestinians”. I have been told so by the enlightened and woke, it must be true.

Coming to a theater near you this summer: Baltimore, Chicago, Philly, Nola,STL, LA.
People need room to destroy. Enjoy.

Gaza must be the sh!thole Trump talked about back in January…

Palestine is just as bad as African shit-holes.

you would think that the Balistinkians would realize that Israel will not be rebuilding the gas pipelines nor the destroyed gateway for trucks to bring aid.

but they are too dumb.

They are running out of children. Hezbollah is reportedly handicapped by bad PR – the same families are sending their boys as recruits and getting tired of always being the ones who sacrifice their boys.

I guess Hamas decided they no longer need the gas now that they’ve burned all the tires.

Add the Gazans to the long list of rioters who never learned not to s*** where they eat.

It seems the Palestinian approach is to:
>
1. Claim how their homeland was stolen from them even though none of them has any earlier generations who lived there;
>
2. Claim how unfair it is that the Palestinians poor;
>
3. Set fires to tires and such polluting their air and then demand help for those who are living there and having breathing difficulties;
>
4. Set fire to the natural gas pipeline and then demand more energy supplies because they have too little for their needs;
>
5. Destroy the major crossing through which most food and humanitarian aid comes and then tell the world how badly they are being treated/suffering;
>
6. Attack the border fence with everything they can find while threatening Israel with their destruction and then complain to the international community when they get shot by Israeli defense forces;
>
7. Run to the UN to proclaim how thy, the Palestinians, are being persecuted, are poor, have nothing, are being killed by the Israelis, and, therefore, demand sanctions against Israel for their bad behavior as well as enhanced support/humanitarian aid for the Palestinian people for they are victims;
>
8. The world then runs around in circle with their hair on fire in a panic over the plight of the poor innocent Palestinians.
>
9. Lather, rinse, repeat.

Perhaps the Israelis could add some napalm to their bonfires?

Peaceful protestors with pipe bombs? polluting the air they too have to breathe? These aren’t just violent protestors – they are incredibly stupid protestors.

But not to worry, the left and the MSM will make this all Israels fault. As they always do.

Anti-Semitism is alive and well and living in the USA, especially on college campuses and in the media and the Jews who support the left must, for the most part be fine with that. ⁉️

“they are incredibly stupid protestors.”

Due to both genes and culture.

“they are incredibly stupid protestors.”

Due to both genes and culture.

“The Gaza leader of the Hamas terror group on Wednesday said that a mass protest on the Israeli border next week will be “decisive,”

I’m reminded of when Churchill toured the Maginot Line and was assured that French soldiers were “matchless” .

Yes Hamas, I agree that next week’s riot will be “decisive”