“It’s absolutely wrong what happened to them. They were not involved in this incident at all” 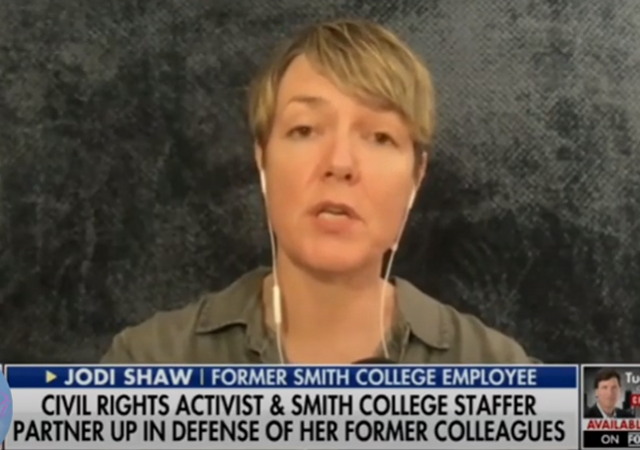 We have devoted extensive coverage to the race incident at Smith College in Massachusetts which turned out to be a hoax, and to Jodi Shaw who ultimately resigned from Smith as a result.

In the course of the hoax, a janitor and a cafeteria worker were falsely smeared as racists. Jodi Shaw is now trying to help them out through fundraising.

Tucker asked Jodi why she is doing this. She responded, “Because it’s wrong. It’s absolutely wrong what happened to them. They were not involved in this incident at all, and by the way the custodian who actually did call campus police was also not in the wrong. And you know, my version of social justice is people using their privilege, in my case I was privileged to be a graduate of Smith College. When I see wrong, I want to do something to help.”

The cafeteria worker spoke out about the incident recently.

The cafeteria worker at Smith College who was hit with a false allegation of racism has filed an internal complaint against the school, saying her life has ‘not been the same since.’

Jackie Blair, a longtime cafeteria employee at the elite liberal arts women’s college in Northampton, Massachusetts, spoke out in an online fundraising appeal to cover her legal and medical expenses.

‘In the summer of 2018 I was falsely accused of racism by a black student on her Facebook page and my life has not been the same since,’ she said…

‘I work as dining service staff at Smith College. I also happen to be white, which should not be relevant, but Smith College has made clear it is,’ Blair wrote on her fundraising page.

If you want to donate to the funds Jodi mentioned on Tucker’s show, click here.

The custodian has also set up a GoFundMe here.

ITS NOT AN ISOLATED INCIDENT

She should be more active in alerting her liberal friends about the HOAX that is Critical Race Theory and is infecting all of academia and most of society.

She makes it seem like its all just about this one incident and a few individuals at Smith College. It’s equivalent to fighting a Covid-19 infection with a band-aid.

She must stand-up and call bullshit on the whole Neo-Racist agenda (which advocates for racism against certain races that the mob has deemed guilty of acts committed 10 generations ago by people who may – or may not – have been their ancestors.)

She has. Look at the videos she made on You Tube.

Check out jodishaw.net and you can see the many ways she is working for change. Stop in the action tab first.

Allegations of diversity (i.e. color judgment), not limited to racism, require extraordinary proof, and the claimants should face equal justice if they fail to present their case. That said, social justice anywhere is injustice everywhere. !HateLovesAbortion

Wait for it: 3, 2, 1 — “Campaign deleted because it violates GoFundMe’s community standards.”

Related to the point I was about to make, which is that because of GoFundMe’s abhorrent history of progressive bias, I no longer send money to any funds hosted there. If she would like to open up a fund on GiveSendGo, I might be persuaded.

Are all current with the content of Yuri Bezmenov and his words in his two YouTube videos?
He predicted all of this in 1984.