The 43-year-old Iranian national appears to have fled the country. 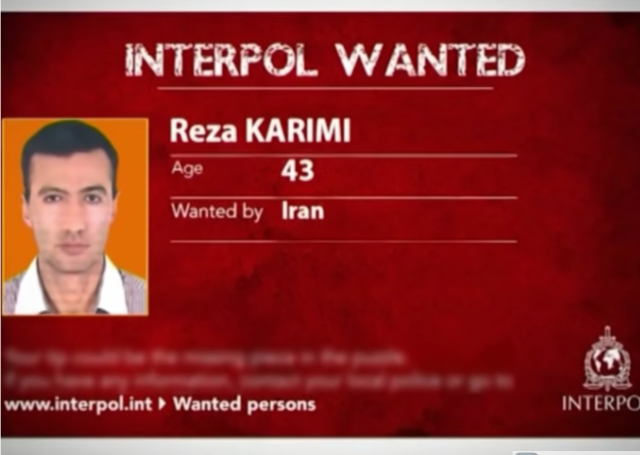 Iran has named a suspect in the last week’s attack on Natanz facility connected regime’s nuclear weapons program. The heavily-guarded underground site in Natanz was being used to produce enriched uranium, the key component in making a nuclear bomb.

The 43-year-old suspect, Reza Karimi, has fled the country, the Iranian state TV is reporting.

Iranian state TV media showed an International “red notice” issued in the name of the suspect. Some foreign news outlets cast doubt on the validity of this international warrant which requires the approval of the Lyon, France-based international police organization, Interpol.

Iranian regime sources did not disclose how the suspect got access to country’s most secure uranium enrichment site and derailed their rogue nuclear weapons program.

The Reuters reported the Iranian manhunt:

Iran on Saturday named a man it wants arrested in connection with a recent explosion and power outage at its main Natanz nuclear plant, as talks got underway in Vienna to try to save Tehran’s 2015 nuclear deal with world powers.

“Reza Karimi, the perpetrator of this sabotage… has been identified” by Iran’s intelligence ministry, state TV said. It said the suspect had fled Iran before last Sunday’s blast that the Islamic Republic has blamed on arch-foe Israel.

Officials from the remaining parties to Iran’s nuclear deal began a formal meeting in Vienna, suggesting that this round of talks which began on Thursday was wrapping up.

The television showed what it said was a photograph of the suspected perpetrator on a red card that had “Interpol Wanted” written on it. The card listed his age as 43.

“Necessary steps are underway for his arrest and return to the country through legal channels,” the report added.

It is unclear if Reza Karimi is in any way related to Ershad Karimi, the man accused of involvement in the last year’s explosion at the same site. The July 2020 blast also destroyed advanced Iranian nuclear centrifuges in Natanz, the target of last week’s attack. Ershad, who also appears to have escaped Tehran’s clutches, owned a company which supplied high-end equipment to the notorious nuclear facility.

Iranian regime officials have been quick to accuse Israel, but had so far been silent over any domestic involvement in the breach at one of their best-guarded nuclear weapons facilities. Iranian Foreign Minister Mohammad Javad Zarif, who is currently holding mediated talks with the Biden White House to restore the Obama-era nuclear deal, vowed to “take revenge on the Zionists.”

As I noted in my post on Monday, the “breach in Iran’s most secure nuclear site could not have been possible without the active involvement of courageous Iranian nationals.”

If the Iranian media reports bear any credence, men like Reza Karimi are playing a heroic part in preventing their regime from getting its hands on nuclear arsenal.

Brave Iranians like him have more moral fortitude than the combined cohorts of historically-challenged Western leaders, who lined up this week to “condemn” the derailment of Iran’s nuclear weapons program.

Some eighty years after Neville Chamberlain returned from Munich, European leaders, including Germany’s Angela Merkel, are appeasing Iran at the Vienna Summit, a regime that enslaves its own people and vows to destroy Israel, the home of the Jewish people.

Thank you! The pleasure and privilege of writing for LI readers is all mine.

“Some eighty years after Neville Chamberlain returned from Munich . . . ”

Those who learned from history are doomed to watch those who didn’t.

That man is a hero, Allegedly.

Too bad the guy’s name wasn’t Reza Badiyi. That would have explained absolutely everything.

I think this guy in the photo was my Uber driver last night.

Who would you be more comfortable with having a nuclear weapon? South Korea or North Korea?

Besides, Israel can’t even use it on their enemies because they are too close geographically. It’s a deterrent only in the hands of the most stable country in the region.

It is unclear if Reza Karimi is in any way related to Ershad Karimi, the man accused of involvement in the last year’s explosion at the same site.
Are the Karimi brothers the “usual suspects”? Are they the generic ‘Iranian’ whose picture they can show to make the populace look all around and wonder if that’s their neighbor or not? How many brothers are there?