Jerusalem Post: “Based on reports, it seems that the so-called accident was caused by a cyber attack.” 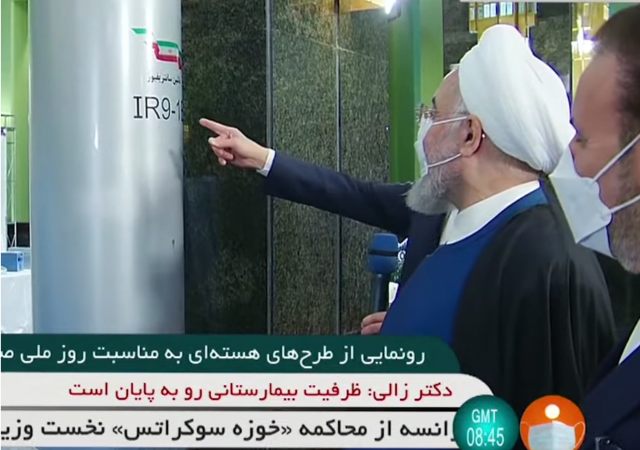 A day after Iran launched advanced centrifuges at Natanz nuclear facility, the site had been struck by an electrical “accident,” Iranian state media says. The electrical grid at the nuclear site crashed a day after the new centrifuges were plugged in, an Iranian spokesman claimed.

There are indications of an Iranian cover up of the incident considering that regime officials and state-run media did not reveal further details or the extent of the “accident.”

Israeli media also contradicted the official Iranian account. “The incident at Natanz on Sunday morning was not an “accident” and the damage is much graver than what Iran is presenting to the public, the Jerusalem Post disclosed.

The incident may have been caused by yet another cyber attack at one of Iran’s “most secure” nuclear sites site. “Based on reports, it seems that the so-called accident was caused by a cyber attack,” the newspaper added. Around 2010, the site was hit by malware that destroyed centrifuges and dealt a major blow to Iran’s nuclear ambitions.

Tehran has often pinned the blame on Israel and the United States for breakdowns and incidents at its nuclear sites. In July 2020, Natanz nuclear enrichment facility suffered an explosion and fire, triggering further allegations from Tehran.

The Associated Press reported the indecent at Natanz nuclear site:

Iran’s Natanz nuclear site suffered a problem Sunday involving its electrical distribution grid just hours after starting up new advanced centrifuges that more quickly enrich uranium, state TV reported. It was the latest incident to strike one of Tehran’s most secure sites amid negotiations over the tattered atomic accord with world powers.

“Here the power has been cut off indeed, and we do not know the reason for the outage,” he said. “The incident is under investigation and we will inform you about the reason as we find out.”

The word state television used in its reports attributed to Kamalvandi in Farsi also can be used for “accident.”

The Vienna-based International Atomic Energy Agency, which monitors Iran’s program, said it was “aware of the media reports,” but declined to comment.

The commissioning of the new and advanced centrifuges was a major nuclear breach as Iran began mediated talks earlier this weeks with the Biden administration in Vienna, Austria.

The talks began after President Joe Biden made major concessions to the regime, revoking the enforcement of the U.N. sanctions and international weapons embargo, reversing former President Donald Trump’s decision.

As the week-long talks wounded down in Vienna, the Biden White House reportedly offered to end all sanctions imposed under President Trump’s watch on the Shia-Islamic regime. “The Biden administration has opened the door to lifting Trump-imposed sanctions against Iran that are “inconsistent” with the 2015 nuclear deal, and also those that prevent Iran from accessing broader economic benefits under the agreement, according to a senior State Department official.” the Washington Post reported on Friday.

The Biden administration’s proposal is nothing short of the heralding a full-fledged return of the Obama-era appeasement policy towards Iran, the world’s biggest state-sponsor of jihad and international terrorism.

UPDATE: According to news reports, Iranian regime has changed the initial “electrical accident” narrative and is calling the incident an act of “terrorism.” Iran’s “nuclear chief, “Ali Akbar Salehi, said that the international community and the International Atomic Energy Agency (IAEA) needed to deal with what he called nuclear terrorism,” the Jerusalem Post reported.

Iran is now casting blame on Israel for disrupting its uranium enrichment program which aims to being the regime closer to building a nuclear bomb.

Biden and Kerry are sad.

Biden and Kerry should hang.

So is most of the civilized world.

…because they completed a much-needed, ops job…

I imagine Biden and Kerry would prefer Iran just declare they are fully nuclear and end the slow walk charade the Dems have to play along with. A good way to end a crisis is to let it conclude without having to actually do something.

The most likely cause is that Iranian infrastructure is run by suck-ups who are woefully incompetent at anything other than sucking up to the higher ups and this actually was an accident.

I’ll bet Mossad has a very good idea of exactly what happened.

Iran may be way ahead of Israel in terms of money, population, land, and fawning UN functionaries. But Israel is way ahead of Iran in smarts. That’s the only way such a tiny country has been able to survive in the midst of several dictatorships constantly declaring war against Israel.

Israel knows that one nuke could wipe them out. Iran has stated for many years that its goal is to eliminate Israel. So keeping Iran from getting a nuke is an existential necessity for the Israelis. I believe they will go to any lengths to prevent that from happening.

Technologically speaking, the Iranians are children, and the communists of the world, led by the communists occupying the seat of our government are hell-bent on giving them nuclear weapons in order to eliminate Israel from the world stage.

Considering that the Iranian nuclear enrichment sites have been hit by malware before, you’d have to wonder if this is not the result of some clever malware but simple incompetence?

I’m more inclined to posit clever incompetence. The Iranian people are not as crazy as their government.

“Ali Akbar Salehi, said that the international community and the International Atomic Energy Agency (IAEA) needed to deal with what he called nuclear terrorism,”

If you take out a molotov-wielder before he can throw it, is that arson?

If you prevent the creation of a nuclear WMD, is that nuclear terrorism?

“If you prevent the creation of a nuclear WMD, is that nuclear terrorism?”

I dunno. Let me go ask Professor Jennifer Ho at the University of Colorado, Boulder and I’ll circle back to you.

This is the second time they lost their new centrifuges. The other time was several years ago when the USA and Israel conspired with a new type of computer malware.

Iran and its centrifuges are like “Star Wars” and the death star; the same thing keeps repeating.

I hope the centrifuges were ruined from the abrupt loss of electric.