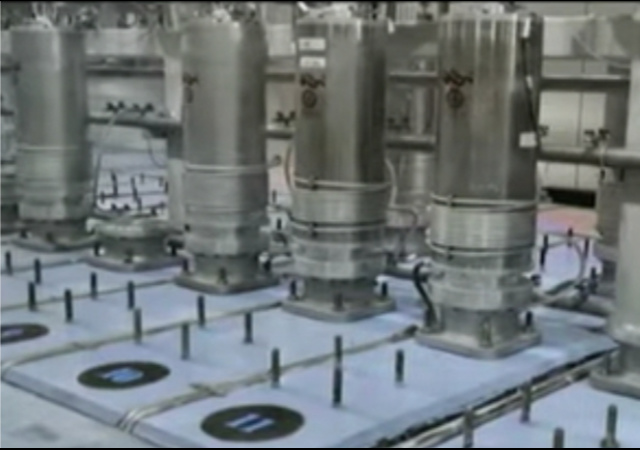 The new generation of nuclear centrifuges was unveiled amid great fanfare by Iranian President Hassan Rouhani in a televised ceremony on Saturday, marking the regime-choreographed “national nuclear day.”

The centrifuges were meant to boost enriched uranium production, a key component of any nuclear arsenal.

The planned propaganda coup turned into a monumental embarrassment for Tehran when an “electrical accident” took out the nuclear centrifuges less than a day after the highly publicized inauguration.

The Sunday disaster is a massive setback to Tehran as it holds mediated nuclear talks with President Joe Biden’s administration in Vienna, Austria.

The Associated Press reported the extent of damage done to the newly-unveiled centrifuges:

[Iranian Foreign Ministry spokesman] Khatibzadeh acknowledged that IR-1 centrifuges, the first-generation workhorse of Iran’s uranium enrichment, had been damaged in the attack, but did not elaborate. State television has yet to show images from the facility. However, the facility seemed to be in such disarray that, following the attack, a prominent nuclear spokesman Behrouz Kamalvandi walking above ground at the site fell 7 meters (23 feet) through an open ventilation shaft covered by aluminum debris, breaking both his legs and hurting his head.

The NYT on Monday reported:

Two intelligence officials briefed on the damage said it had been caused by a large explosion that completely destroyed the independent — and heavily protected — internal power system that supplies the underground centrifuges that enrich uranium.

The officials, who spoke on the condition of anonymity to describe a classified Israeli operation, said that the explosion had dealt a severe blow to Iran’s ability to enrich uranium and that it could take at least nine months to restore Natanz’s production.

The mainstream media has begun speculating Israel’s role in the attack. Many news outlets cited Israeli public radio Kan claims, which portrayed the incident in Natanz as a cyberattack carried out by the intelligence agency Mossad. A cyberattack in 2010 caused massive damage to centrifuges in Natanz nuclear site.

“There are indications that the disruptions in Natanz were the result of a cyberattack, and, as always, all eyes are on Israel when these things happen,” The Jerusalem Post noted.

While the derailing of Iran’s uranium production in Natanz might well have been another daring Mossad operation, Sunday’s breach in Iran’s most secure nuclear site could not have been possible without the active involvement of courageous Iranian nationals on the ground — an embarrassing fact for Tehran to admit.

The Israeli government did not confirm its involvement. Officials generally refrain from commenting on Israel’s covert and anti-terrorist operations.

Intelligence sources tell me: Israel is behind the activity in Natanz. This is an Israeli cyber operation in which the Mossad was involved. The damage to the Natanz facility is greater than reported in Iran

Despite covering up facts surrounding the incident, the Iranian regime points its fingers at Israel.

Iran on Monday accused arch-foe Israel of sabotaging its key Natanz nuclear site and vowed revenge for an attack that appeared to be latest episode in a long-running covert war. (…)

On Monday, Foreign Minister Mohammad Javad Zarif explicitly blamed Israel. “The Zionists want to take revenge because of our progress in the way to lift sanctions… We will not fall into their trap…We will not allow this act of sabotage to affect the nuclear talks,” Zarif was quoted by state TV as saying.

“But we will take our revenge against the Zionists.”

Who is truly protecting the American interest – Netanyahu's Israel or the Biden administration? | "[T]he explosion had dealt a severe blow to Iran’s ability to enrich uranium and that it could take at least nine months to restore Natanz’s production." | https://t.co/OVwCGjhqhY

The European Union was among the first to “condemned” the attack on Iran’s nuclear weapons infrastructure. “We reject any attempts to undermine or weaken diplomatic efforts on the nuclear agreement,” EU spokesman Peter Stano said on Monday, admitting that “we still need to clarify the facts” connected to the incident.

The EU is currently mediating nuclear talks between the Biden administration and Iran at a summit in Austria to restore the Obama-era deal.

I think the Juices understand they can’t trly on Democrats…and most of the rest of the Middle East understands this too.

I would assume they are using the gaseous phase of uranium hexafluoride to accomplish the enrichment in their centrifuges. And that’s about as nasty a material as you’ll ever come about.

So if there were physical breeches in the centrifuges and/or equipment feeding the centrifuges and the UF6 escaped the Iranian government has a hell of a problem on their hands that they need to deal with before re-starting uranium enrichment at the site.

As Jerry Seinfeld used to say “That’s a shame”. lol

(Seriously, message to Iran: small bombs on your territory beats the hell out of large ones. Get the message?)

The problem is going to be Communist Chinese troops who will be soon be stationed on Iranian soil, acting as a trip-wire for war against any attackers, much like the capacity US soliders act in in South Korea.

Communist China, with its 1.6 billion population, has an UNLIMITED amount of soldiers at the ready. They’ll soon seed their fascist selves throughout the Earth. Apparently, they already own a controlling stake in America.

With our soldiers soon to be wearing dresses and maternity gowns (giving us thousands of more treasonou loons like Bradley Manning), China will soon be Earth’s ruler. Their concentration camps come at no extra charge.

How do you say “oops” in Hebrew?

אופס (though it’s supposed to go over there —>)

Last, have drones looking for and terminating rag head Mullahs.

Iran’s ass should have been kicked right after their revolution.

In public, they virtue signal and blame Israel. In private, they know Israel keeps us safer and does what they have no backbone to do.

From the article: “The European Union was among the first to “condemned” the attack on Iran’s nuclear weapons infrastructure. “We reject any attempts to undermine or weaken diplomatic efforts on the nuclear agreement,” EU spokesman Peter Stano said on Monday…”

Wow. The EU’s official position is that this *strengthens* Iran’s position in the negotiations?

The peeU think the alligator will eat them last.