BBC: The attack “damaged an unknown number of centrifuges”… “stopped work at the facility for now.” 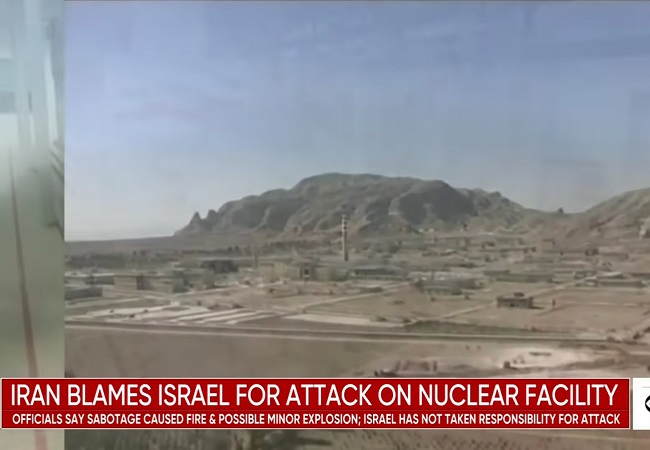 Following the breach on the weekend, Iran’s most secure nuclear weapons facility has reportedly been knocked out of operation. “The attacked damaged an unknown number of centrifuges – sophisticated machines that make uranium usable for nuclear purposes – and has stopped work at the facility for now,” the BBC confirmed on Wednesday.

The revelations come as Iran sits on the negotiating table with President Joe Biden’s administration with hopes of restoring the Obama-era nuclear agreement.

The Times of Israel on Tuesday reported the Iranian admission:

A senior Iranian official confirmed Tuesday that the blast at the Natanz nuclear facility, which Tehran blames on Israel, destroyed or damaged thousands of centrifuges used to enrich uranium.

Alireza Zakani, the hard-line head of the Iranian parliament’s research center, referred to “several thousand centrifuges damaged and destroyed” in a state TV interview. However, no other official has offered that figure and no images of the aftermath have been released.

The remarks appear to confirm Israeli reports indicating the damage was widespread and Iran will have significant difficulty restoring its enrichment to previous levels in the coming months.

The damage to rogue nuclear weapons infrastructure has weakened Iran’s bargaining position at the European Union mediated talks in Vienna, Austria. Iran has repeatedly used the threat of boosting its uranium enrichment to force the Biden White to state negotiations and lift Trump-era sanctions.

Iran will begin enriching uranium up to 60% purity after an attack on its Natanz nuclear facility, a negotiator said Tuesday, pushing its program to higher levels than ever before though still remaining short of weapons-grade.

Already earlier in the day, Iran’s foreign minister had warned that the weekend assault at Natanz could hurt ongoing negotiations over its tattered atomic deal with world powers. Those talks are aimed at finding a way for the United States to re-enter the agreement, the goal of which is to limit Iran’s uranium enrichment in exchange for relief on sanctions.

Nuclear negotiator Abbas Araghchi, in Vienna to begin informal talks Tuesday night, made a point to make his announcement in English.

“We believe this round of negotiations is the time for the U.S. to present a list and I hope that I can go back to Tehran with the list of sanctions which should be lifted,” Araghchi told Iranian state television’s English-language arm Press TV. “Otherwise, it would be a waste of time.”

He said authorities would add another 1,000 “more-advanced” centrifuges to Natanz as well.

While the Iranian regime accuses Israel of attacking the site and derailing its nuclear weapons program, Jerusalem has yet to comment on it officially. Israel generally does not comment on its covert and anti-terrorism operations.

While the Jewish State is left alone to face renewed threats coming from Tehran, the Biden administration and Europeans are clearly siding with the Shia-Islamic regime, the world’s biggest state sponsor of terrorism.

The Biden White House, keen to appease Iran, has been quick to distance itself from the attack. “The United States had no involvement,” White House spokesperson Jen Psaki told reporters.

The European Union “condemned” the attack on the Shia-Islamic regime’s nuclear weapons infrastructure. “We reject any attempts to undermine or weaken diplomatic efforts on the nuclear agreement,” EU spokesman Peter Stano declared on Monday.

Britain, France, and Germany joined the EU in condemnation. “In light of recent developments, we reject all escalatory measures by any actor,” the European powers said in a joint statement on Tuesday.

The Biden White House and Europeans are in good company. China used the same rhetoric to decry the Natanz incident. “China strongly condemns the sabotage on the Natanz nuclear facility in Iran,” Foreign Ministry Spokesperson Zhao Lijian said on Wednesday.

Beijing is betting big on President Biden restoring the nuclear deal and ending all Trump-era sanctions. China just signed a 400 billion trade and investment agreement with Iran, which it can only fully milk if U.S. sanctions are lifted.

Israel, seeing the environmental damage, helped Iran to reduce their energy dependance, save transportation needs, and help the world environment.

Speaking of environmental damage, destroying centrifuges spinning out enriched uranium has got to have spread uranium dust across the site.

Good news in my book.

The Israelis have proven that they have excellent intelligence inside Iran, and can hit what they want to when they need to.

Several thousand centrifuges got to be expensive. All hopefully trashed. Serves the evil regime right.

The only real world ally that Israel had, was a Trump led US. Now that Biden’s in charge, Israel understands that they’re on their own and are acting accordingly.

Good on them. A Nuclear armed Iran would be existential crisis for Israel. They absolutely should do everything within their power, up to and including a pre-emptive nuclear strike, to prevent that from happening.

Better to be a world pariah than to be a large smoking hole in the ground.