“The South grew 10.2%, more than twice the rate of the Northeast or the Midwest. U.S. growth fell from 9.7% in the previous decade.” 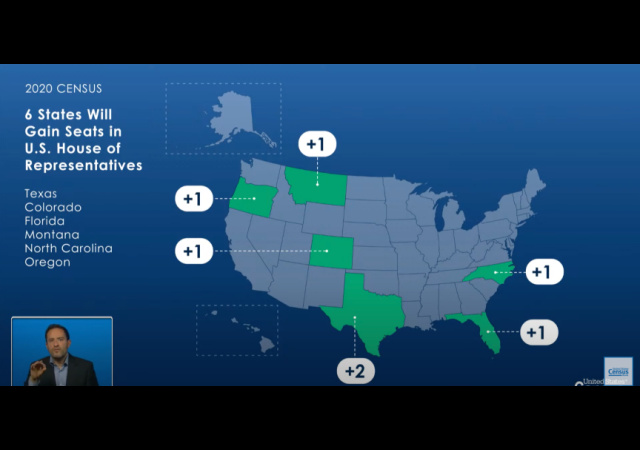 The 2020 Census data confirm what we have known for a long time: A lot of people fled and continue to flee oppressive blue states like California, Illinois, and New York to freedom-loving states like Texas and Florida.

It is the first time California lost a seat since it became a state in 1850.

States that lost a seat:

States that gained a seat:

Democrats have the House majority, 218-212. The number does not include the five vacancies.

The shift in the Census could slim the Democratic majority even more or help the Republicans take over. However, the full data for redistricting will not come out until the end of September.

Brookings Institution demographer William Frey said, “politically, many of these Electoral College-seat gaining states may be trending ‘bluer’ politically because of the movement into them from Democratic-leaning states.”

Key word: bluer. Frey did not say the moves will turn Texas or Montana blue, but it should not surprise anyone if the states have more Democratic votes in presidential elections.

New York lost its House seat by only 89 people.

The electoral shifts reflect the decade’s broad population shifts: slow growth in the Northeast and Midwest and gains in the South and Mountain West. The South grew 10.2%, more than twice the rate of the Northeast or the Midwest. U.S. growth fell from 9.7% in the previous decade and was the slowest since a gain of 7.3% in the 1930s, during the Great Depression.

“New York lost its House seat by only 89 people.”

NY nursing homes have their revenge.

Heck, if AOC hadn’t ruined the prospects for Amazon in NYC the resulting jobs could potentially have offset those numbers.

Dems will apparently never be able to understand that “unintended consequences” thing.

Slayed by the jawbone of an ass. How appropriate would it be if the surrendered seat was her district!?!

I hope they disinfect the seats from CA.

Not everything about this is a gain for the GOP. That Cal. seat moves to Oregon, where it will likely be Democrat. Meanwhile, the gerrymandering in Cal. will undoubtedly result in the loss of one Republican district.

Not to mention that the migration has been of “blue bloods”(liberals) leaving their costly blue states to infect red states with their political ideologies and votes.

I wish this were better news.

For that matter, the same logic should apply to every lost seat – the left will try to gerrymander to ensure that every lost seat is a Republican, so at best it will end up a wash, at worst the Dems might actually gain one or even two.

West Virginia only had three house seats, all republican. they’ll have to pick one up somewhere else to offset that.

I imagine the push to make DC and Puerto Rico states now will grow even louder.

And the push to let 16-years olds vote will grow louder.

Let’s not forget the felons getting to vote from prison either!!

States that lost a seat:

So when does CA, NY, and MI along with the rest file a federal lawsuit in the District of Hawaii challenging the results of the Census and their loss of seats in the House of Representatives. Because you know . . . Trump did it!!!!

Sorry, they don’t have standing. Or maybe it’s latches. Anyway, it’s complicated, and I doubt the Supremes will pick it up before next year or two when it will come around on the agenda and by then it’s too late to appeal and too bad. Sorry. Not.

In the immortal words of Nelson Muntz, “Ha ha!”

…but with an “Awwwwww” for West Virginia

A lot of fleeing ca residents are heading to Or and Wa.

Wa probably would gain, but it has people fleeing too. I don’t seen Texas going as blue as people might think as the lefty bigots will choose woke places like Seattle.

New York lost its House seat by only 89 people.

I am proud to be one of those 89 people. I deliberately ignored the census, hoping for this result. I knew it was very unlikely that my one “vote” would tip the balance, and indeed it didn’t, but I knew it could be close, so I cast my “vote” by not returning the form. I want NY to have less representation, and I want my neighborhood in particular to have less representation.

I considered doing the same but I’m in Virginia and our area is still not as lost as NoVA.

I did the same thing in IL. I don’t want this shithole state to have any more influence in DC then necessary. Was hoping to lose 2.

I’m at a loss to understand how anyone could vote Democrat. Have we really become this stupid?

It isn’t as much stupidity as venality. They’re being paid via the welfare/wealth transfer system, and see themselves as voting for their own self-interest.

“I’ll have those n*****s voting democrat for 200 years.” LBJ was right and now we as a nation are paying the price.

California, Illinois, Michigan, New York, and Pennsylvania voted for President Joe Biden.
————————–
Well the final tally was biden* won. The real tally may yet be uncovered if they actually do an audit of the votes.
Antrim County is going to get some of the Arizona folks stopping by to do an audit. Liberals are *ahem* upset about that.
What do they have to fear? Stay tuned for another loss of our “democracy” from that dude rachael something or other on pmsnbc.