Illinois Lost More Residents in the 2010s Than Any Other State

Illinois Lost More Residents in the 2010s Than Any Other State 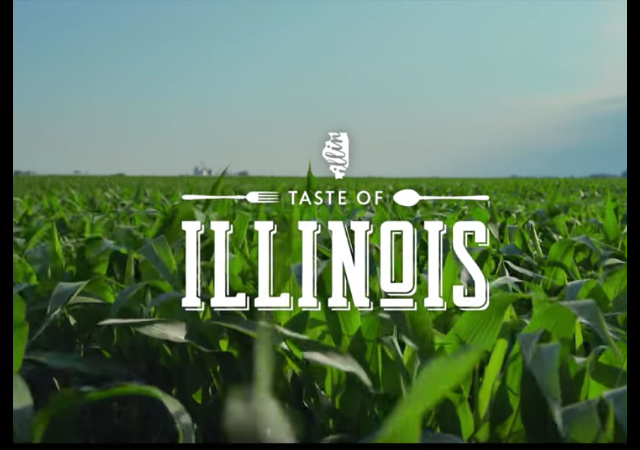 The state also lost more residents in the 2010s than any other state. Thing is, the decline really only began in 2014.

Illinois’ population decreased in 2019 by an estimated 51,250 people, or 0.4%, marking the sixth consecutive year the state has lost residents, according to new data from the U.S. Census Bureau.

Since the turn of the decade, Illinois has lost more residents than any other state, with a drop of about 159,700 people, or 1.2% of its population. Only three other states have shrunk since 2010: Connecticut, Vermont and West Virginia — with West Virginia losing the largest share of its residents, a 3.3% decline. 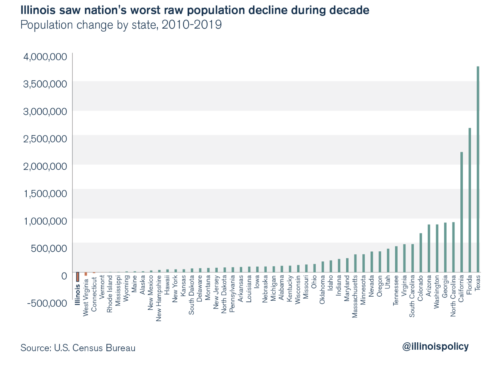 Democratic Gov. J.B. Pritzker attempted to spin the loss in his favor:

“Illinois’ unemployment rate is at a historic low and we are continuing to create jobs in every region of the state,” the statement said. “Illinois is back and the Pritzker administration is proving that when you build relationships, work together and focus on solutions you can create positive change.”

Taxes remain the main reason why people leave the state or will not move back. This could have an enormous impact on those who decide to stay or have no choice but to stay in Illinois:

Population decline, and more specifically the decline in the prime working-age labor force, has serious negative implications for the state’s economy and the growth in state tax revenue needed to pay for current liabilities. As the population shrinks, so too does the potential tax base. Unfortunately, many of Illinois’ costs, such as pension liabilities, are fixed costs that exist independently of population trends, meaning that despite fewer taxpayers, the size of many liabilities won’t shrink.

If Illinois had kept pace with average state population growth since the start of the Great Recession, it would generate $3.45 billion more in state tax revenue annually.

Despite taxing almost everything possible, Illinois has more debt than ever before. The state passed a “temporary” income tax hike in 2011, but the debt still grew because the government cannot stop spending.

Illinois may lose even more residents if Pritzker’s so-called “fair tax” this year.

Illinois has eighteen representatives in the U.S. House, but a decrease in the population could lower the number.

Illinois will change its ways when the handlers of goverbnment money in Illinois say so, leftist politics be damned.

California without the good weather.

A lot of snowbirds in Illinois with condos or 2nd homes in the south. It is very easy for them to change their legal residence to Arizona or Texas or Florida since thye are already there at least half the year.
Seems like the only people moving to Illinois are people wanting to take advantage of the crime sanctuary status of Chicago or who seem to think that Chicago is btter than California cities, Seattle or Portland.
Jussie-land.

I am sure most LI readers are familiar with the Curley Effect, but just in case I will recap. The Curley Effect is when political leadership of a town/state/country increases “the relative size of [their] political base through distortionary, wealth-reducing policies”.

I guess they are hoping to get high quality pop growth by legalizing weed.

Thanks for this one Mary. Count me and the misses among the 2014 crowd.

Moved from Illinois to Texas 2 years ago. Best decision I’ve ever made.

If I could, I would gladly send them 200K from my State. In fact, I will make it 250K, and add a prohibition of any CA or NY residents from moving in. Oh…and those creeps and criminals from IL.

What is bad about these states that are so ultra-liberal that they are chasing out so many of their population is that they settle in conservative states, and bring their failed politics with them, turning the state more purple. Fortunately not all who move are leftists, but far too many of them are because that is the majority of the make up of those states.
It’s tough that they do this while not recognizing that the problems with the state they leave are due to their politics. At what point do these people wake up to see its killing the nation and the states they infect?
NY, California, Illinois are all losing population, but its hurting Florida, the Carolinas, Texas…

Fled the People’s Republic of Illinois in 1979. Goodbye to high taxes and gun laws that disarm everyone except the criminals. And it only gets worse from there.

Oh Hell. The rats keep jumping ship and spreading their liberal plague, raising the cost of our homes, crowding our cities and towns, sucking up resources and ruining the environments that they claim to care so much about…generally making a mess of things.

Does Illinois have a chance? Three of the last 4 Governors are felons, can honest citizens live with this level of corruption? Didn’t think so.

My career took me away from the family farm many years ago but I always planned to return in retirement. Not now, which means Illinois loses the taxes on the money I saved for retirement. I’m also planning on selling the farm and doing an exchange for a farm in a different, more rational, state. Illinois is going to have to get much much worse before it gets better.

One thing we all must fear over war and that is an all Demorat government with the WH and Congress in their hands. They WILL pass and enact a bill to bail out all of the big Blue states and their underwater pension plans. Guess who will be the ones paying? The money required to do that will make war look like a bargain.

What a shit hole. The entire state is dominated by corrupt Chicago politicians. The people in that shit hole actually pride themselves on having the most corrupt political machine in the country. Let the whole thing crater and go bankrupt, and the federal government sure as hell better not “bail them out” with my money.

I left Illinois in the 1971, the day after graduating high school.

Illinois is a loathsome place by any standard one can imagine–its weather is awful, its government corrupt through and through at every level, its taxes exorbitant and tubby–that is, its bilionaire governor Pritzer who earned his wealth by the arduous task of leaving his mother’s womb –wants to increase them even more. Anybody who would remain here who is not compelled to is an idiot

I live in Illinois and can’t wait to get out. What has crippled this state are the unions — public, municipal, state. A significant number of people retire with pensions that are six figures, and pay no state taxes. Then they find another job and double-dip. When the legislature tried to renegotiate contracts and rein in the pensions, the IL Supreme Court found in favor or the unions. The state is as corrupt as they come. And now Pritzker wants a Connecticut style progressive income tax. Right. Force more people to leave. Illinois is on its way to bankruptcy. What once was a somewhat prosperous state under Thompson and Edgar is now a shell of itself.