Gallup: Americans Still Overwhelmingly Support Israel, But Some Increase In Sympathy For Palestinians

Gallup: Americans Still Overwhelmingly Support Israel, But Some Increase In Sympathy For Palestinians

It will be interesting to see if the massive disinformation campaign against Israel on campuses finally does serious damage to the general American population view of the conflict. There has been some slippage, but it might be too early to tell if it’s a long-term trend outside of liberal Democrats.

Every year we track Gallup’s polling on American preferences in the Israel-Palestinian conflict. Similar polling questions have been asked for over two decades, so it allows us to see trends. Since 9/11 American’s overwhelmingly have supported Israel and chosen Israel when asked to choose one or the other.

Here are prior years:

The Gallup survey recently released contains simlar gaps, though there is an indication of increasing sympathy towards Palestinians, Americans Still Favor Israel While Warming to Palestinians:

Gallup’s annual update of Americans’ views on the Palestinian-Israeli conflict shows Israel remains well-liked in the U.S. At the same time, Americans’ favorable views of the Palestinian Authority are at a new high of 30%, as is the percentage sympathizing more with the Palestinians than the Israelis (25%).

Similarly, Americans continue to be more inclined to want the U.S. to pressure the Palestinians than the Israelis to resolve the Mideast conflict. But support for emphasizing pressure on Israel is also at a new high of 34%, with a majority of Democrats taking this position for the first time….

U.S. public support for an independent Palestinian state continues to register just above the majority level, with 52% holding this view today, similar to support during the prior two years. While the extent of that support has varied since 2000, the percentage in favor has consistently exceeded the percentage opposed…

Where is the increased sympathy for Palestinians and desire to pressure Israel coming from. The obvious answer to anyone who has watched the increased radicalization of the Democrat Party from the Squad and other Israeli-haters, is that support for Israel is shifting almost exclusively in among Democrats. And that is what Gallup finds:

Most of the increase since 2018 in wanting the U.S. to emphasize pressure on Israel comes from Democrats, the majority of whom now take this position. The 53% opting for more pressure on the Israelis is up from 43% in 2018 and no more than 38% in the decade before that, marking a substantive change in Democrats’ perspective on U.S. policy. 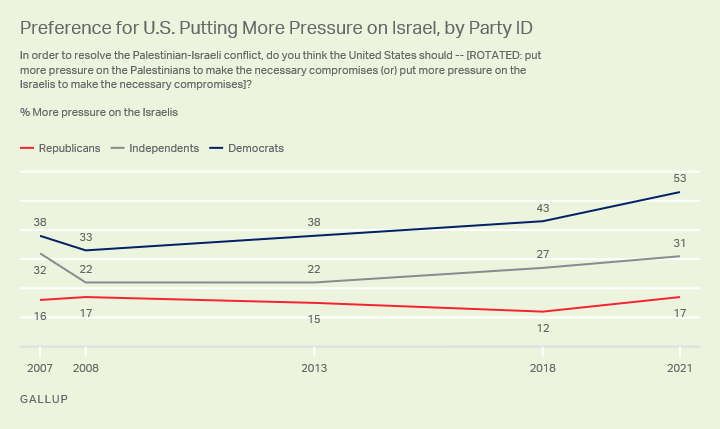 As Gallup noted in 2019, the only demographic that does not clearly favor Israel are liberal Democrats.

Meanwhile, there has been no change over the past year in Americans’ general stance on the Israeli-Palestinian conflict, with the majority still sympathizing more with the Israelis (58%) than the Palestinians (25%).

However, because of incremental shifts over the past several years, the percentage favoring the Palestinians is at a high point in the trend since 2001. Sympathy for Israel remains about average, while the percentage volunteering that they sympathize with both sides equally or neither side (or that they have no opinion) has dwindled to 17%, from 33% in 2001. 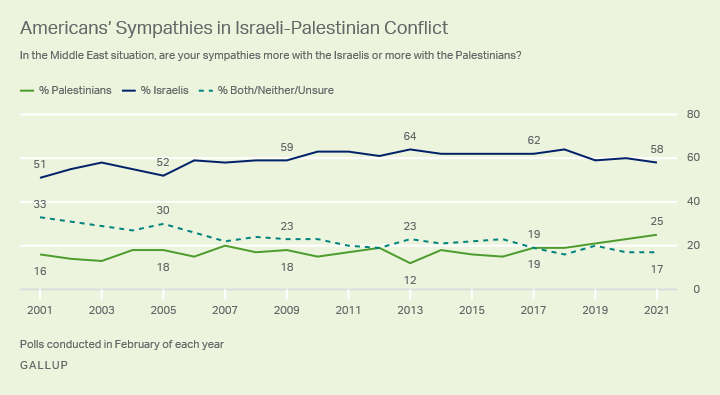 I think it’s easy to forget that Israel was not always as popular as it is now. As recently as the 1990s it ranks substantially lower: 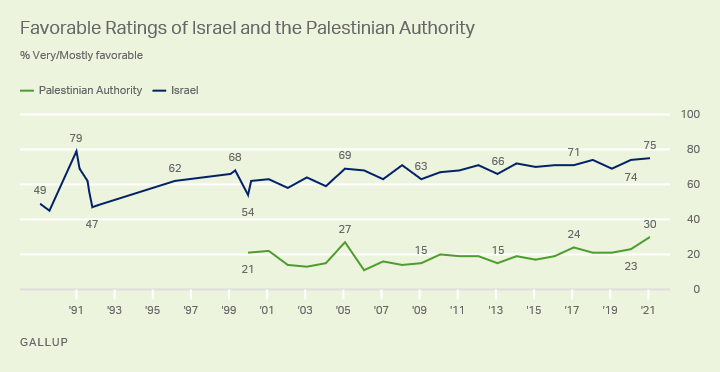 You can read the full Gallup dataset here.

It will be interesting to see if the massive disinformation campaign against Israel on campuses finally does serious damage to the general American population view of the conflict. There has been some slippage, but it might be too early to tell if it’s a long-term trend outside of liberal Democrats.

The leaders, not the people. The leaders forced a progressive condition from the war on Jews, the coup in the “second state”, and “F” the people over a multidecadal period and on a forward-looking basis.

They are Arabs, nothing more and nothing less. The Turks despised them.

Not a good idea, helping them produce smarter offspring would be a wast of better gentic material and counter productive.

If this is a poll I don’t believe it

The only demographic that doesn’t clearly favour the liberal democracy are liberal Democrats. We have to stop calling these Democrats liberal, they’re far from it.

The Democrats have been galvanized by Trump’s success in the region, and they remain married to the failed notion that Mideast peace depends entirely on solving the “Palestinian” issue.

They would rather see Israel vaporized than let Trump have any credit for peace in the Middle East.

For Israel’s sake, I would rather not see those Arab squatters vaporized, though the y do deserve it. But I would be OK with fuel-air bombs.

I am not impressed with Arabs in general, but those squatting in Palestine really are the dredges of humanity. Other Arabs, collectively have no use those in Palestine.

“Gallup noted in 2019, the only demographic group that does nt clearly favor Israel is liberal democrats.”

Jews have to rethink their politics. The Democratic party has radically changed. Not just with respect to Israeli policy. In a wide range of policy areas it promotes principles that most would find problematic – if they take a few moments to really think about it. Problem is that many are misled by leaders who have married the Democratic Party and are never going to change.