“What stands out from this polling, which has been taking place for decades, is the consistency of support for Israel by almost a 3-1 margin, no matter who is President or which political party is in control in the U.S.”

Every year for the past several years we have reported on the Gallup polling on the Israel-Palestinian conflict. What that polling shows is a consistent and long-term American support for Israel when given the binary choice of supporting Israel or Palestinians.

Normally Gallup publishes its findings in March, but for whatever the reason, the 2020 polling was released on April 22, 2020, as part of a Gallup news release regarding increasing support for an independent Palestinian state.

By 60% to 23%, Americans continue to sympathize more with the Israelis than the Palestinians in the Middle East situation. While not a statistically significant change from last year’s 21%, the 23% favoring the Palestinians today is the highest recorded in Gallup’s World Affairs survey trends since 2001.

Gallup’s Mideast sympathies trend documents important changes in Americans’ reactions toward the Palestinian-Israeli dispute; however, the precise percentage sympathizing more with Israel can vary, depending on survey context. Recent Gallup research found that the standard question order used on Gallup’s annual World Affairs Survey, where this question follows the favorable ratings of countries, produces a higher percentage of Americans — 11 percentage points higher in 2019 — sympathizing with Israel than when the question is asked on surveys where it does not follow the favorability question. 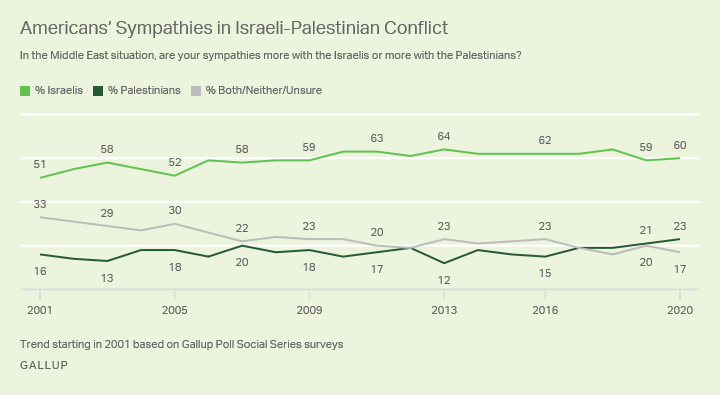 Meanwhile, Israel’s favorable rating in the same poll is near its historical high in Gallup trends. The 30% holding a very favorable view of the country is one point shy of the record 31% recorded in 2018, and the combined 74% very or mostly favorable views is exceeded only by the 79% recorded in January 1991, shortly after Iraqi Scud missiles struck Israel during the Gulf War. 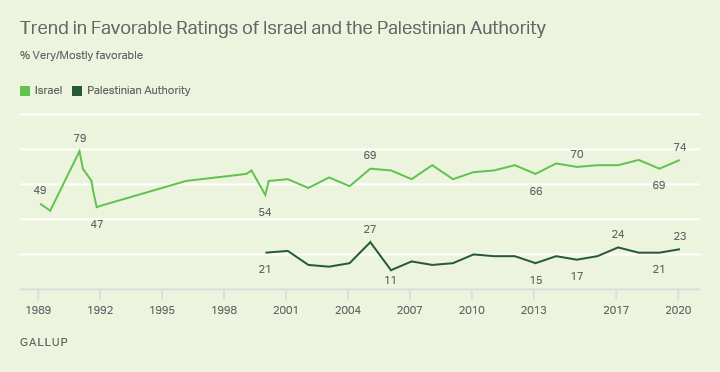 As in prior years, Republicans are more favorable to Israel than Democrats, but even Democrats sympathize more with Israel than Palestinians.

Republicans’ and Democrats’ current attitudes toward Israel and the Palestinian Authority are typical of the pattern seen over the past two decades.

The two partisan groups hold substantively different views on the question of an independent Palestinian state. The majority of Democrats (70%) favor the establishment of such a state, while more Republicans oppose (48%) than support it (44%). 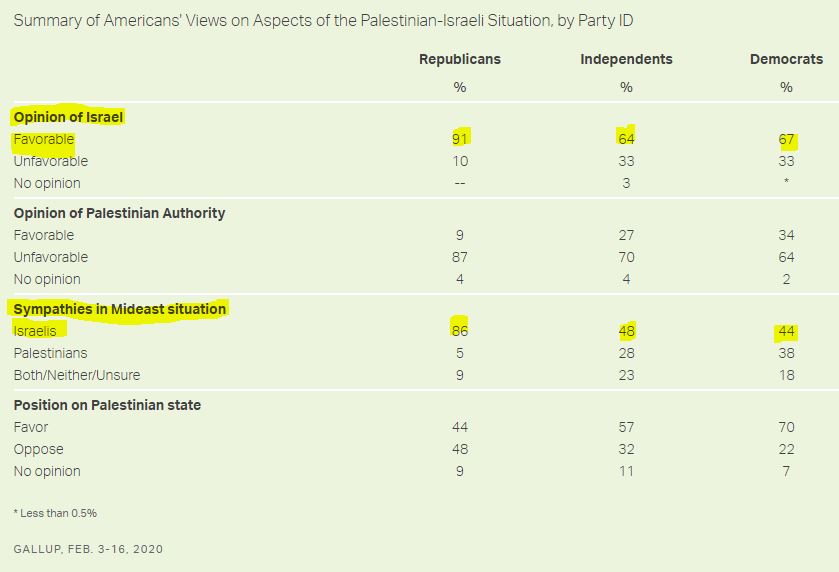 What stands out from this polling, which has been taking place for decades, is the consistency of support for Israel by almost a 3-1 margin, no matter who is President or which political party is in control in the U.S. As I’ve said many times, despite massive attempts to demonize the so-called “Israel Lobby” and to delegitimize Israel, politicians in the U.S. support Israel because the American people support Israe. The American people are the “Israel Lobby.”

notamemberofanyorganizedpolicital in reply to Exiliado. | May 1, 2020 at 3:01 pm

Pray for the peace of Jerusalem: they that love thee shall prosper. Peace be within thy walls, and prosperity within thy palaces. For my brethren and companions’ sakes, I will say now, peace be within thee. For the sake of the House of the Lord our God I will seek thy good.
– Psalm 122

Muslim behavior, as dictated by their “holy” (cough) book, helps shape this opinion.

Israel is a very real place and has been since Biblical times. Palestine on the other hand was and still is nothing but an area. To proclaim that I am a Palestinian is no different than saying I am a mid-westerner. Neither are any specific place on any map that can be pointed to.

Not a tough race for Israel to win, given Islamists are so shit-tier. It does appear Islamophiles are having some effect in that Unsures are breaking to Palastine to a small degree in recent years.

Of course they do. Americans are force fed a never ending stream of pro Israel propaganda. We are forced to ship billions in welfare to Israel every year, with no benefit to the American people. Bring our troops home, end all aid to every Middle Eastern nation and let Israel sleep in the bed it has made. Nothing in the Middle East is worth one drop of American blood or one penny of American tax money.
Israel could disappear off the face of the Earth tomorrow and the American people would be better off.

First get Israel back the territory that it gave Egypt at Jimmy Carter’s demand, in return for financial assistance to partially compensate for the loss of that territory and resources.

Then revisit the first Gulf War, which Israel stayed out of and let the Iraqi missiles fall, in return for a US promise of loan guarantees to settle a million immigrants from Russia in Judea and Samaria, which would have solved the “Palestinian” problem, and then the US reneged on that promise. So resettle all those people where they should have been put in the first place.

Then stop all US aid to Israel’s rivals, so it doesn’t have to keep playing catch-up just to stay safe.

After you do all that, by all means stop US aid. It’s not worth the price Israel has paid for it.

But bear in mind that most of the “aid” is either in the form of loan guarantees that cost the US nothing, or is actually aid to the US arms industry, since it has to be spent there. Also bear in mind the huge return the US gets on its investment in Israel, in many fields including military cooperation.

Finally, no US serviceman has ever been died for Israel, and Israel is very keen that none ever should. That’s why it resists any suggestion of stationing US peace-keeping forces in the area. The last thing Israel wants is US blood spilled for it, and the blame that would come with that.

Thirty-four Americans were killed and 171 wounded on the USS Liberty in 1967 during the Six-Day War.

Go back to HuffPo or whatever leftist Jew-hating site you came from.