7 out 8 counties certified. Brindisi gained one vote. One. Now he’s complaining about irregularities with the voting machines. 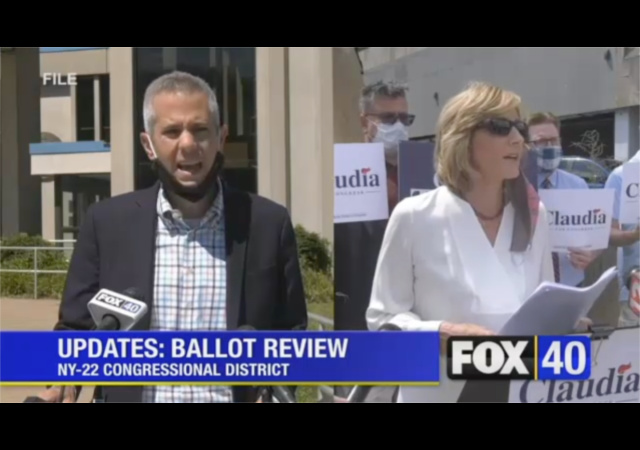 Seven out of the eight counties in New York’s 22nd Congressional District certified votes in the 2020 election.

News Channel 2 contacted each of those seven county’s boards of election Tuesday afternoon and here is the net gain or loss for each of the candidates :

Oswego County reported in open court on Monday that Tenney had picked up one vote, so that is unofficial at this point, as neither of their commissioners got back to us on Tuesday.

Tioga county had no change in votes.

With all of these numbers, that means Anthony Brindisi gained a total of one vote on Claudia Tenney’s lead, which was last reported on Friday as 122, so he now trails by 121 votes, but again this new total is without Oneida County, whose certification is on hold.

New York Supreme Court Judge Scott DelConte granted a temporary restraining order blocking Oneida County from certifying its election results pending further hearings. The stay is due to concerns that, if results were certified and a winner was seated in Congress, the New York Appellate Courts would be unable to rule on a winner if they found irregularities.

Judge overseeing the #NY22 case just issued the ruling he spoke of yesterday:

Brindisi's ask for an audit is too late, too broad and hypocritical, given Brindisi's previous argument that judge had no authority to do so.

However, below is why another week of delay is warranted: pic.twitter.com/rzTpcPFkok

Brindisi wanted DelConte to block all certification because he wants a full “hand recount of all ballots.” After three months of counting and filings, Brindisi claims there are “substantial errors and irregularities” with the voting machines.

My campaign's statement on the latest developments in #NY22 pic.twitter.com/II0jQsnVpd

It’s time to certify the winner of #NY22. Here’s my campaign statement on the completion of the final canvass of votes. pic.twitter.com/3Wx8AmkcKz

When will Brindisi be charged with sedition? Questioning the results of an election is forbidden. I assume twitter has deleted his account and the National Guard is rolling into rural upstate NY as I type.

The onus is on Brindisi to make a coherent claim and it sounds like it’s high time he accepted that he lost. I care little for sore losers no matter what political leanings they might have.

Is Brindisi related to Stacey Abrams, or Shrillary, or Al Gore?

Seems that they also have not accepted that they lost. But when Trump claims voter fraud, with proof, he is seditious?

I am old enough to remember when it was sedition to question the results of an election. Shouldn’t Twitter and Facebook shut down Brindisi‘s accounts? Shouldn’t banks close his savings and checking accounts? Shouldn’t credit card companies refuse him credit? Shouldn’t lawyers who represent Brindisi be disbarred?

“I am old enough to remember when it was sedition to question the results of an election.”

I have bagged salads in my refrigerator that are old enough for that.

The double standard so glaring. Yet no MSM cares.

Dems wail about polarization (blaming Trump of course) when its actually their allies in the media the fuel it with their blatant double standards.

Not really Trump lost by millions of votes yet contested even after losing 60+ court cases. This case has a difference of 121 votes.

Are you willfully obtuse or is it just an inherent trait?

Neither I’m just pointing out there are considerable factual differences in the comparison which makes it poor.

Then “let thee count the ways” why this is different…using apples to apples”.

1) The vote difference in the Presidential Election was counted in the millions over all vs 121 votes in this case
2) The court process for the presidential campaign was exhaustive with 60+ losses for the Trump legal team vs some limited signed of court buy in for further analysis in this instance. Presumably the court has allowed the stay because of the merits of the case vs Trumps cases which were deeply flawed.

Says someone who clearly has no understanding of how Presidential elections work.

In what sense Mass insanity?

I’m not clear that anything I’ve said could lead you to that conclusion?

Really, this needs to be explained? Because the national vote difference is meaningless. We are talking about a few 10s of thousands of votes that make a difference in GA, AZ, NV, WI not millions

Mark – Trump did not “lose 60+ court cases”. He actually filled only 4 cases. None were heard. Other parties filed more than 40 cases – only want was heard on merits and it was dismissed because the plantiff could not assemble sufficient evidence that the # votes in dispute would have changed the result – and that lack of evidence was the result of short time frame to investigate and make a case.

Mark – If you really believe the election was free from fraud and irregularities, as the MSM repeats constantly – then why don’t you and other Dems support an independent review of the 2020 election? An independent review would restore confidence in our election process and, if any issues are discovered, they can be fixed for the next election and thereby prevent the distrust that we have seen with the 2020 election.

70+ million people – including Rs, Ds and Independents, think this election was not fair and the votes were not accurate in many states.

The only way to restore confidence is an independent review.

“The only way to restore confidence is an independent review.”

the only way to really do that is to compare the voter logs/envelops to the vote count, problem with that is there no integrity in the mail in vote, e.g. vote for Trump goes to the shredder and the vote for Biden gets counted

Is there evidence of what you claim. No there isn’t. Spurious claims like that without evidence or even reasonable conjecture are somewhat self defeating.

Too let Ben..Mark has drunk the Kool Aid, now he’s user in need of Re-hab.

Im not sure i see a difference if the 40+ cases you cite were filed to the benefit of the Trump legal team?

Correct insufficient evidence was presented, but it was worse than that the evidence they did present was riddled with errors. A number of the expert reports produced turned out to be absolute crap. Witnesses presented were either ignorant of what they actually saw, or bat shit crazy in some cases.

I do support an independent review of the election i think it would help settle a lot of the issues with regard to voter confidence. It should investigate fully the entire basis of Trumps claims and correspondingly refute them in a single well written well cited well supported document; along with appropriate analysis and solutions to genuine instances of fraud to ensure voting integrity is as high as possible without the effects of voter suppression. It should also analyse how much fraud has taken place and what impact has taken place over the last 20 years. I cant speak for others but that is my personal view.

I should be clear though the reports purpose is to restore confidence I don’t believe given the lack of evidence thus far that any substantive fraud took place.

Weirdly I understand that Lin Wood is being investigated for election fraud but that’s a developing story.

But the machines were okay counting votes for Biden* so why aren’t they okay for you?

Would Pelosi & Co. really want to seat a Dem congressman who apparently thinks Trump should still be president?

Irregularities with the voting machines? No way, Doninion and it’s team of auditors have fully checked out the machines and found that they work as designed. Anyone who questions that will get canceled and sued by Dominion. Just accept the results and move on.

Brindisi needs to be brought up on charges of treason, according to the new rules™ questioning the reliability of voting machines is doubleplusungood, is it not?
Ms Pelosi, do your job…

Expecting the Insurrection and Incitement charges to be handed down on Brindisi any minute now for daring to complain about the voting machines.

“Brindisi wanted DelConte to block all certification because he wants a full “hand recount of all ballots.”

Impeach the bastard and we can all move on.