“The Constitution says there can be no titles of nobility, so while the president can name his son Barron, he cannot make him a baron” 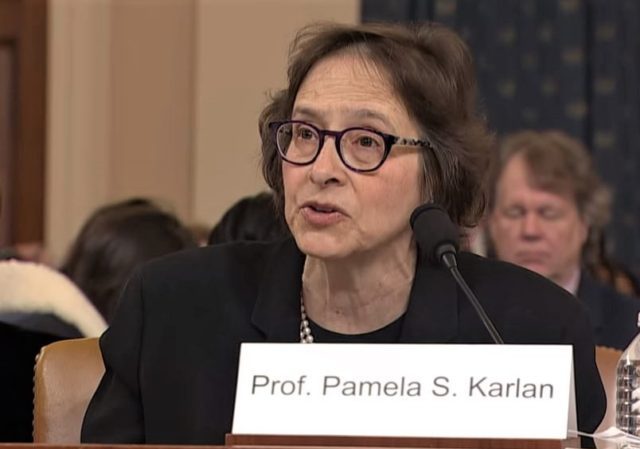 Stanford Law Professor Pamela Karlan is leaving her position on Facebook’s ‘oversight committee’ to join the civil rights division at the Department of Justice.

You may remember Karlan from her testimony at Trump’s first impeachment hearing in 2019.

A law professor serving on Facebook’s independent oversight board is resigning her post to join the Justice Department’s civil rights division on Monday.

A notable transition: Pamela Karlan, a Stanford Law professor who was chosen as one of the group’s 20 original members, has been tapped to serve as principal deputy assistant attorney general in the civil rights division for the Biden administration, the board said.

“Pam Karlan’s legal and civil rights expertise played an important part in shaping the Board and we’re grateful for her contributions,” board spokesperson John Taylor said in a statement. “The Trustees and Board members congratulate Pam on her new role and wish her the very best.”

In 2009, Karlan was passed over as a possible U.S. Supreme Court nominee because she was too radical for Obama.

This is also the same woman who used her time at the impeachment hearings to mock Barron Trump:

If Democrats hoped that today’s panel of anti-Trump law professors explaining impeachment to “deplorables” was going to sway public opinion, they may have miscalculated. Bigly.

Stanford law professor Pam Karlan decided the House impeachment hearings of the president of the United States was a great place to mock the president’s 13-year-old son.

She later offered a non-apology apology:

Pamela Karlan: "I want to apologize for what I said earlier about the president's son. It was wrong of me to do that. I wish the president would apologize, obviously, for the things that he's done that's wrong, but I do regret having said that." pic.twitter.com/7lYiRWCKjw

She also once described how she crossed the street rather than walk by a Trump hotel:

Do you already feel more secure in your civil rights?

She came across as a creepy harridan and a second rate legal mind making a living off of grievance and pretension.

More like 10th rate, a Caucasian version of Affirmative incompetence.

Biden’s admonistration keeps managing to scrape ever deeper from t
he barrel of rejects.

Biden’s admonistration keeps managing to scrape ever deeper from the barrel of rejects.

Biden is just showing he has a full grasp on how Affirmative Action works.

It’s good that the lefties have no shame. I’d be mortified thinking I was part of this gang of lowlifes and mental defectives.

Any education system, or legal system with people like this in senior positions should be burnt to the ground and rebuilt on a different basis. You can’t fix anything this far gone.

Not surprised, Leftist circle back and keep popping up somewhere else. Like the graft paid to Hunter they keep each other in funds and jobs.

this detritus has no clue about rights

That has no bearing. She has the right plumbing, and the right bitter, scowling attitude for somebody like her have.

Remember the television program mystery science theater 3000? I can just hear the character crow now, he says, about her, “she has Subaru Forrester written all over her!”.

Friendly Grizzly…
You won teh interwebs with that one!

On the serious side, this woman looks like she has never enjoyed any pleasure or joy in her life at all. She brings to mind the story about the child who will give them a pony worries about, well, what ponies generate out the their north end when they’re in a southbound direction. The complete pessimist. I grew up in the culture of that, and walked away from a decades ago. I feel a lot better for having done so.

I always thought the cliche was the RAV4, but it appears you are correct, sir.

That’s Guam-tipped-over stupidity, Barron and baron. I was hoping she was the “Barron will be the first home-school shooter” joke maker. That at least was funny. Everyone else was scandalized but I thought it was good.

Classless and clueless like many leftists, particularly in academia.

This is the woman with such serious mental problems she claims to have crossed the street to avoid walking in front of the Trump hotel in DC.

I’m sure, though, she calls out those who cross the street when they see four teens* walking toward them with menacing looks and body language.

An all too common example, 2 useless punks murdered homeless veteran.

I seldom get emotional with reading media. However, when I read that story, I was in tears. I wonder, to this day, what was going through his mind is he died. I hate to think it was, “this is what I fought for?”

This was a horrific crime, and I find my “old” beliefs constantly challenged by things like this. Man’s inhumanity to man. How is it possible to treat another human being in this manner? What kind of monster does it take to inflict this kind of unwarranted abuse on a fellow human being whose only ‘crime’ is being homeless? It truly hurts my heart. And my soul.

By that, I assume you refer to “dazzling urbanites”…

Delicious irony: the site of a former mental hospital in the state of California is now a university campus.

What had been the stay at home in Camarillo is now California State University Channel Islands CSUCI. Pronounced by many as “see sucky”.

By coincidence, what used to be a seat of government has likewise been changed into a mental hospital, only the inmates are running the asylum.

Remember the movie “King of Hearts. Our USA federal government.

Weren’t we scolded for 8 years that Presidential children were “off-limits”?

Be quiet, you racist!

One pleasure that I am taking is this: at least we are not constantly reading about the Obama children in the press. No equivalent of Caroline and John John stories. Nothing about children who have the suffix bird on their names. Nothing about a buck tooth no talent getting multi hundred thousand dollar jobs for doing nothing. I take my pleasures where I can get them.

Maybe not in the press, but they’re all over the clickbait ads at newsblogs.

Then that must be it. I scanned the front pages of the supermarket tabloids when checking out. I haven’t seen them there yet.

And that is nothing compared to the evidence of bribery by foreign governments and entities.

I don’t consider that an improvement.

Not one smidgen of bias there.
I’m normally a rational, sane human with empathy for my fellow man, but these people are making it awfully tough for me to find a silver lining. Lord, you gave me courage and wisdom. I pray you restrain my tongue.

Ooops!! I am totally sorry, I am in complete agreement with you but I am extraordinarily clumsy on a phone.

So it progresses. I wonder if Ginsburg, as she approached the end of her evolution, had an epiphany about her choice(s).

These people are corrupt monsters. They’re too imbedded in our government AND in the GOP.

Our only hope is a serious secession effort. We’ll never survive if we don’t begin it.

You really are the organ grinder, aren’t you? What three-letter agency do you work for?

Secession is a worthless idea. You cede sovereign territory to communists, who consolidate their land, then come right back and start immigrating to your territory exactly as they did to colonize the big chunks of America that they control now.

You may as well “solve” a termite infestation in your house by closing off the rooms where you have found termites.

This is how it works, folks — don’t ever fool yourself otherwise.

Karlan’s lack of decency and compassion alone disqualify her from any job in the DOJ or other government agency but they are merely the tip of the iceberg. More importantly, someone so mentally unstable as to be unnerved simply by passing a building owned by someone she dislikes is not a wise or even healthy individual. Her own statements prove that she is a danger to herself and others. Were she to be allowed to drool without a spotter, she might drown. Such a person must not be given responsibilities for or power over others. She needs help, not a place at the Federal Trough.

All I can think is “Nosferatu!”

A Leftist with a sense of humor who thinks she is punny!

Leftists with a sense of humor are so rare, we should put up a statue of her!