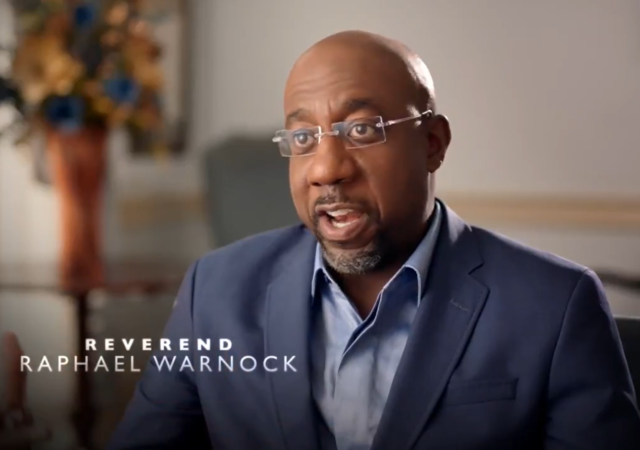 Speaking to the Washington Free Beacon, Washington alleged several abuses took place at the camp, including being required to sleep outside after having an accident (he was a child) and an incident in which camp counselors threw urine at him.

Washington said, “I don’t think nobody like [Warnock] should be running for damn Senate nowhere, running a camp like that. He should not be running for government.”

Washington’s mother sent him to the camp, along with his sister Dominique, because they just moved to Maryland from California. She hoped they would make friends:

Counselors were young, in their late teens or early 20s, and showed little interest in taking care of the campers, Washington said. As a punishment for wetting his bed, he said a counselor forced him to spend the next night sleeping outside by himself on the basketball court.

“I’m like, ‘Hell no I’m not, it’s cold out there,’” he said. “[The counselors] wouldn’t let me in the house, not at all. … Shut the door to the cabin, locked it,” he said. “It was dark. There wasn’t nothing out there but the basketball court. I ain’t never experienced nothing like that. Like, you’re not in a tent, you’re not in nothing. You’re just out, God knows where.”

Counselors also threw urine on him from a bucket they used when there wasn’t a bathroom nearby, he added.

“I went through that experience myself. I don’t even like talking about this shit. That shit happened. … It was like in a bucket. They would keep that shit in a bucket,” he said.

Washington said he saw counselors “grab kids,” but didn’t know the extent of abuse at the camp or whether others had experiences similar to his. “I just knew that shit happened to me, and that’s what I was worried about, me and my sister,” he said.

Washington just wanted “to get the hell away from that camp” and not “spend another day there.”

“That camp was real messed up,” he stated.

According to Washington, the counselors did not allow the campers to call their parents. Washington was finally able to tell his mother:

“I can hear her in there, screaming at them,” Washington said. “Next thing I knew, my mother was going to court. … I thank my mother for doing what she did. She is a life saver.”

The alleged abuse was enough to file a lawsuit in 2003.

When inspectors from the Maryland Department of Health and Mental Hygiene visited Camp Farthest Out in 2002, they also found multiple health and safety violations.

“Staff are not supervising campers,” wrote a health inspector in a July 31, 2002, report. “Conversations w/ medical staff & pool staff indicate that this is routine among the counselors. It was observed during inspection today.”

In June 2003, the Department of Health denied Camp Farthest Out’s certificate to operate a youth camp. One reason for the denial, according to the records, was that the camp failed to report at least five findings of child abuse levied against its director, Brian Carter, by the Department of Social Services.

Authorities arrested Warnock at the camp in July 2002 when “a Maryland state trooper said he repeatedly disrupted her interviews with counselors while she was investigating allegations of child abuse.”

They charged him with “hindering and obstructing” the police, but the state prosecutor dropped the charges.

Then-Deputy State’s Attorney Tracy Gilmore explained it was all “a miscommunication.” She also said that Warnock and another reverend turned out to be “very helpful with the continued investigation.” Prosecuting the two men “would not have been a prudent use of resources.”

A court docket from the case shows that lawyers from both sides moved to dismiss the case “with prejudice” in May 2005, a resolution that frequently occurs when lawsuits are settled out of court. Officials from the courthouse and the Maryland state archives told the Free Beacon that they are unable to locate any records from the case. The lawyer who represented Washington’s family said he was unable to discuss the matter on the record.

Washington’s sister, Dominique, who also attended Camp Farthest Out the summer her brother says he was abused, corroborated the family’s involvement in the lawsuit when contacted by the Free Beacon. Another source close to the Washington family told the Free Beacon that the lawsuit was related to an incident when counselors “poured urine on [Anthony], at the camp.”

Georgia Sen. Kelly Loeffler (R), who is being challenged by Warnock, demanded that he respond to Washington’s allegations:

Loeffler, Warnock’s Republican opponent in the Jan. 5 runoff election that will determine control of the U.S. Senate, called the allegations of abuse “disgusting” and “alarming.” She said Georgians have a right to know what Warnock’s involvement with the camp was, and how much he knew about the alleged abuse.

“Clearly something was going on here,” Loeffler said in an interview with National Review. “This is the camp that he ran, that he oversaw, that he was involved in every single day, that was later shut down and he left the church.”

ABC, NBC, and CBS did not cover the report in The Washington Free Beacon. Fox News’s Special Report mentioned it.

Warnock’s campaign has not responded to the report.

Another “Reverend” we can live without.

Yeah, not sure what this has to do with the Orange Man. Back when this happened the Orange Man was a liberal Democrat and all his attackers thought he was the greatest. They didn’t turn on him till much later.

Take note that there were two separate legal actions. One was a civil lawsuit by the children and their families, and one was a criminal charge brought by the state. The criminal charge was dropped for being “not in the public interest” (i.e. someone pulled some strings for him), the lawsuit was settled (i.e. the families got some money). Just don’t mix them up.

The truth comes out, eventually.

Joe says he wants to visit that camp.

“….Biden team was fed false info to test the security of that info with Biden and Co. and within 30 minutes that false info was released to China……”

From all over the web