More to be counted early January, so the lead could switch again. What a mess, yellow stickies falling off, inaccurate time stamps, ballots found in drawers.

The next hearing will likely take place on January 4.

Tenney led by 19 votes for a while.

And just to reiterate: These votes were not "miraculously found" as some Twitter folks claim.

These are about 1,700 affidavit votes set aside and never counted that are now being reviewed for the first time, first by elections staff and campaign reps and later by a judge. #NY22

I don’t know how Justice Scott DelConte has kept sane throughout this process. Tenney insisted dead people voted, but DelConte reminded her:

“It’s perfectly normal when you have about 60k absentee votes that someone may die between the time they put their absentee ballot in the mail and election day.”

DelConte: "No dead people have voted in Madison County. Is that, correct?"

Judge: "It's perfectly normal when you have about 60k absentee votes that someone may die between the time they put their absentee ballot in the mail and election day."

Patrick Lohmann at Syracuse.com has the end-of-day status:

Incumbent Anthony Brindisi got a couple small wins in the latest day of a courtroom battle that will determine the winner of the 22nd Congressional District race, but the contest is still far from over 50 days after Election Day.

Brindisi (D) has a 14-vote lead over challenger Claudia Tenney (R) after several hundred affidavit ballots from Oneida County were finally tabulated this week. The new counts from Oneida County put Brindisi at 155,625 votes to Tenney’s 155,611, which amounts to a .00004 percent lead for Brindisi.

And a judge ruled that about 120 absentee ballots from Madison County would remain in the unofficial vote totals despite Tenney’s attorneys’ efforts to toss them out. Brindisi’s attorneys wanted those votes to remain in the count.

But the number is certain to change, and Tenney could very well re-claim the lead, as more ballots from Oneida County are reviewed and then counted. And a judge will still have the final say in whether those ballots will be official when the parties meet again in court early next year.

The lead has changed several times. Tenney started the week up 19 votes, and yesterday the margin narrowed to three to five votes.

Remember yesterday? It was all about Madison County officials holding absentee ballots overnight in a jail cell and timestamping them on November 4.

Madison County Board of Elections Commissioner Mary Egger said again that they received the ballots before November 3 (election day) and timestamped them on November 4 when they took them out of the cell.

DelConte ordered that “119 ballots would need to be corrected based on the timestamp.” A sheriff for Madison County picked up the ballots and returned them to the board of elections. 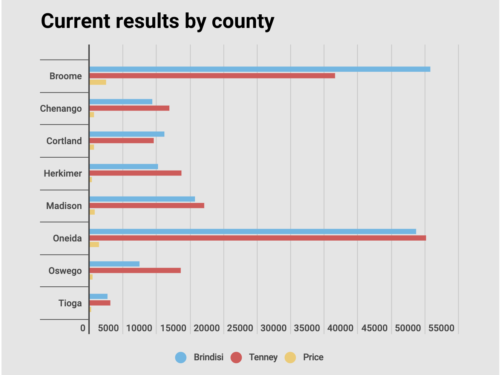 I do not believe for one second that this is a totally legitimate vote. When you “find” ballots in draws, trunks of cars, under toilets, you know they are frauds.

The left are masters at stealing elections, and this is a prime case of fraud. I doubt the cheater Brindisi will lose, it’s always been their MO to count the votes, add in the additional ones they need to win, then find a way to stop the counting. It is sickening that we do not have clear, concise elections.

“The left are masters at stealing elections…”

Not really, it’s just the “right” will do nothing about it ‘cuz they’ll be called racist homophobes.

No. It’s more direct than that. It’s the lack of determination to do anything. Hang the name-calling, they could work past that. But, they want. They’re spineless!

notamemberofanyorganizedpolicital in reply to The Friendly Grizzly. | December 23, 2020 at 9:52 pm

Invertebrates, jellyfish. They deserve to lose.

If it’s actually close then democracywise it doesn’t matter, except the democrats always win these things and it adds up.

Well…. the old playbook of “finding” extra ballots is SO old as to be institutionalized. It makes a joke out of voting, but to Dems stealing is second nature. Crime pays.

notamemberofanyorganizedpolicital in reply to alaskabob. | December 23, 2020 at 9:54 pm

They will reap what they sown.

they have sown is death around the world with needless wars to enrich Dems-selves.

This is also why we don’t want the the Presidential election to be decided by the popular vote…because Dems are ballot stuffers.

Every (illegal and fraudulent) vote counts.

And just to reiterate: These votes were not “miraculously found” as some Twitter folks claim. These are about 1,700 affidavit votes set aside and never counted that are now being reviewed for the first time

Set aside as in those Atlanta suitcases that are JICYFU ballots (just in case you f**ked up and didn’t already put in enough manufactured ballots) that popped up when they realized that the Trump vote was more massive than even they imagined? I used to be a Democrat until I realized, after studying up on elections past and the most corrupt cities of the US (Chicago, New York, LA, SF, Washington DC, etc) that the party that purported to be for the people was actually only for the people in big government, big business, Wall Street, the Chamber of (Horrors) Commerce, etc!! Anyone who believes that they care about the plight of those whose jobs have been leveraged away (they needed unemployment to go back to typical Democrat levels) and that education is to be supported by the government (they don’t support education, only the unions that are zippered tightly in their back pockets). What do they really care that our children are being consistently dumbed down by way of things like the 1619 pro-jectile. They only want the liberal put into liberal arts at the expense of fact based education. I have even seen where some institutions of “higher” (likely the ones who turn a blind eye to drug use) learning are injecting race, gender and identity politics into areas such as chemistry, biology, mathematics, engineering and physics. That should give you as warm and fuzzy a feeling as sitting in a dentist’s chair and realizing that your dentist got his/her/its degree because the cancel culture demanded that the blind student be given full access to the dental program without regard to the physical handicap or the Parkinson’s patient be given the opportunity for a surgical residency when the Parkinson’s isn’t under control. I could favor this provided they spend their first ten years on the job working exclusively for Congress and no Congress critter could be treated by any other doctor or dentist. If it works for them, then okay–I’ll try.

“Set aside and never counted” is the very definition of “miraculously found”.

No, it is not. These ballots were never lost. At no time did anyone not know where they were. What do you think is supposed to happen to affidavit ballots? Go on, tell me. How did you think affidavit ballots are handled, if not exactly the way they were?

They’re set aside, under lock and key, and not counted until the envelopes can be individually adjudicated. Which doesn’t happen until after all the other ballots have been counted and all other disputes resolved, because it’s a lot of work and might not prove necessary.

If the number of affidavits is not enough to change the result then the election can be declared without them. Then a judge is no longer needed, and the board of elections can go through them one by one at its leisure and decide what to do about each voter for next time. Or it can just send them all new registration forms and not bother.

The only odd thing I see here is that I would have thought they would timestamp the envelopes when they put them in the cell, not when they took them out. Doing it when they come out sounds like something that they decided to do because it’s more convenient, never thinking that one day they’d have to justify it to a judge.

In any case, that makes this very different from ballots that are “mysteriously found” lurking somewhere unsuspected in the BOE offices, let alone in someone’s car, etc. Those should be treated as fraudulent, even though surely some of them are genuine; they should be treated like police evidence that was not checked in to the evidence room, and could therefore have been tampered with. But these ballots were in the evidence room. The fact that they’ve been sitting there unexamined since then is not suspicious.

I can’t disprove your premise, but I am skeptical.
1.I haven’t followed this race, but is that the excuse given by the election officials? Democrats love to assert incompetence when they are caught.
2. Found ballots always seem to drag the Democrat over the finish line. I don’t recall any time the Republican has won.
3. Pelosi is obviously worried about her shrinking majority. If she intervened to drag the Democrat across the line in the House it would be pretty hypocritical even for her. Perhaps I give her too much credit in that regard, but it certainly is better to win by found votes. So, voila found votes.

Nobody is asserting incompetence here. These ballots have been handled exactly by the book, except for timestamping them when retrieving them from the cell instead of when they come in.

And “found ballots” do sometimes favor Republicans. For instance in this very race, remember when Chenango County found a batch of 55 affidavit ballots, plus 2 absentee ballots? Of those, 11 were invalid, 4 didn’t vote in this race, 17 were for Brindisi, and 25 for Tenney. That increased Tenney’s lead by 8.

Or cast your mind back a few weeks to when Floyd County, GA found a batch of 2,631 ballots, and Fayette found 2,755, both of which batches turned out to favor Trump. So instead of claiming the ballots were fraudulent, Reps complained that the Dems had “obviously” tried to disappear them but had somehow failed. Sounds like with some people everything is evidence of fraud.

And Pelosi doesn’t control the county boards of elections in this district, so they’re not likely to be “finding” votes on her orders.

This time they’ll make it look like a “close steal”.

Start over, invalidate this farce.