“Looks like Thom Tillis was re-elected at this point,” Cal Cunningham’s top political strategist said during a podcast Thursday. 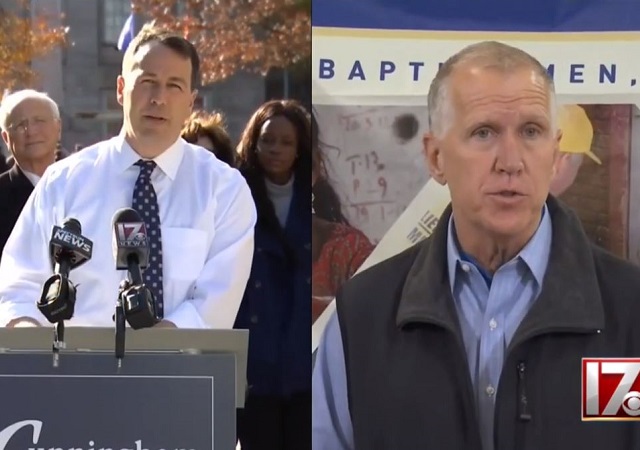 With that in mind, some are wondering why the state has yet to be called for Trump and Tillis considering the state board of elections website shows “100.00% precincts reported.”

The race hasn’t been called yet because as of Wednesday there were 116,000 absentee ballots yet to be accounted for. That number does NOT include anyone who may have requested a ballot but ended up voting in person on Election Day. And because of the September backroom shenanigans involving Democrat super-lawyer Marc Elias, NC’s Democrat Attorney General Josh Stein (who is on the ballot, of course), and the Democrat-controlled state board of elections, the deadline for receiving absentee ballots after Election Day was changed from 3 days to 9 days.

So a ballot that is postmarked by Election Day (11/3) can be received as late as November 12th (next Thursday) and still count assuming it was properly filled out (signed and with witness signature).

GOP leaders in the state legislature filed a lawsuit not long after they found out in September about the changes Democrats made behind closed doors to NC election law, but the Supreme Court ultimately allowed the revised deadline agreed upon by Elias, Stein, and the NCBSE as part of a prior lawsuit “settlement” with Democrat-aligned groups to stand.

In addition to those outstanding absentee ballots (which includes military ballots), the state reported Thursday that there are around 41,000 provisional ballots to review and process. At least 50% of those will probably be tossed out, as was the case with the provisional ballots from 2016.

The Raleigh News and Observer’s Tyler Dukes provided an update/analysis Friday morning on where the numbers on the remaining ballots stand:

County Election Boards have so far received ~32,000 accepted mail-in ballots since Election Day. But those ballots have not yet been included in the state's unofficial results. https://t.co/xU4kiJN9Te

They need to be approved by county boards in open meetings first.

But that 171k figure is — and I cannot stress this enough — an *absolute maximum* of potential uncounted ballots.

The real figure is likely to fall far short for the caveats noted above.

While there are some down-ballot races that could potentially be impacted by the final vote totals, which the state board of elections says they will release next Thursday or Friday, media outlets like the News and Observer are acknowledging that the final numbers are unlikely to propel Biden and Cunningham to victory:

With an estimated 172,000 potential ballots left to count, North Carolina’s election results are far from final.

But the updated tally is unlikely to change the results of the state’s two biggest races.

Even more importantly, Cal Cunningham’s top political strategist conceded in a podcast Thursday that it was likely that both Trump and Tillis won their races:

The Cunningham campaign is also signaling that they are not confident that there are enough outstanding votes to change the outcome.

Cunningham campaign manager Devan Barber said “we plan to allow the process to be carried out so every voter can have their voice heard.”

Cunningham’s top political strategist Morgan Jackson was more direct. In an interview on the “Tying it Together with Tim Boyum” podcast, Jackson said that “President Trump certainly has a lead now there are still ballots out to be counted and we’ll see what that looks like at the end of the day but it looks like he may have won North Carolina. Same with Senate race. Looks like Thom Tillis was re-elected at this point.”

In October after news of Cunningham’s affair with the wife of an Army veteran broke, some pollsters and Democratic strategists suggested that his numbers weren’t being impacted much by the scandal.

Please send this to the multiple reporters and pundits that constantly wrote the scandal made no difference https://t.co/iaNGBZKrfF

In 2016, Ross ran 2 and 3 points behind Clinton in Wake and Meck, respectively. So some of it is natural. But would be interesting to figure out how much is scandal related. https://t.co/DOWEUAaOW1

If Tillis does end up being declared the winner, it will be a repeat of what happened in 2014 where he was behind in the polls against then-Sen. Kay Hagan (D) for much of the race but then surged late in the game thanks, in part, to negative stories about Hagan that broke in late September/early October. Tillis ended up winning in an election night nailbiter by 48,511 votes.

If Trump wins, he should receive all of North Carolina’s 15 electoral votes.

Never underestimate the will of Dems to unabashedly cheat and try to spin it as some incredible human triumph comeback story.

notamemberofanyorganizedpolicital in reply to healthguyfsu. | November 6, 2020 at 4:52 pm

They learned well for their father, Adolph Hitler.

“…Alexandria Ocasio-Cortez has requested the immediate assembly of

so the far-left can target Trump supporters for elimination. Not surprisingly former President Obama’s data-assembly lead, Michael Simon, affirms the list is already being assembled.

The Bar-Tender Thief has Spoken!

Tell us what you are seeing.

Cunningham: He screwed his girlfriends and Chuck Schumer too.

notamemberofanyorganizedpolicital in reply to EBL. | November 6, 2020 at 4:51 pm

I’m Joe Bite-me and I endorse that message.

Where the NC ballots secretly security-marked with invisible inks also?

HUGE EXCLUSIVE: Keep the Faith – President Trump Will Win The Election Based on the Constitution Per Retired Intel Operative Tony Shaffer

Trump Was Ready For This

A hypothetical question for all the Democrat trolls following my feed…
What if DHS anticipated DNC counting fraud.
What if they “tagged” each legitimate ballot.
What would happen if DHS does an audit of all counted ballots and find ballots without the tag – what happens then?

txvet2 in reply to notamemberofanyorganizedpolicital. | November 6, 2020 at 8:57 pm

For that to matter, they have to get their hands on the ballots. So far, they can’t even get in the room.

CKYoung in reply to notamemberofanyorganizedpolicital. | November 6, 2020 at 7:33 pm

“In a separate statement, the State Department accused China of engaging “in massive illegal spying and influence operations”, interfering in “domestic politics” as well as having “coerced our business leaders, threatened families of Chinese Americans residing in China, and more.”

That seems like it should have been a big story for the US msm. The BBC covered it.

President Trump has been dealing with the left trying to get rid of him since the day he came down the escalator. They’ve used every means; fair, unfair, legal and illegal. He has been telling us for at least two years now that they would be cheating this election. I don’t believe for one second that he wasn’t ready for this. People disbelieve what he says at their own peril. Also, the silence of many other in the GOP could mean several things. 1. They are political cowards. 2. They have been briefed on the plan to catch the democrats cheating and get to sit back and watch it unfold. If #1, PDJT smokes out his fair weather friends and plans their future political demise. If 2, the GOP can keep their hands clean while collectively shaking their heads sadly as the democrats are destroyed while exclaiming “Say it ain’t so, joe!” There are are of course certainly other scenarios, either way, I’m not worried. Steaks, a scotch and cigar tonight. MAGA.

The fact that Dems are holding out for an adulterer to win is disgusting.

That’s pretty common in politics, in all parties. If you insist on only modest, chaste, and virtuous leaders you will not have a fighter when you need him.

If I wanted a fighter, I’d elect a boxer. Why would I elect an adulterer? There is already no shortage of sneaky f*ers in Congress.

Careful. Adulterers come in both flavors and unless you are ready to condemn one with an R you had better think twice about condemning one with a D.