After his campaign confirmed the texts were genuine, Cunningham issued a statement of apology and noted he is staying in the Senate race 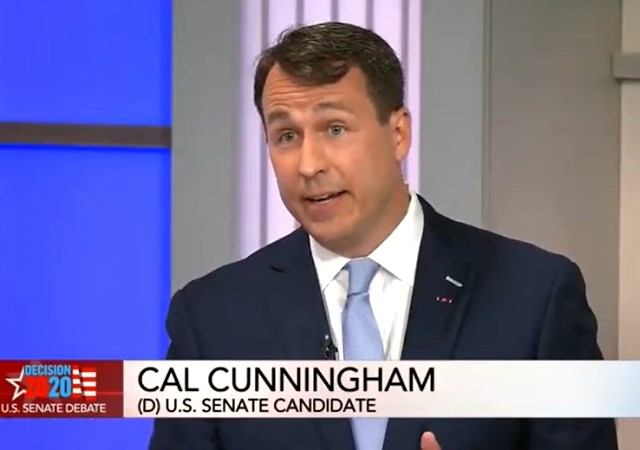 North Carolinians were hit with a double whammy on Friday on the political front with two major developments in the U.S. Senate race.

Sen. Thom Tillis (R) announced he had tested positive for the Wuhan Coronavirus just a day after we learned President Trump and First Lady Melania Trump were diagnosed with it. Tillis said in a statement that he had no symptoms and would be quarantining for 10 days per doctor’s orders.

The other big news in the race was the admission of Tillis’s Democratic opponent Cal Cunningham to exchanging “sexts” with a California woman who was not his wife:

Cunningham sent several text messages to a woman in which the two discussed kissing and hypothetically spending the night together, according to screenshots of the messages that were posted online Thursday. The messages were originally posted by the right-wing website NationalFile.com and confirmed by the News & Observer of Raleigh, N.C., late Friday.

“Would make my day to roll over and kiss you right now,” Cunningham wrote in one of the messages. Dates were not included in the screenshots. The woman sent a separate text message asking when she could see him, writing, “I want to kiss you,” and later, “I want a night with you,” according to the screenshots.

His campaign confirmed Friday that the texts were authentic.

National File went into more detail about the sexts than other media outlets did, noting how the two appeared to be planning to get together assuming he could ditch his family and staffers:

California strategist Arlene Guzman Todd is the woman with whom Cunningham was sexting. According to National File, she’s married to Army veteran Jeremy Todd, an active-duty servicemember who served in combat roles in Iraq and Afghanistan.

Here’s a screengrab of all the texts:

When I first saw “starch your white shirt and be ready to kiss a lot” I thought this had to be fake.

Cunningham, also an Army veteran who served in the Iraq and Afghanistan wars, issued a statement Friday night apologizing for his actions and noting he was staying in the Senate race:

Statement from Cal Cunningham on sexual text messages between him and a woman other than his wife, as first reported by National File. https://t.co/4S8OzSRhsu pic.twitter.com/TRHvE81TVJ

Just a few days ago, Cunningham and his wife Elizabeth did an interview with a local news station in which the reporter noted his wife said that the man Cunningham was on the campaign trail was who he really was. Clearly, this did not age well:

Cal Cunningham and his wife sat down with Spectrum News recently. It aired earlier this week, just before news of his sexting broke.

“Elizabeth says as voters evaluate their decision this fall, the man her husband presents himself to be in public is who he is in real life.” pic.twitter.com/O4OARFGgbZ

In light of the news of Cunningham’s digital affair with another woman, the question is once again being raised as to the wisdom of early voting:

DEVELOPMENTS IN THE NC-SEN RACE IN THE LAST FEW HOURS:

Thom Tillis: gets COVID-19.
His challenger Cal Cunningham: caught sexting with a woman very much not his wife.

Tell me again about why early voting is anything except a pox upon the republic that parties cynically exploit.

Cracks were also made about the nature of the sexting:

*reads Cal Cunningham’s “and you are historically sexy”* pic.twitter.com/19R7d8DcKH

Others pointed out the similarities between Cunningham’s fall from grace to that of disgraced former Democratic Sen. John Edwards, who cheated on his wife Elizabeth as she battled cancer:

When it comes to the NC Democrats, the apple doesn’t fall far from the tree, apparently #ncpol #NCSen pic.twitter.com/HJlMFiZ3d0

Someone graduated from the John Edwards School of North Carolina Politics https://t.co/s8H51UgT5z

North Carolina, y’all got a problem with these cute boys with hungry eyes and unfaithful actions. Get it together.

Cunningham currently leads Tillis in the polls, but between his wacky Wuhan virus vaccine conspiracy theories and now this, that could change in the coming weeks.

In his race with then-Sen. Kay Hagan in 2014, Tillis was also behind in the polls but had a late surge in the campaign and went on to win the race.

Thank goodness this is finally coming out. I saw it yesterday, but there was virtually no press on it.
Hopefully it will sink this self-described “family man”. We’ll endure Tillis one more cycle, who at least is not a D.

‘Family’ is just a social construct…

Of course he’ll stay in the race. Commies don’t have to abide by normal moral standards.

This guy’s one of the pervs. What else has he done?

“Tillis was also behind in the polls but had a late surge in the campaign and went on to win the race.”

Those Republicans and their late surges. I don’t know how they do it every time.

Likely they were never behind to begin with.

Meh. Credible allegations of rape only increased William Jefferson Clinton’s and Joe Biden’s appeal among female voters, so I doubt Cunningham will feel any negative effects. Too many female voters are convinced that they are living in “The Handmaidens Tale” and that the only thought on men’s minds is to rape and impregnate them. The Cunningham campaign will know how to stoke that bigotry.

I wonder if sexting is better than being caught with a live boy or a dead girl? Mrs C is no doubt annoyed with Cal. You should see his folksy local boy ads on local tv.

I think Gary “hot pant” Hart was the last liberal this wasn’t a resume enhancement for.

He is a Democrat. Nothing to see here, move along.
Republican? Five alarms! Stop the presses. Above the NYT fold.

The democrat ironic moral standard:
For Thee, Not Me!

Golly, I’m old enough to remember when in-person mattress aerobics at the no-tell motel were required for an actual scandal. Apparently, this is the generation of soy-boi Femme pets. Sympathies to your wife, doood.

Leave the race?! This is the kind of scandal that gives a democrat street cred. He might as well have a campaign ad proclaiming his guilt.

If you look at Will|Long Island Patriot’s Tweet above, the picture of Cunningham on the right shows him wearing an Ambassador for NC BBQ apron.

By itself, this picture should disqualify Cunnigham from holding any political office in North Carolina. What an idiot.

#1) He’s using a gas grill. NC BBQ uses wood, dumb ass.
#2) The grill isn’t lit. Duh!
#3) Those buns appear to have been toasted in the over. Pul-eeze
#4) Dogs and burgers are NOT BBQ in North Carolina. How freakin’ tone-deaf can one man be?

And this dude’s from Winston Salem and went to Chapel Hill?

Ahh..those good ole campaigns! If yesterday were today, Dukakis’s infamous photo op but bogus campaign promotional of him in full military gear riding in 68 ton Battle Tank, not in any war zone but in Sterling Heights, Mich. we would be seeing the press doing for him then what their doing for Biden now or in this case Democrat Senator want to be Cunningham. Lies and Deceptions are how they roll.

The only time I visited Chapel Hill (admittedly a long time ago), there were Hare Krishna people dancing on the sidewalk.

I saw that pic, tiger66, and it’s even worse than you thought.

Even in kali we don’t call what he’s pretending to do BBQ. BBQ involves wood, not gas. And if you’re going to call it BBQ there better be a hog under that grill’s hood.

He could get away with calling it “grilling.” Sure, there’s nothing wrong with grilling some burgers. Steak would be better, but burgers are fine at a tailgate party. There is, though, something wrong with grilling dogs. This is why God invented Brats. Wassamatta, Southern Fried Anthony Weiner, couldn’t find Brats? I bet he never heard of Brats. He clearly never heard of BBQ. At least grill Brats, for the love of all that is holy.

The whole thing made me question whether this guy even lives in North Carolina on a regular basis but I looked up his bio and apparently he does. I therefore can’t explain this.

Again, it’s not BBQ and how much do you want to bet he’s not actually grilling? The Brioche rolls are a dead give away. The guy’s press secretary arranged a photo shoot. So they put out the props, he put on a costume, then stood next to his cold, cold, cold as ice gas grill for a few pics.

Then back inside to uncork the Chablis as “the help” prepares Pan Seared Halibut in a White Wine Reduction Sauce, sides of Champignons Poêlés and Glazed Carrot With Mint and Maldon, followed by a Tarragon Asparagus Salad with lemon vinaigrette, and an iced Malaysian Cendol for dessert.

A few random thoughts in no particular order about this perv and his party.

– The fact that he’s already received 320,000 votes makes him the poster child for “why early voting is a horrible idea.”

– “The first step in repairing those relationships is taking complete responsibility, which I do.” He’s an expert on the steps that someone needs to take to repair shattered relationships, eh? Sounds like he’s done this a lot.

– What the hell is wrong with these people?

I’m a New Yorker who went to grad school in Chapel Hill, worked in Memphis, and live in Texas. I know BBQ. That, senator, is not BBQ.

But, since he’s a Democrat, I guess I have to say:

The way the left goes after the spouses and children of conservative politicians, it would be fair-play of the right to hound Mrs. Cunningham for her statement about her husband’s behavior and how she feels about him. “Is your husband a serial adulterer, Mrs. Cunningham?” “Does he sext with you like he does the other woman?”

Friendship with “benefits”, not limited to casting couches, is a progressive class of secular polygamy.

I think it’s a mistake to exploit the sexual sins of opposing politicians (unless they involve pedophilia).
1. We are not filling pastoral positions. King David was a very effective leader in spite of his adultery and murderous coverup (not that murderous coverups are allowable).
2. We should consider the temptations of people who are in powerful, high stress positions, and be grateful we are not.
3. Piling on often backfires by generating sympathy. The impeachment of Bill Clinton was a huge mistake – probably motivated by the Borking of Justice Bork.
4. The politics of personal destruction is a “by any means necessary” tool of the left. Their view of human nature does not include forgiveness – even for the long dead.

If you sext wearing gloves, is that safe sex?

In some Democrat circles, this would be a resume enhancement.

I think Rush Limbaugh calls this a “resume enhancer for Democrats”