#GASen: Warnock Claims America Must ‘Repent’ For Trump, For ‘Worship of Whiteness’

#GASen: Warnock Claims America Must ‘Repent’ For Trump, For ‘Worship of Whiteness’ 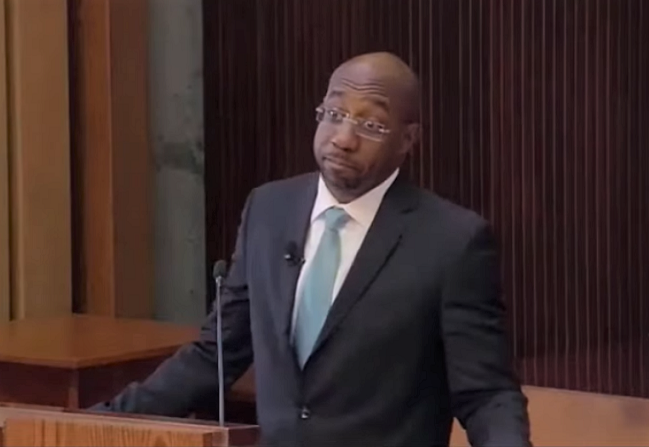 In addition to that, Warnock refers to police officers as “thugs” and “gangsters” among other shocking statements and stances.

As if that’s not all alarming enough, Warnock, in 2016, argued that America needs to “repent” for then-candidate Trump and for America’s “worship of whiteness.”

Georgia Democrat Raphael Warnock argued in late 2016 that Americans needed to “repent” both for supporting Donald Trump and for the country’s “worship of whiteness.”

The comments came in an address at Atlanta’s Candler School of Theology shortly before Trump defeated Hillary Clinton in the 2016 presidential election.

“If it is true that a man who has dominated the news and poisoned the discussion for months needs to repent, then it is doubly true that a nation that can produce such a man and make his vitriol go viral needs to repent,” Warnock said to raucous applause. “No matter what happens next month, more than a third of the nation that would go along with this, is reason to be afraid. America needs to repent for its worship of whiteness, on full display this season.”

Let him repent for fulfilling Fidel Castro’s evil desires in his church.

I find this sort of thing boring. He should shut his yap.

No, no, he should repeat this sort of thing on every TV and radio station in the state. Every night. Until the election.

He’ll get 90% of the black vote. If it’s so terrible here I’m sure a wealthy, well educated guy like him would do just fine in Rwanda.

I’ve been to Rwanda many times. They wouldn’t have him.

‘Reverend Raphael Warnock.’ A satanic cult has a reverend?

“Reverends” are the American substitute for the tribal chieftain. In place of the necklaces and fancy loincloths, they have the flashy suits, fake Rolex (or real ones), and expensive cars.

“Reverend” is not a title, and I’m sick of people (primarily in a certain ethnic group) who treat it as one. “The reverend” is an adjective, not a title, given as a courtesy to clergymen, like “the honorable” to various fringe nobility, politicians, judges, etc.

And this fellow, like Al Sharpton, Jesse Jackson, and others of that ilk, are not reverend, so they should be referred to as “the abhorrent”.

No, Milhouse.
In many Christian denominations (not all), you are ordained after undergoing written and oral examinations to prove you understand and and are orthodox to the specific doctrinal statement of faith.

It is (or can be) a very rigorous process.

It is not ‘given as a courtesy to clergymen, like “the honorable” to various fringe nobility, politicians, judges, etc.’

The title you are given when you are ordained is not “Reverend”. “The reverend” (always with the definite article) is a style, not a title. It is used exactly like “the honorable”. Except by the ignorant and illiterate.

They abuse the title as you say.

You know, I used to feel bad for you, as some people downvote you constantly.

You are a smart guy, but you are very arrogant.

My argument is that this is not true in all cases.

I dont care what Wikipedia says, in some cases this is comparative to Pastor. It depends on the denomination

In *some* denomination (I think some Presbyterian), pastors with a PhD still refer to themselves as “Dr Rev Smith”. Why would ANYONE use Reverend if it is honorary, if they have an earned Doctorate?

I’ll even concede that it has been used in an honorary sense. But it doesn’t have to be so

It’s not about the denomination, it’s about the Englisn language. “Reverend” is not a title. It just isn’t. It’s a style, like “honorable”. It’s an adjective used as a courtesy to describe the person. As such it is incorrect to use it without a definite article. And it should never be used of someone who isn’t reverend but is instead despicable. That is the correct adjective to use for such people.

Mocha, “reverend” is someone who doesn’t have a degree, and who may not be a pastor.

Valerie, “reverend” is an appropriate adjective to use for any clergyman, of any religion, with or without a degree. But it’s not a title. It’s not “Reverend Smith”, it’s “The Reverend Mr Smith”, or “The Reverend Dr Smith”, or whatever other title the person has. This isn’t a matter of religion, it’s a matter of correct English usage.

Is this worth arguing about?

I think you all should just get over the bickering around the semantics and just focus on the common ground that he is not deserving of any kind of reverence.

What written and oral examinations to prove understanding of the orthodoxy to the specific doctrinal statement of faith did a corrupt slob like Rev. Al Sharpton pass?

You mean the one where was licensed and ordained a Pentecostal minister at the age of NINE??
https://en.wikipedia.org/wiki/Al_Sharpton

Isn’t the Reverend Jessie Jackson “I’m going to cut his nuts off” a real reverend?

In my circles, the title is Pastor or Elder. Often, it’s Brother, plus the given name.

Or “Colonel” in the South.

Colonel is a title. It’s self-awarded, but it’s a title, not an adjective. The correct usage is “Colonel Smith”, not “the colonel Mr Smith”.

It should be so but at least according to https://www.lexico.com/definition/reverend it isn’t.

The main point of course: these race hucksters certainly are not reverend at all. They are dangerous and I find it offensive that they style themselves in a way that is intended to transfer Christian bona fides to their evil race baiting.

Lexico uses the term “title” incorrectly. Look at its own examples and usage guide, and you will see that it give the correct usage. “The traditionally correct form of address is the Reverend James Smith or the Reverend J. Smith, rather than Reverend Smith or simply Reverend.”

So will the Democrats repent of lying to the public for 4 years, while admitting they have no evidence of collusion when under oath?

They can build a case that Trump is a narcissist and acts “unpresidential”, yet he was duly elected and they tried to undo all that through lies.

I find no biblical text to justify that.

It’s in the Don King Rick James version of the bible, in the book of Heywood Jablome 6:9.

We’re done. We don’t care anymore. He can scream and complain and slander all he wants. Americans have done more for blacks than anyone else in the world would have been willing to do, and we’ve received only hateful abuse for our generosity and altruism. To hell with that. No more.

We wish the best for everyone, regardless of race, religion, etc., but we didn’t cause their failures and it’s not our job to fix them.

We’ve done too much. Affirmative action, sets sides, race-normed tests, and a government that grovels when they threaten or whine. Welfare for generations.

Kick them out of the nest. Sink or swim.

We’ve done too much of the wrong thing. DJT did the experiment by bringing jobs back to the country. Black unemployment and crime went down. Blacks, on the whole, prefer work to crime.

And look who’s running BLM and rioting in the name of blacks and burning black-owned businesses.

I am afraid this will resonate in the ghettos of Atlanta. Surely one of the more depraved places on the planet.

The man’s black. This rhetoric is not going to earn him one additional vote over what his color already guaranteed him. If anything, it’s going to lose him black voters who #Walkedaway.

I hope that it loses him a LOT of Black votes ! This man spews POISON, and I hope that most of the Black voters DON’T drink his poison !

Warnock seems to worship blackness, but I guess that’s different.

He expects everyone else to as well.

This weasel is projecting, witness “BLM”.

Fear these people: they have genocide on their minds. Ours.

I didn’t think Jeremiah Wright has a mission station in Atlanta…or are Black Muslims the mAjority in Georgia?

I am getting so tired of these black supremacists spewing their racist nonsense every day. No, Reverend Warnock, it you who needs to repent for your racism against whites. You are sowing hatred, not us.

You, sir, need to repent for wasting so much of our time with your anti-Semitic leftist bullshit. Now sit the F down.

Pretty sure he should just ‘flat out’ repent…

I don’t think he would come up here to the north Georgia mountains and campaign with that mouth.

If elected, he will be not a senator from Georgia, but a senator for Atlanta and Savanna.

a man who has … poisoned the discussion for months needs to repent
So, you’re going to repent?

You, sir, are an anti-Christ. That you are not at least pitched out from your pulpit is a shame and a disgrace to your congregation (who claim the name of Christ).

Worship of whiteness. Right. We the see the evidence of that every single day. Look at how the evil members of white America have benefited from affirmative action, racial quotas, identity politics and myriad of other race-based incentive programs.

The real reason not to vote for Warnock is because he is either a sociopathic liar or delusional. Either should be enough to disqualify him from being elected.

Time to mobilize the clergy against this son of Satan. They should visit black churches and social events giving sermons and pointing out how racism of all types is the work of Satan. This includes racism against whites.

He is making campaign appearances with the Democratic candidate for the other Senate seat, Jon Ossoff.. I wonder if he realizes that Ossoff is Jewish?..Oh, wait, maybe Ossoff doesn’t know that about himself.

A typical piece of Demorat scum–if elected he would be a true ally of the fraud Schumer, who pretends to be defender of Isreal and the Jewish people.

I just hope that Democratic identity politics blows up in their feces–oops, faces–in 2022 and 2024. I don’t think we need to turn our history into hagiography of anyone; but I don’t think it’s all negative. When all the book are open, we’ll probably find there are not a few blacks who are here because some West African ruler decided he needed rum, calico, guns, and better iron tools than his dead ancestors needed human blood (while I sympathize far more with those who wrestled against slavery than with its defenders; and have some pride in a distant relative who signed onto a Weisconsin regiment to end it, and got his leg shot off for his trouble).

Who the f—worships whiteness? I, for one, take the Decalogue very seriously.

The guy is nothing more than a throwback to the suffocating sixties. Intellectually vacuous.

Hey Rev; you got a soul; weightless, odorless, indivisible odorless, immaterial, immortal, eternal. Everybody has one.

The soul is the form of the body. Prior to. More important. Everything else is parentally accidental. You should know.

It’s not that color isn’t important. It’s just that ignorant people of all colors see it first and as more important than the common human nature, soul and body God gives us all. You messed up!

It’s a credit to his campaign team that his TV ads make him look so natural and honest, I’m even tempted to vote for him. Pretty astonishing what you see when you take a closer look at him.