“has for years been one of the most vocal defenders of Wright’s infamous 2003 ‘God Damn America’ sermon, which compared U.S. leaders to al Qaeda and claimed HIV was invented by the government as a way to kill black people” 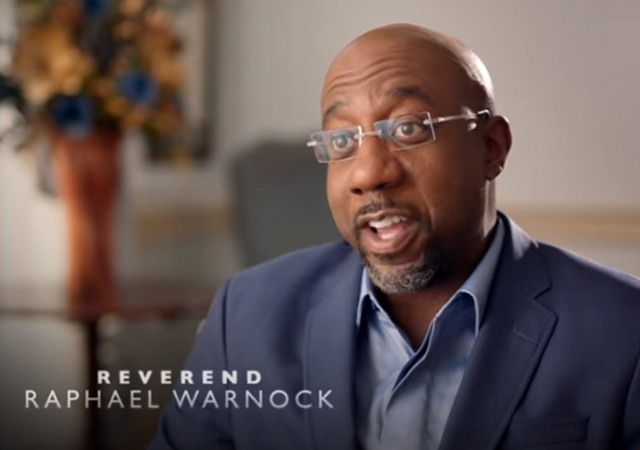 In the coming months, all eyes will be on Georgia for the run-off elections happening there in January which will impact party control of the U.S. Senate.

Democratic Senate candidate Raphael Warnock’s longtime support for anti-Semitic, America-bashing pastor Rev. Jeremiah Wright is drawing new scrutiny in the Georgia runoff election, as the candidate attempts to walk back his own prior criticism of Israel.

Warnock, the senior pastor at Ebenezer Baptist Church in Atlanta, has for years been one of the most vocal defenders of Wright’s infamous 2003 “God Damn America” sermon, which compared U.S. leaders to al Qaeda and claimed HIV was invented by the government as a way to kill black people.

The Democratic candidate “is expected to face negative ads that target his ties to Jeremiah Wright,” Politico reported on Tuesday. Warnock’s opponent, Republican senator Kelly Loeffler, also highlighted his support for Wright in a statement this week.

Warnock seems to have much in common with the Squad.

Senator Tom Cotton points out another inconvenient story for Warnock:

In 2002, when the police investigated suspected child abuse at Raphael Warnock's church camp for children, Warnock was arrested for obstructing the investigation.

Will the media ask Raphael Warnock why he interfered with the police investigation?https://t.co/oW4uMwtzmI

If a Republican helped run a camp for children that was investigated for child abuse—and then was arrested for trying to block the investigation—the media would be asking a lot of questions.

One of Warnock’s senior advisers is also an apparent advocate of defunding police.

Warnock Senior Adviser: Nothing Radical About ‘Defund the Police’

A senior adviser to Georgia Democratic Senate candidate Raphael Warnock has said defunding the police is not a radical policy.

“The movement to defund the police isn’t as radical as some may think,” Ruffin tweeted. “It’s about a complete reimagining of law enforcement in the United States.”

Must read from my sister-in-service ⁦@paigejfernandez⁩. The movement to defund the police isn’t as radical as some may think. It’s about a complete reimagining of law enforcement in the United States. https://t.co/1t8WWupOXO

Massive amounts of money will flow into Georgia in the coming months. Republicans must pull out all the stops to make sure they retain control of the Senate.

notamemberofanyorganizedpolicital in reply to The Friendly Grizzly. | November 12, 2020 at 4:00 pm

DEMS insist on digging themselves deeper and deeper.

OH! China is their goal.

Hey, how did this get left out of the article?

True story, 25 years ago he was a pastor at a church in New York that invited Fidel Castro to speak,” Rubio said. “They cheered him wildly. … Think about that, now 25 years later, one of the pastors from that church wants to be the U.S. senator from Georgia.”

The only thing that could drag this guy over the finish line of victory is voter fraud. Which means epic levels of democrat is inbound.

Isn’t that what AOC and “the Governor” Stacey Abrams are planning?

notamemberofanyorganizedpolicital in reply to Ghost Rider. | November 12, 2020 at 4:01 pm

They are so stupid, but I’m glad they are making as public
donkey of themselves on record.

If Warnock is even half of what’s reported above, how did he even make it to a runoff?

Because he is a corrupt black preacher supported by other crooked black preachers and can garner the support of black dog Democrats. They would vote for a black dog if it were running against a white candidate.

I should add a comment about the corruption of black preachers and the Dem party. Dems pretend to be in favor of separation of church and state until it is election time, and then they cannot commingle enough. The way the racket works is the Dems deliver bags of cash to the preachers, the NAACP, and other entities to distribute as “walking around money” to get the black vote to turn out at the polls. They ones distributing it get paid for their troubles.

Being a black minister is not only a position of authority, it is also a way to meet women and make big money.

I learned the foregoing from former candidates for political office that were in the solicitation and bidding process for the delivery of the black vote.

People who vote based on race.

Because, to most voters, qualifications and character are unimportant. They simply ask “To which tribe does he belong?” Hence, the likelihood of, God help us, President Biden, a corrupt, addled loser who has been on the take for much of his 10,000 years in government. But he’s on Team D, so half the country is willing to vote for him.

With weaklings like Mittens, Susan Collins, and Lisa Murkowski in the Senate, it is imperative that this clown be defeated.

WTF is wrong with Georgia?!!

notamemberofanyorganizedpolicital in reply to captmike. | November 12, 2020 at 4:02 pm

General Sherman needs to make a 2nd march to the sea……

Plus all the yankee transplants and illegal aliens that also vote for Democrats.

notamemberofanyorganizedpolicital in reply to OleDirtyBarrister. | November 12, 2020 at 5:48 pm

Defunding the police isn’t “radical,” yet it requires “complete reimagining” of law enforcement.

I think that qualifies as “radical” in contemporary usage, twit.

This is the kind of thing you find when you VET your candidate rather than vote because your party told you to.

Another vicious, despicable, Jew-hating and jihad-enabling/whitewashing/rationalizing Dhimmi-crat. What else is new?

That no one in the Dhimmi-crat Party thought it at all problematic to select a transparent, Jew-hating bigot as their Georgia nominee for the U.S. Senate confirms what we already knew to be true — the contemporary Dhimmi-crat Party is the biggest supporter of Jew-hate, outside of Muslim jihadists.

Obama held the same basic worldview and was elected to the Senate. Though that was in Illinois not Georgia and this guy’s flaws/OPPO research will be covered prior to election unlike Obama.

Also Jeri Ryan isn’t divorcing either r Candidate so, as far as we know now, neither r candidate has huge last minute dirty trick skeleton to bring out before January.

And progressive Democrats champion this guy, not to mention Hunter’s enabler, as a model.

you can take the rat out of the hood……

Think about Rev. Wright, and think about what he kind of powerful white people he knows. Think about where he lives (Chicago) and the white politicians he is yoked with in the Democrat Party.

After that mental exercise, tell me whether he was really wrong.

No, urban black neighborhoods and abortion clinics were invented as a way for black people to kill other black people. And those have the blessing of most black voters.

Just what America does NOT need, another leftist in the US Senate who HATES America.