“So everyone out there please stop fighting. We can’t beat it that way.” 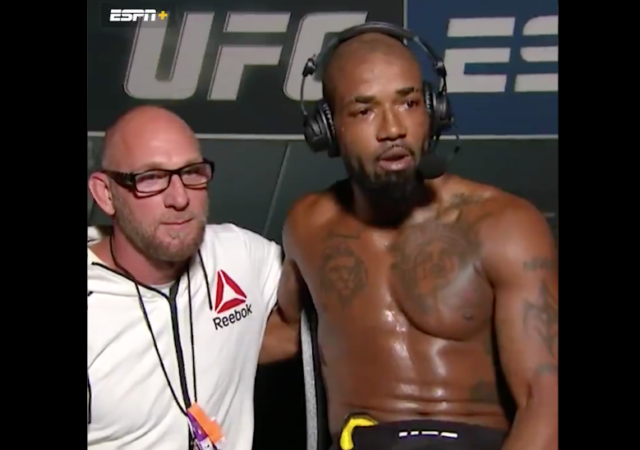 During a post-fight press conference, UFC Fighter Bobby Green spoke out against rioting and implored people to love one another.

“We’ve been fighting right now at this time in our country. We’re doing this whole Black Lives Matter. Everyone is fighting. This is my father. I was born in foster care. I didn’t have a mother or father. They gave me away. My father wasn’t fit to be my father. This is my dad right here.

He’s been here since the beginning. He’s done everything. He would lay his life down for me and I would lay my life down for him. I don’t judge any man by the color of their skin but by the content of their character.

This. This is every interracial family in America. Every friendship across color lines. Every employer who hired an employee who she respects even with opposite politics.

Stop telling us how much our parents & brothers and co-workers hate us.
It’s untrue:pic.twitter.com/qk7fCWetXN

Green had a rather tough upbringing. He was a foster kid from a very tender age. The fact that he lived in the rough neighborhoods of Southern California’s Inland Empire didn’t help either. When he was five, his biological mother gave him and his siblings to the state. Life took a lot of turns for Green before he finally ended with coach Jake Behney in Pinnacle Mixed Martial Arts in Redlands.

Behney has had such a powerful influence on Green that the UFC Lightweight considers him as a father figure. Green used the fact that an African American like him considers a white man as his father to show that love transcends color. He used it to pass on a message regarding the ongoing protests in the nation.

This is literally Dr. King’s message. One of my absolute favorite sermons given by Dr. King implored us to always “fight with love” as love is a transformative, redemptive power.

This is my family as well. ❤️❤️

Did the left run a candidate that aid pretty much that and got her back side handed to her?

patriots love their country, their freedom, their rights–they live and work for something greater than themselves

though the Almighty commands us to love thine enemies, He is divine–i am only a man

It’s like Reverend Martin Luther King Jr. never existed. That is a travesty.

It’s not so much that as, Jesse Jackson, Al Sharpton, Reverend Wright, and wannabes like Shaun King DO exist.