In whatever manner you live, or fight, or deal with others, may you always operate in love. 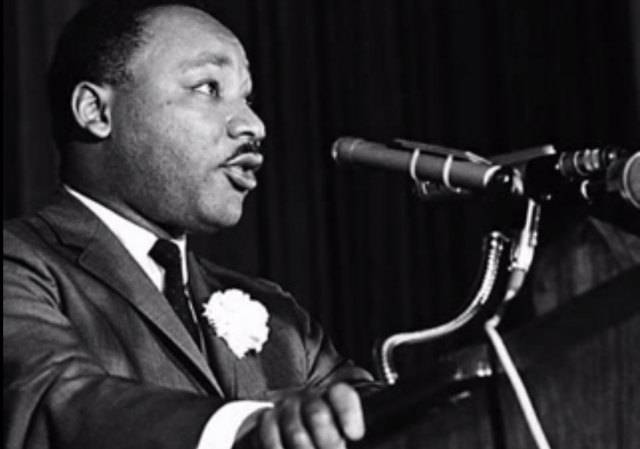 In 1983, President Reagan signed Martin Luther King, Jr. day into law. Even so, it wasn’t until 2000 that all states observed the day as intended. 2000. That’s… incredible.

So called ‘controversial figures’ are always difficult to discuss. Regardless of what I write, someone, many even, will inevitably comment about King’s shortcomings, his failures, maybe even his alleged infidelities. Yet none of those things detract from what Dr. King accomplished on the civil rights front nor the legacy of hope he left behind.

God how I wish he were here today. I’ve often wondered if we would’ve been spared the pestilence of the Sharpton’s and Jackson’s of this world had Dr. King survived.

So abundant are King’s words of wisdom; the truths he left with us, that it’s always hard to pick one. So this Martin Luther, King, Jr. Day, I pick love.

Dr. King helped organized and plan the Montgomery bus boycott. Rather than lambast the opposition, King had this to say:

“Let us fight passionately and unrelentingly to the goals of justice. Let’s be sure that our hands are clean Let us never fight with falsehood and violence and hate and malice, but always fight with love so that when the day comes and the walls of segregation are completely crumbled in Montgomery, we will be able to live with people as brothers.”

“Love is the only creative, redemptive, transforming, power in the universe,” he said:

The compulsion to respond to hate with hate will always exist, but is that the legacy we want to leave for our children, for future generations?

In all you do, in every way, may you find the grace to choose love.

Of all the things said about MLK Jr. over the years, good and bad, his strong Christianity is almost never brought up – and yet that was the source of *all* of his positions, including the one discussed in this post. I think this has always been a problem for his opponents – in his lifetime, the segregationists who opposed him, and today, the radical left who have become the new segregationists, and who hate Christianity absolutely.

But first and foremost, and as he often said himself, MLK Jr. was a Christian who advocated for Christian ideals. (and who pointed out the hypocrisy of many so-called Christians) Did he have flaws? Of course, it has been said that all Great Men have Great Flaws. But that doesn’t make his message wrong.

notamemberofanyorganizedpolicital in reply to Tom Servo. | January 20, 2020 at 12:51 pm

Another salient fact of MLK Jr.’s life (totally ignored by the Propaganda Media) is that he was…..

A LIFE LONG, PROUD MEMBER OF THE REPUBLICAN PARTY!
(until a Democrat shot him dead…)

Milhouse in reply to notamemberofanyorganizedpolicital. | January 20, 2020 at 3:01 pm

No, he wasn’t. He was not a member of either party, and criticized them both. He never endorsed political candidates of either party, but he denounced the best candidate the Republicans ever put up, Barry Goldwater, and called on everyone to vote against him.

Progressive fascists want people judged by the color of their skin. They are the new racists.

it took a great deal of courage in his day to proclaim his message in the face of so much ignorance and hatred–his faith was never criticized by his adversaries as it was evident to all that he was a devout christian–he was human of course but his strength came from another place–his convictions were unshakeable–he was able to turn the other cheek repeatedly in the belief that love(or honor, a higher form)would ultimately prevail and it is for that i respect him the most

in my own life, have very rarely been able to match that strength

Flaws are one thing. Encouraging rape is very much another thing. And this was “rape rape”, as Whoopi Goldberg called it, or “legitimate rape” to use Todd Akin’s term.

I’ve long believed some of the things that have been said about MLK’s infidelities. After all, I saw it in Bill Clinton and read about Ben Franklin.

But after the Kavanaugh debacle, I have to wonder about that rape allegation.

“Someday my children will be judged by the content of their character. Rather than , the color of their skin” – Martin Luther King

Why will the Gentile and the Jew say free at last? They’re freed from their prejudice.

Ordinary Christian message. I think MLK got it from Tillich mostly.

Candor originally meant seeing only the good in people, rather than the bad. E.g.

“Affectation of candour is common enough—one meets with it everywhere. But to be candid without ostentation or design — to take the good of everybody’s character and make it still better, and say nothing of the bad — belongs to you alone.”