“Security for me but not for thee.” 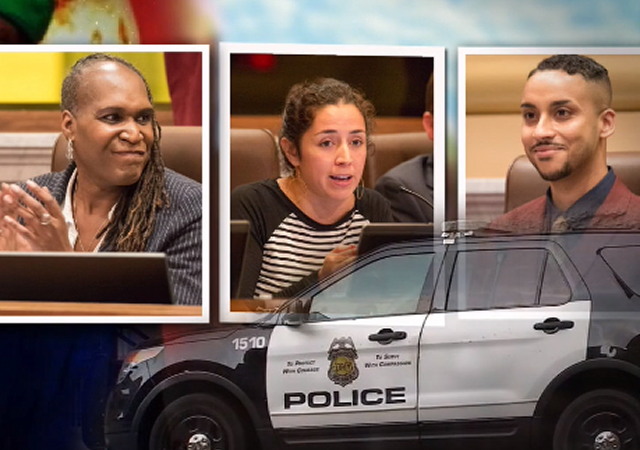 The City Council of Minneapolis recently voted unanimously to defund the city’s police department. Now certain members of the council claim they are getting threats, so they have been given private security.

The City of Minneapolis is spending $4,500 a day for private security for three council members who have received threats following the police killing of George Floyd, FOX 9 has learned.

A city spokesperson said the private security details have cost taxpayers $63,000 over the past three weeks.

The three council members who have the security detail – Andrea Jenkins (Ward 8), and Phillipe Cunningham (Ward 4), and Alondra Cano (Ward 9)– have been outspoken proponents of defunding the Minneapolis Police Department.

“I don’t feel comfortable publicly discussing the death threats against me or the level of security I currently have protecting me from those threats,” said Cunningham in a text message.

Mary Kay Linge of the New York Post has more:

Security for me but not for thee.

Three members of the Minneapolis City Council who voted to eliminate the local police force are being protected by a private security detail that costs taxpayers $4,500 a day.

News of the arrangement broke Friday, the same day that the council voted 12-0 to abolish the Minneapolis Police Department in the wake of the killing of George Floyd.

“My concern is the large number of white nationalist(s) in our city and other threatening communications I’ve been receiving,” Councilmember Andrea Jenkins told Fox 9 News — adding that she had been asking for private security ever since she took office in 2018.

Twitchy has rounded up some reactions to this news:

Minneapolis politicians who want to "defund the police" at a time when people are feeling unsafe in the city now have city-funded "private security." Sounds about right. Protection for people in power while average citizens are left vulnerable. When are people going to wake up?? https://t.co/4jNvyWGmpc

The same clowns that voted to disband the Minneapolis police force have hired private security companies to look after them. They can afford to. You can't. https://t.co/CnBrjomK7Q

This was my reaction:

City council members who voted to disband the police department now have private taxpayer funded security. Where have we seen this before? pic.twitter.com/zGWsjHeO9D

Yah and next they will ban the sale of guns so people don’t hurt the “protestors” when they come to their business or home to loot, destroy and burn. The people of MN elected these “leaders”. I hope they enjoy the “progress”.

Maybe the public will get together and issue a bounty for these city council members, dead or alive, 10 x higher for dead.

It is amazing that they vote to defund police and then squander taxpayer money for their own security. Will the public wise up and recall these POS?

notamemberofanyorganizedpolicital in reply to JusticeDelivered. | June 28, 2020 at 1:31 pm

That adds up to more than 1/2 Million Dollars a year.

This lays out all the DEMS plans. Well worth the read.

The Left Craps Out

“….To the panic, hysteria, and callousness of COVID we can add the gibbering idiocy of the current Dem leadership. Jay “What, me worry?” Insby had to take refuge in willful ignorance. Mayor Jenny Durkan burbled on about “street festivals” and the “summer of love.” Mayor Jacob Frey of Minneapolis whimpered like a small child, while Chicago’s Lori Lightfoot, a true Dem superstar, being black, female, and lesbian, was revealed as nothing more than a petulant, foulmouthed harridan. The American Left collapsed in the face of both great crises of 2020, and furthermore, they were seen to fail.

–or hurt any sort of criminal: “he was turning his life around!”

In Minneapolis???? Surely you jest. The Democrat/Socialists in Minnesota all agree that the protection of the Party Nomenklatura and the suppression of subversives outweigh all other considerations.

This is what privilege looks like… Lord Acton, call yer office.

notamemberofanyorganizedpolicital in reply to locomotivebreath1901. | June 28, 2020 at 1:38 pm

The councilmen are RACIST.

Well, THEY were always too important to be in danger of being hunted down and murdered by insane racist cops, anyway. Defunding the police gives them no benefit. So it all evens out in the end.

Don’t you stupid plebes understand that?

I have little sympathy for the citizens of Minneapolis. The majority voted for the members of the council and now have to live with the consequences. I doubt the next election will change anything.

“I doubt the next election will change anything”

No, I think they’ll be changing the City’s anthem. To one more in tune (good pun, huh?),

“The majority voted for”

Has the majority learned that they need to dump Dems, or will it take more riots, more Muslim rapes?

Is Milwaukee going to continue to slide further into shit hole status?

Welcome to your future.

Welcome to your future.

“Now certain members of the council claim they are getting threats, so they have been given private security”

But a mob of raging lunatics, burning down your business and threatening to destroy your way of life isn’t a “threat?”

I hope you realize that most of those people are to ignorant to understand this reference.

No doubt this is just another way of fleecing the taxpayers, i am certain it was a no bid contract to political cronies.

BabyLivesMatter? Retributive change for a century of social progress and social justice. No!!!! They’re so cute and adorable. I was once one of them. Change. I don’t believe it. Insidious little clusters of cells brandishing their digits and umbilical chords.

Minneapolis needs police … but I fear it might not be long until the officers currently there flip the city council the “blue bird”, seek employment elsewhere and leave them in the lurch. In which case a handful of security guards ain’t gonna cut it.

Wait, this comes as a surprise to people? People want security, for themselves and their families. That is universal. When that security is removed, or is perceived to have been removed, then people will pay for their own security, if they can afford it. That is why we have a thriving private security industry in this country.

Now, politicians. Politicians have two universal desires. The first is the overwhelming desire for their own army. They all, without exception, deeply desire the means to threaten and coerce the peasantry [aka their constituents]. The second thing that they desire is personal security. The most laughable thing about these desires is that overwhelmingly, the politicians do not believe that they face any real personal threat.

Now, in Minneapolis, the politicians have created a problem for themselves. They have to present themselves in a positive light. And, in today’s society, they have to appear as victims. But, their stance on the local police has alienated that organization and, by painting the MPD as incompetent and dangerous, they can not get a protective entourage from the agency. So, they have to hire one. And, to make sure that everyone “knows” that they are victims, in need of special protection, they have to tell everyone about it and flaunt their personal security. “Look at how important I am!!!”

Morning Answer
@
More children have been shot and killed in Chicago in the last 2 weeks than have died from COVID. Shame on you,
@chicagosmayor
and
@GovPritzker
. All of the virtue signaling and memes won’t stop the violence.

CBS Chicago
@
BREAKING: A 1-year-old girl has been shot and killed in the Englewood neighborhood, a police source confirmed. https://cbsloc.al/2BILdGv

Kash Jackson
@
This weekend another 2 kids were murdered in Chicago. This time one of them was a 1 year old and the other a 10 year old. If you’re done seeing children dying call Lori Lightfoot REPEATEDLY until she does something

@chicagosmayor
You made the
@Chicago_Police
stand down during the riots while Chicago was being pillaged and burned. You were to afraid to let them do their job but at the same time had about 50 officers guarding your house while leaving all Chicagoans to fend for themselves. You make me sick..

Kash Jackson
@
Remember when J.B. Pritzker’s Gubernatorial Campaign was sued by ten of its own staffers for racial discrimination?

I wonder if any of those “threats” are being investigated by the feds?

The bigots, you say.

which two are the women ?

LOL. I was trying to figure out the one on the left.

You’d think that they’d be more concerned about all the white nationalists in their city going on a rampage after the Police are abolished. That doesn’t seem to worry them much.

I can’t see these tards making it to the end of the year without getting capped. Then they’ll be on 911 screaming for the cops. Eff them.