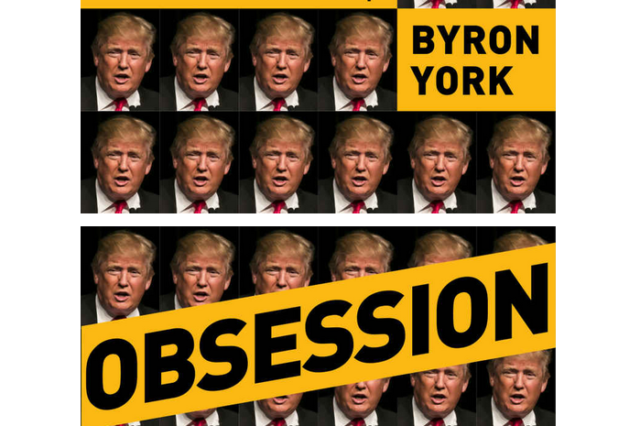 Clearly the left has plans to release a series of books to hurt President Donald Trump’s reelection chances. The most recent example is Bob Woodward’s widely-cited “Rage” that has suddenly vanished off the radar after Trump’s statements on the pandemic were shown to be a nothing-burger.

Conservatives have also been releasing their own coverage of the Trump presidency, which will be less promoted but are much more accurate. For example, well-known columnist and chief political correspondent for the Washington Examiner Byron York has just published his new book: Obsession – Inside the Washington Establishment’s Never-Ending War on Trump.

Given the likely political upheaval in the wake of Supreme Court Justice Ruth Bader Ginsburg’s death, the timing seems karmic.

In his latest work, York reviews in detail the extreme behavior of the Democrats that was evident even before Trump took office, chronicling SpyGate, RussiaGate, UkraineGate, and concluding with an analysis of the impeachment hearings. York’s manages to walk the fine line between politically informative and entertaining with the skill of a mountain goat (e.g., his description of the antics of Congressman Adam Schiff during the impeachment process).

I have one quibble with York. There were several times in the book he assumed a motivation that Trump had, or he assumed Trump was ignorant of some key aspect that a political insider would know. That was disconcerting, because I suspect the president is a more informed and shrewdly tactical leader than anybody in Washington has seen in quite some time.

The writing is certainly solid, which you would expect from a veteran Washington pundit. However, there were two outstanding aspects of “Obsession” that must be highlighted in this review.

Firstly, York brings to life incidents after Trump’s election, but before his inauguration, that should be studied by those anticipating Democratic Party chicanery during and after the November 3rd election. When the 2016 electors were called in for their official vote, several Democrats attempted to hijack the process by using arcane electoral college rules.

Interestingly, Vice President Joe Biden was the one who put a stop to the silliness.

“The gentlewoman will suspend,” Biden said, before reading the rules one more time. Another bang of the gavel and the count moved on.

Democrats interrupted the proceeding five more times, including when Barbara Lee objected “on behalf of the millions of Americans, including members of the Intelligence Community, who are horrified by evidence that the Russians interfered in our election.”

The process took far longer than necessary, but finally ended when Trump, with 304 electoral votes, was declared president.

“The purpose of this joint session having been concluded,” Biden said with a little weary laugh, “the chair declares the joint session dissolved.” As Republicans applauded, Biden turned to shake Ryan’s hand and said, “God save the Queen.” It was unclear precisely what he meant, but it seemed to be a mild joke to ease the tension of one of the strangest Electoral College certifications ever.

What had the day meant? For many Americans, it didn’t even make the news. But for some GOP lawmakers, it was a disconcerting experience. They had no idea what was coming in the months and years ahead, but the anger and vehemence they saw on the Democratic side disquieted them.’

Secondly, York’s style brings readers right into the scene, as if they were watching events unfold. For example, this passage when Trump’s lead counsel in the special counsel investigation into Russian election, John Dowd, realized Robert Mueller was not going to rest until his team caught the President in a perjury trap.

“There came a time when Bob said, ‘You know, John, we can always get a grand jury subpoena,’” Dowd recalled. A subpoena, which would inevitably lead to a titanic battle in the Supreme Court over whether Mueller had the authority to compel Trump’s testimony, would be the Mueller investigation version of going nuclear.

“That was it for me,” Dowd recalled. “I hit the table with my hands and I stood up and I said, ‘Bring it on. Let’s go. I can’t wait to move to quash that damn thing. We’ll take it all the way to the Supreme Court, and I want to hear you tell the district judge what the question is that you haven’t answered. We’re going to give the district judge copies of everything we gave you. Go ahead, pal.’ I was really pissed.

“I said, ‘Look, what basis do you have to do it?’” Dowd continued. “‘We’re not afraid of a grand jury subpoena. You want to do it, you’ve got yourself a war, and you’re going to lose it.’”

“He said, ‘John, take it easy, calm down,’” Dowd remembered. “I said, ‘Look, you just threatened the President of the United States with a grand jury subpoena. Up to this time we’ve been operating on a goddamn handshake. It was a great fucking relationship.’” That period of trust, Dowd said, was clearly over.

Cooling down, Dowd suggested to Mueller that they go over the evidence on obstruction. “He said, ‘John, I’m going to have to go back and look at all that,’” Dowd recalled Mueller saying. “I said, ‘Are you telling me that you’re in this meeting and you’re not prepared to discuss the case about the President of the United States? Is that what you’re telling me, Bob Mueller?’ I didn’t get an answer to that. He was purple in the face. It was such bullshit.

In conclusion, I give the book 4.5 stars out of 5. It’s a solid piece for any conservative political geek, worthwhile to have if the Durham inspection brings down any indictments soon, and the early chapters might be a useful roadmap for those who want to develop a post-election strategy involving the Electoral College.

I believe that the ugliness we’ve seen before now is just a preview of worse to come.

It is unclear that Biden will still be the nominee on election night. The “Harris – Biden” ticket stuff this week could well be a subliminal play to start prepping the public for his departure from the ticket:

1) He could pass away from the (Arkanicide strain) of Covid. This would give the DNC plausible means for naming a new Presidential or Vice-Presidential nominee, while helping to maintain the “we need universal mail in ballots because of Covid” fraud.

2) Ukraine disclosures could prompt him to “bow out” for “the good of the Party” / “good of the country” even as he maintained his innocence.

The bottom line is that he’s becoming such a liability the the Democrats / Progressives may well replace him “by any means necessary.”

Also, while it is clear they intend to cheat and steal the election — consider that their “Plan B” could be don’t concede NO MATTER the scale of a Trump landslide, but delay long enough to get it into the House of Representatives ( https://jonathanturley.org/2020/08/03/blood-chilling-or-just-a-tweet-debunking-the-coup-dtrump/ ).

If the American public is educated about the signs signaling what they are plotting, the harder it will be for them to pull it off. I’m including some links below that well-illustrate their plans. IT’S CHILLING.

May I humbly demand that everyone reading this read the links below!!

We are in the midst of a “top down – bottom up” / “color revolution.” Our citizens need to know!

Notice the number of cities Antifa and BLM burned to the ground recently.

And notice that treasonous rat Christopher Wray claiming :Russian meddling” “white supremacists” are what is threatening the US.
https://www.wsj.com/articles/fbi-director-flags-worries-over-russian-election-meddling-white-supremacists-11600383590

Notice AG Barr has not fired this piece of garbage. Says wonders about Barr.

Bob Woodward is the man who conducted an interview with the late CIA Director William Casey while Casey was in a coma. Carl Bernstein earns his John Dean like living saying its’ “worse than Watergate”. A shining example of diminishing your own work for fast cash.

People this scared have a a lot to hide.

I love watching TDS suffers get more and more frustrated, especially when much of it is driven one tweet at a time. They are so irrational and petty.

All I needed to know about Mueller was his disastrous testimony before the House when he said, under oath, that he had no idea who Fusion GPS was.