Violence in Portland Still Rages With No Fed Involvement

Violence in Portland Still Rages With No Fed Involvement

Remember when state and city officials said the only reason for violence was the actions of federal law enforcement? 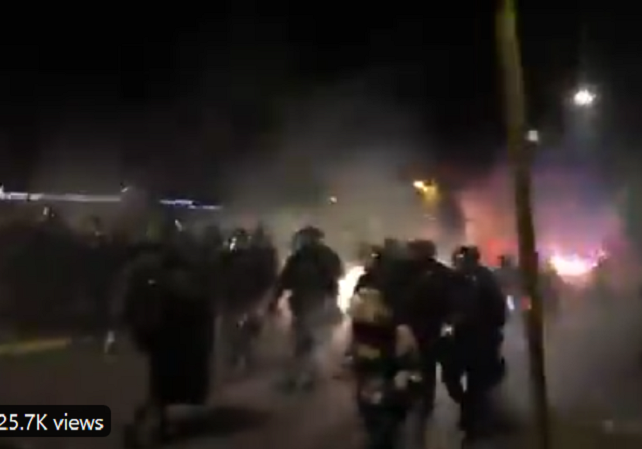 Portland, Oregon has long been a hotspot of antifa violence, and that has only intensified in the months since the George Floyd protests began and were quickly turned into widespread riots, looting, arson, vandalism, and murder.

The situation became so bad that the Department of Homeland Security sent in federal law enforcement to protect federal property, particularly a federal courthouse that antifa and its cohorts in BLM were vandalizing and attempting to torch.

Instantly, the leftist narrative became that the violence in Portland was simply a reasonable reaction to “Trump’s stormtroopers.”  And/or that Portland antifa violence was a “myth.”

Absolutely no one believed that for one second.  Not the right, not the left, certainly not antifa and BLM who were well aware of their activities prior to the arrival of federal officers, but the lie kept getting told and retold.

So what happens when the federal law enforcement agrees to leaves Portland?  Yep.  More rioting, looting, arson, and mayhem.

A riot has been declared outside East Precinct. You are ordered to disperse to the north immediately.

Overnight on 5–6 Aug, another riot was declared by Portland Police after #antifa tried to break into the east precinct (far from downtown). They barricaded & set fire to the front of the building. One of the rioters tried to run over officers using a truck https://t.co/Fr4gcgMvRj pic.twitter.com/XtZ2909APV

More evidence of antifa at the riots in Portland. Beeman was actually part of the organized antifa “street medic” unit. As usual, this will be ignored by the media. https://t.co/mq8tFH0QjJ

Antifa rioters came prepared for battle in east Portland last night. After police dispersed them following the arson attack on the east precinct, they kept trying to return to attack some more. Their comrades in cars blocked police. #antifa #PortlandRiots pic.twitter.com/1EDFA0zsGv

Antifa slash the tires of a truck on the street where they are rioting. The driver drives off. They chase him down and smash up his vehicle. In June they did this to another driver during broad daylight in SE Portland. #PortlandRiots #antifa pic.twitter.com/VB2TGe5qLU

“Portlanders need to send a strong message that enough is enough,” Lovell told reporters at Tom McCall Waterfront Park, according to KGW-TV in Portland. “This is not forwarding the goals that are going to lead to better outcomes for people of color. This movement is really powerful, but the violence has taken away from it. … This is not what Portland is about. This is not what we need in our city.”

The protests, which have sometimes turned into late-night riots focused on the Multnomah County Justice Center and the federal courthouse, have continued unabated for more than two months since the May 25 death of George Floyd in police custody in Minneapolis.

Lovell said there have been many large peaceful protests that required no police presence but the smaller offshoot actions — setting fires, breaking windows and throwing objects at police — are taking away from the larger message.

Late Wednesday, Portland police declared a riot and said they believe an explosive device had been left outside a precinct. People were ordered to disperse, and some streets were closed.

. . . . Downtown protests have become more peaceful since federal officers agreed to leave last week, so some instigators have moved to other police buildings across the city to cause problems.

Early Wednesday, police had declared a riot and made three arrests after saying demonstrators set fires, erected barricades in a street and broke into the police union headquarters. Police said someone also fired a gun during the unrest and a pickup truck accelerated into the crowd while pushing an unoccupied motorcycle in front of it.

“As a Black man and a public servant, I see that spectacle is drowning out the voices that need to be heard to make positive change,” he wrote. “This violence is doing nothing to further the Black Lives Matter movement.”

Here’s a thought, instead of begging the instigators to stop instigating violence, how about arresting them?  One by one, just get them off the streets. Repeat until law and order is restored.

Feds being there implies riots.

The expanded form is (there are riots) OR (no Feds are there).

That’s always true if there are always riots, regardless of the second clause.

notamemberofanyorganizedpolicital in reply to rhhardin. | August 7, 2020 at 12:56 pm

Those are not peaceful Democratic Party riots and murders?

For the LORD your God is he that goeth with you, to fight for you against your enemies, to save you.

Won’t work. “They have rights!” (The left thinks that means “the right to do whatever they want with impunity”.)

Just another fabulous myth according to Humpty Dumpty Nadler

The Chief of Police thinking this is all about improving the lot of the citizens of color in Portlandia is the first reason this situation is out of control and will not stop on its own.

I really think that the only way to deal with this is lead and various forms of shrapnel.

“Here’s a thought, instead of begging the instigators to stop instigating violence, how about arresting them? One by one, just get them off the streets. Repeat until law and order is restored.”

I expect the Chief’s remarks were intended to build political support for that approach. These nightly disturbances are allowed to continue due to the general public’s sympathy for the rioters.

Maybe the Marines should take a crack at it.

You don’t think responsibility for maintaining law and order in a city should fall, primarily, to local elected officials such as the mayor and the district attorney? I mean that way if the job isn’t being done properly, the voters know who to be mad at.

That would work great with rational people, but…

Why? They have made it clear they do not want any help so just stay out and let them burn the whole city down. Make it clear however that no federal buildings will be rebuilt with federal tax money. The city and state will have to foot the bill. If they won’t then no federal presence in what’s left of the city.

Sure, that’ll take care of it.

Antifa won’t stop until they are put down. And Portland PD isn’t up for that task. Antifa has been declared a domestic terror organization. Members have traveled across state lines to sow their destruction – it’s not even in question, just read the articles about Minneapolis when the riots first started. You’ll see lots of people admitting they are from out of town. So why isn’t the DOJ taking Antifa down through RICO just like the mob? Why are the 300 pending investigations only focus on people committing crimes on the ground? Why aren’t they going after the head of the beast? Track down the funding, track down the leaders and this all falls apart. Something isn’t right when that’s not happening. This is all part of some plan. If you listen to the left, it’s Trump doing a dry run for martial law, but you know that’s projection. These riots will only intensify regardless of who wins in November. This is where I take of my tinfoil hat, but conspiracy theories have been playing out in real life for decades. Otherwise, the DHS would be all over Antifa by now. Whatever happened to the Las Vegas shooting investigation, btw?

Who said that none of the investigations are going after the leaders and funders of Antifa? Who says that DHS isn’t all over Antifa already?

These things take time. Especially when you’re trying to do it without your suspects realizing that they are under a microscope.

They aren’t going to make this stuff public until indictments start dropping.

notamemberofanyorganizedpolicital in reply to TheOldZombie. | August 7, 2020 at 1:02 pm

…..and especially when your intention is to pull up all of the crab grass roots and all before it gets thrown into the trash.

I agree that investigations take time, often years, sometime decades. That does not mean that most of those out creating mayhem cannot be terminated, while their leaders are being smoked out.

It’s not going to stop until the cops start shooting real bullets.

Napoleon brought a cannon and grapeshot. One round was enough.

Hey Portland Police, how about:

“Looters, arsonists and terrorists will be shot on site.”

Whatever happened to that? It works! Try it! The LA Rodney King riots were quashed quickly once the National Guard started shooting.

I think either works.

Just do it! h/t Nike

One or two riflemen could shut the riots off in minutes. Don’t even have to be law enforcement. Defense of a third party is open to anyone witnessing a deadly force attack. Though, it would be prudent to conceal your identity to discourage Marxist prosecutors.

Bullwhips need to come out to get the rioters’ attention.
.

Those South Africa whips….sjambok….. the ones to beat snakes perfectly fits the bill. Yes.. they were used during Apartheid… which a lot of people (Blacks too) pine for. Instead of black mambas … BLM and Antifa… same difference.

I grew up watching old westerns where the only good indian was a dead indian, kind of funny in that I am a quarter Native American, well that applies to rioters. Put them down, improve our gene pool, and greatly lower future problems.

Or maybe the mayor and governor should withdraw completely.

People who didn’t vote for them could assemble on top of the embassy, and US helicopters could ferry them out as the city falls.
Even Cable News might pick that story up.

I did notice that the terrorists stopped attacking federal buildings though. I wonder why?

The why is, that Antifa and BLM are only brave when they are a gang beating up on or killing someone who is defenseless.

Isn’t there a law against crossing State lines to riot?

There are no laws for riots, protests or other similar types of unrest by democrats, independents, aliens and undocumented immigrants. The laws for Republicans are many and diverse and are strictly enforced, including thought crimes, attitudes, facial expressions, smirks and micro and nano aggressions.

This is what happens when one billionaire controls so many elected DAs and Mayors.

The black Portland Police Chief said, according to the above posting, that the violence does nothing to further the BLM movement.

Since they were brought from Africa as slaves and, following the abolition of slavery pioneered by Christians, their treatment as chattels by democrats such as George Wallace, blacks have continued to be used by opportunists of all shades.

The current attempt by communists to destroy the freedom of US citizens under the guise of being anti-fascist has found a perfect cover for their evil intent. The white, godless excrement has only to shout Black Lives Matter and the blacks are used yet again.

Blacks and whites can stand together as Christians and live in peace. Put not your trust in man is, I think, a sentiment often expressed in the Bible.

Instantly, the leftist narrative became that the violence in Portland was simply a reasonable reaction to “Trump’s stormtroopers.” And/or that Portland antifa violence was a “myth.”

Absolutely no one believed that for one second.
———————————-
LOL, you must not read the comment sections on sites. Those stupid useful idiots believed Every. Word. And. Still. Do.

Heh, good point. Useful idiots gonna useful idiot and that is who the message is intended for; everyone else knows better, including the leftstream media and pols pushing the BS.