People tore down a Thomas Jefferson statue in Portland a few days ago. 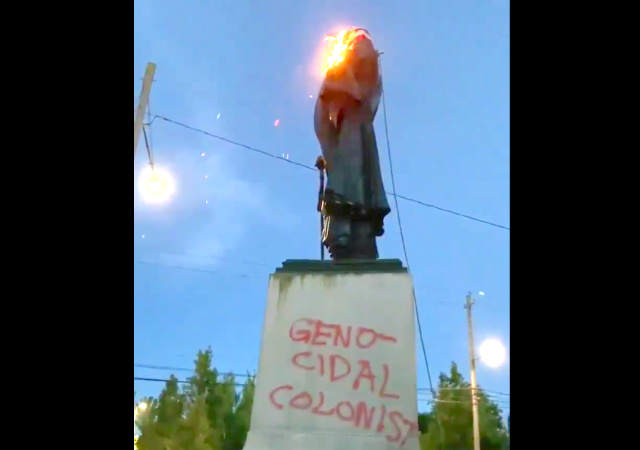 CBS affiliate KOIN in Portland, OR, was on the scene for protests in the city when its reporters spotted people vandalizing and eventually toppling a George Washington statue.

About 20 demonstrators have covered the head of a statue of George Washington in a flag and set fire to the flag at NE Sandy and 57th. There also appears to be some graffiti on the statute.

The group of people at NE Sandy and 57th has pulled down the George Washington statue and vandalized it with graffiti. Those responsible have left and police are now on the scene.

Protesters near the Justice Center have started walking north on SW 6th Street.

The George Washington statue on NE Sandy in #Portland #Oregon has been pulled down and vandalized. Portland Police officers inspected the damage. Someone left a note and a few dollars on it next to the spray painted bronze. #koin6news pic.twitter.com/e5LYbDtvMa

Antifa rioters on Sandy Blvd. in Portland draped a US flag over a George Washington statue & set it on fire. They then toppled the statue. “Genocidal colonist” & “f— cops” are sprayed on monument. Rioters have began to build another autonomous zone nearby. pic.twitter.com/TrZkhPK9zp

The destruction took place a few days after rioters tore down a statue of Thomas Jefferson outside of Portland.

The statue sat in front of a high school named for him.

Thomas Jefferson statue now toppled over at Jefferson High School. This was the meeting spot for tonight’s march in Portland. Wasn’t like this before we left at 7:15.

A speaker here says, “We’re taking the city back, one racist statue at a time.” #Portland #breakingnews pic.twitter.com/PiRh00yPzv

Will they demand that the Washington Post change its name?

Theae are an armies of evil-doers, led by evil people – obama is villian #1.

This violence and maoism needs to be met head-on, by any means necessary, before their gasoline bombs are used to burn us alive instead of cars.

AG Barr is befudled, and living in another time. Rats sre coming out of the woodwork from the supreme court tti the military to the senate.

If this violence and treason and maoism isn’t met head-on NOW with great will, our country will explodw into chaos in a short time.

This is obama plan B. Hillary xlinton blew Plan A.

The time for action is NOW. As that traitor obama once urged: get in their faces. Villanize anyone aligning with obama or soros or sickos like tim kaine.

Take the medicine now, or fight for your lives in short order.

TFR–unfortunately have to agree with you but with one added consequence the leftists/fascists/progressives may not have anticipated–if they are successful in dispensing with the constitution, the courts, the police forces nationwide, then there will be nothing left to protect them–nothing

as we have heard for most of this life: ” beware the wrath of a quiet man/woman for once it is aroused it is invincible. ”

washington may have been many different things. a colonist wasn’t one of them.

De-funding the police is not necessary if they are standing down and no longer doing their job. What’s the difference?

Burn a gay flag or a fascist flag and see what happens. People they are coming for you. We need new rules WE win they lose.

We knew they’d get to George Washington, eventually, didn’t we?

What do we also know?

The lawyers throwing Molotov cocktails in New York are getting the book thrown at them. Rioters and arsonists are being identified and charged.

The top handful of miscreants at the DOJ and FBI have been replaced, and may be prosecuted, after full investigation.

The Democrats howling RINO! at Lindsey Graham, chairman of the Judiciary Committee, were unable to primary him, and he now has subpoena power.

We are coming up on another Presidential election, where the Party is continuing to pay violent people to discourage voter participation by Trump supporters, and where very large social media companies have abandoned their role as platforms, preferring to support the government of a foreign country. And Americans keep pulling the curtain aside, so that they get exposed in their maneuverings.

I’ll spend another night in November, wondering whether we will still have a country in the morning, mainly because I am far too well acquainted with the way the Party in my state of residence, California, cheats.

Been saying more and more, we do not have a “political leader”, we have no real ability to organize. We’d better start now because remember how Obama weaponized virtually every agency against conservatives/ tea party groups etc. When they get back in power this cycle, or next etc… it will be gloves off. We need a Nigel, with a lot more political stamina. Who will it be? Someone known to us now, or someone from the rear of the bleachers with a rallying message we can all get behind? But one thing is for sure, we need one NOW

Isn’t it time to start kicking their asses?

With no police around until after it was down. Pathetic response.

Just wait until the Communists go after the statues of Martin Luther King, Jr.

If you tell the average college student that people should be judged according to the content of their character and not the color of their skin, you run the risk of being labeled a “white supremacist” and getting curb stomped (all in the Holy Name of Tolerance and Diversity). Thus, MLK will eventually be toppled.

Watch soon for one or more factions of our nation’s new, self-appointed, socially woke and just Cultural Guard, the New Power Now movement, to demand:

That the six-pointed or -roundly-edged, 13-star-holding, celestially-suspended design appearing over the eagle’s head — and sitting neatly above the wind-blown ribbon, held firmly in the eagle’s beak and boldly stating our founding national motto, E PLURIBUS UNUM, in the official Seal of the United States — be removed from the Seal.

Why? Perhaps any number of woke, SJWs would feel unsafe, threatened, and culturally excluded by the (Star-of-David-shaped; Mmmm) design, created originally in 1782, after declaring our independence and before the end of the Revolutionary War.

In other words, when our young nation was still struggling for our freedom and full independence from GB; before we fully and effectively united the states under a masterful Constitution; and thus during the post-colonial, halcyon and oppressive heydays of slavery, it might be viewed.

Erase, this likely cancel-intention might claim, any connection to the plight and blessings of the ancient Israelites, who inspired so many of our founders in that nation-as-a-people’s connection to the Divine Creator of our unalienable rights to life, liberty, and the pursuit of happiness.

No matter the ways these rights emblemize the idealized, then-yet but later-realized equality of all men (and later, women); no matter at all. Erase it, make it gone! scream the warriors of the New Power Now movement, the paramilitary wing of the Cultural Guard, our new social and political masters.

What are our elected representatives and head of state letting happen? Let’s see if our president, at least, is hip to the threat by addressing it head-on tomorrow night in Tulsa.

Do you think any of these people know or care what conservatives are saying to each other on comboxes?
At this point, when elected officials like Jenny Durkham are deliberately refusing to uphold the law and hamstringing police, then it is time to bring in citizen militias to confront the “protesters.”
But what about violence, you say? IT ALL READY IS VIOLENT.
I think it’s time to show these toy Bolsheviks and champagne Jacobins what real revolutionaries face. Say this for Mao, Che’, etc. They were all in; they put their ass on the line. I don’t think 90% of these punks could go 24 hours w/o dinner from Mommy.
There reaches a point when you have to DO something, and I think that point is rapidly approaching.

I agree. We are in a hot (shooting) civil war and have been since the 1960s. So far the body count has been very low, but that is changing before our eyes.

Antifa and BLM may look like incompetent clowns and bullies, but don’t be fooled. They have replaced the KKK as the Communist Party’s paramilitary wing, and they enjoy massive legal and financial support (not to mention almost unlimited access to automatic weapons and near 100% control of the media).

Given the massive rot in government at all levels – including, I am sorry to say, the military – I would not be surprised if these terrorist groups started wielding specialized guns (anti-tank and anti-aircraft) and small artillery. Those who think I am being too paranoid should look at history and at how previous Communist insurgencies got military weapons that were supposedly impossible to obtain. People should not underestimate the American Khmer Rouge.

This is the starting point of their revolution. Stalin like moves are being made, well funded through Soros and the other globalists who believe they will be in charge.

These people are talking about freedom, yet it is only about freedom for them to do as they please while controlling the masses. The left fears a free people. Free people think too much.

I talk to a lot of people all over my area. Most of them are seething over the shutdown which most almost universally believe was BS. The riots are known to have been organized. Even liberal friends of mine who were preaching Stay at Home found that to be fine for a week or two, then reality hit them between the eyes. There is no one I’ve spoken to who like Cuomo at all.

This is a power grab and the starting point where they believe they will overthrow the government, or at least have the National Socialists voted in power, and they will keep this up unless they are crushed. BLM and Antifa are terrorist organizations, and they need to be treated as such.

The good news is they are factions from La Raza, BLM, Antifa Fascists, Black Panthers, and who knows what other off shoot communist groups, all with different demands and visions. They are already at odds with each other. There is a danger in the strongest group gaining the control, then purges will start.

These are the darkest days we have seen in this country since at least the Civil War. It is civil war.

In my home state, Ohio, the capitol is named Columbus. A statue of Christopher is being removed. No need for riots, Political Correctness will do.

There are many locations in America named Jefferson – towns, counties, and so forth. How long before the renaming of those starts?
.

Every American household needs at least one gun and a person who knows how to use it when the Black Lives Matter mob rampages with the blessing of Democratic politicians. The battle for the future of America will take place in the streets. It has now underway.