“That’s a myth that’s been spread only in Washington D.C.” 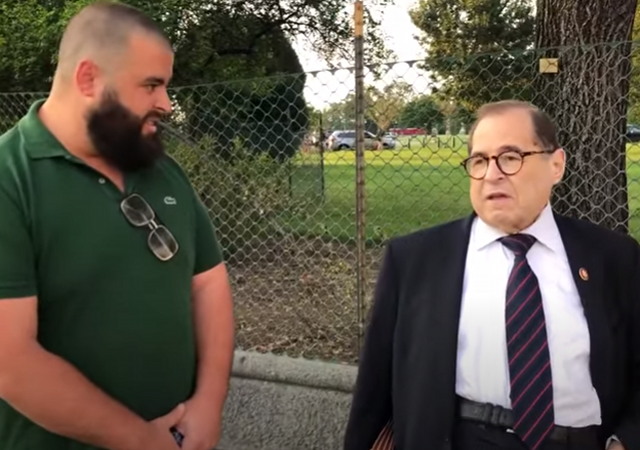 The silence from Democrats over the left-wing violence unfolding in American cities like Portland is deafening. To make matters worse, when they do finally speak up, their words are an insult to our intelligence.

Rep. Jerry Nadler (D-NY), who pushed the Russia hoax for three years, was recently asked about Antifa violence in Portland, and said with a straight face that it’s a “myth.”

Tristan Justice writes at The Federalist:

Rep. Jerry Nadler Brushes Off Antifa Violence As A ‘Myth’

New York Democratic Congressman Jerry Nadler chalked up the recent epidemic of Antifa violence in Portland as nothing more than right-wing myth on Sunday when asked about his thoughts over a militant mob terrorizing one of the nation’s largest cities.

“Do you disavow the violence from Antifa?” asked writer-producer Austen Fletcher.

“That’s a myth that’s been spread only in Washington D.C.” Nadler asserted.

“About Antifa in Portland?” Fletcher clarified.

The House Judiciary chairman was then shuffled away from the interview by staff as Fletcher continued to explain the situation unfolding in the Pacific Northwest.

I ran into Jerry Nadler in DC and asked him to disavow the Antifa violence/rioting in Portland.

Once again, Democrats are telling us not to believe what we can see with our own eyes.

My colleague Mary Chastain wrote an extensive report yesterday about the violence in Portland, which included this quote from Associated Press reporter Mike Balsamo:

“It’s scary. You open those doors out, when the crowd is shaking the fence, and … on the other side of that fence are people that want to kill you because of the job we chose to do and what we represent,” said a Deputy U.S. Marshal who has been protecting the courthouse for weeks. He requested anonymity because protesters have identified him and posted his personal information online.

Has Jerry Nadler turned on a TV lately?

The lights inside the courthouse have to be turned off for safety & the light from high-powered lasers bounced across the lobby almost all night. The fear is palpable. Three officers were struck in the last few weeks & still haven’t regained their vision. pic.twitter.com/33Mt2WyNsV

Or better yet, has he looked at Twitter? Elijah Schaffer of The Blaze has been on the ground in Portland for days:

SHOCKING: This shows just how many mortars Portland protesters launch at the fed courthouse in just 37 seconds

This kind of agitation goes on until they successfully draw out federal officers pic.twitter.com/JjC4MureRo

BREAKIN: Over the bull sh*t, federal police unleash crowd control munitions on rioters pursuing them back to the federal courthouse pic.twitter.com/6YhgNrMNAf

Portland Police confiscated loaded magazines and molatov cocktails at the park near the federal courthouse pic.twitter.com/YYNVAt1i7D

Journalist Andy Ngo is also on the scene:

There were 20 injuries to federal officers in one weekend in Portland. Antifa rioters throw projectiles like canned food and rocks at officers. They blind them with lasers and then throw explosive fireworks at their feet. #PortlandRiots pic.twitter.com/mLH5h5uDVs

This is how some officers in Portland have become injured. The explosive fireworks are used as IED. #PorrlandRiots pic.twitter.com/OSJG2c5faL

Nearly every night for weeks, #antifa & other far-left rioters in Portland have used powerful explosive fireworks as weapons against law enforcement, & to start fires. This has resulted in both local & federal officers suffering concussions & burns. https://t.co/tUbFhDtGhO pic.twitter.com/zkj5mMkOce

As Professor Jacobson recently pointed out, the only “myth” being perpetuated in Portland is the rioters’ use of the phrase “Hands up, don’t shoot!”

Jerry Nadler is a fool, who thinks Americans are as ignorant and out of touch as he is.

Nadler is a complete buffoon.

Not just a buffoon, By and large the Democratic party has collectively become pathological liars. This might have something to with various factions they admire in their constituency. Admiring the dumbest of the dumb, and following their lead.

If this guy didn’t lie or malign, he’d have nothing to say.

With a nut like Cortez, at least she’s transparent. This guy is very, very creepy – and righteously so.

Wadler’s belt is just slightly higher than his equator; in the northern hemisphere so to speak. His walking/gait seems odd; the shoes look like special order. Yet this peculiar individual heads up an important House committee.

the saddest state of affairs is, he keeps getting elected. how can so many people vote for this person, not once but 15 times and likely a 16th time.

you need to understand most democrats have not idea who they are voting for, they just check the democratic party line and that’s it, more importantly I don’t think a lot of them know they voted. how could aoc win the primary

We can blame the Republican Party. Squarely.

What efforts has that romney hack Ronna Romney McDaniel (she’s head of the GOP)made in unseating Nadler?

PLENTY of Republicans do the same thing. It’s how we get people like the Senatrix from Maine, anong others.

When you’re stuffing the ballot box you don’t have time to check anything other than straight D.

Nadler thinks the Americans are as ignorant and out of touch as he us.
Biden leads by ten points (+/-).
QED

This has always seemed such a B.S. question. Usually a politician will answer “yes”, while at the same time supporting it while nobody’s looking.

Nadler’s response is near psychotic in its blatant disregard for obvious reality, but even a sane politician is never going to give an accurate answer to a question like this. And if there’s no way to turn it into something useful, like a perjury trap, the question is just noise.

Well, the GOPe is doing it part to help Nadler by maintaining silence in the face of rising brownshirt violence.

Never forget, dear readers, that the GOPe is in favor of open borders, gun control, and single payer health care.

I’ll just put this here so that people may comment on it if they wish.

CNN’s Stelter accused of breaching network’s confidentiality agreement with Sandmann: ‘May cost him his job’

Gee, what a surprise. Wonder if he will actually lose his job. We could all hope but I won’t hold my breath.

notamemberofanyorganizedpolicital in reply to Lucifer Morningstar. | July 28, 2020 at 11:45 am

This is the same guy that a couple weeks ago was arguing that the stock market crash back in March and April was worse than 1929. That was while the NASCAQ was posting new records and the others had made back almost all the losses. These guys just make schifft up and the faithful listeners just nod in agreement.

Jerry, you will star in SO MANY GOP campaign ads this year.
Nice work.

He’s hiding Antifa in his pants

the short version: like too many entrenched democrat politicians, he just doesn’t care—his job is secure—his scams/cons/grafts will continue unabated unless we do what needs to be done—get out the votes in massive numbers to flush these worthless traitors from power

Jabba is a fool! The dinosaur media, a wholly owned subsidiary of the Democrat party, provides cover for him. The National media, and our local newsreaders, refer to the riots as “protests”.

This is a nativity pushed by the left. My democratic business partner told me there were only a handful of ANTIFA nation wide…He truly believes what he said. I read an article not to long ago that said no ANTIFA had been arested associated with riots.

I saw that video and could barely keep my lunch down. Nadler has really turned into The Penguin. It’s grotesque.

As to his blatant lies … he hasn’t changed. Pretty much every word that has ever come out of his mouth has been a lie. That mouth was designed for nothing but eating and, now, since he had his stomach taken out to slim down to waddling shape that mouth is in lie-overdrive to compensate for the lack of cake and jelly donuts.

And I would add that Nadler, in this lie to give aid and comfort to the insurrectionists, has committed treason – because we all know that he knows that he’s lying and the only reason to do so is to help those bring down America. He should be hauled away (along with many, many other treasonous dems).

None so blind as those who refuse to see eh Nadler? The worse part is trying to pull the wool over other’s eyes though when anybody who cares to pay even a bit of attention knows these riots, not protests RIOTS, have been going on for weeks now!

Well, when Nadler gaslights, I guess we know where he gets the gas.

Jim Jordan’s video at the house hearing clearly showed that if the press was adequately reporting the violence, Jerry Nadler couldn’t straight-faced say, “Antifa violence is a myth.”

Nadler is to be congratulated. After many years of work, he has achieved full moron. Well done, Jerry.