Tinfoil Hat: Oregon Dem Congressman Chains Self To USPS Drop Box To Save It From Donald Trump

Tinfoil Hat: Oregon Dem Congressman Chains Self To USPS Drop Box To Save It From Donald Trump

Rep. Peter DeFazio (D-OR) promotes conspiracy hoax that Trump is “trying to tear apart our Postal Service” and people need to defend “every mailbox in America.” 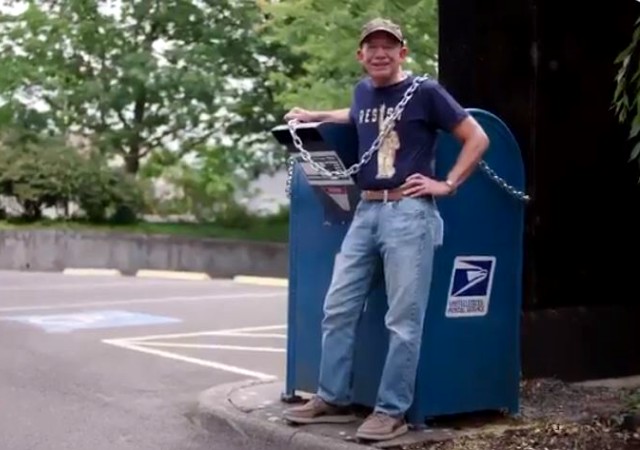 What with the conspiracy theories about how President Trump is allegedly using the USPS to steal the election reaching peak stupid on social media, in newsrooms, and in the murky fever swamps of MSNBC and CNN, one Oregon Democrat hatched a plan Tuesday to out-virtue signal all other Democrats about how he was willing to take drastic measures in order to protect the postal service.

Rep. Peter DeFazio (D-OR) posted a video to his Twitter account yesterday of him chaining himself to a USPS drop box in Oregon, declaring “they’re not gettin’ this one”:

They’re trying to tear apart our Postal Service piece by piece. But Peter DeFazio is defending our right to vote (and every mailbox in America). #USPSisEssential #USPS #SaveThePostOffice pic.twitter.com/f9s6syjuA9

He’s posted a number of videos over the last several days alleging, without evidence, the conspiracy theory about Trump and the postal service. He also managed to allege Trump was also responsible for supposed delays in mail-order prescription drugs reaching senior citizens and military veterans because why not?

The USPS has confirmed some postal service drop boxes in Portland and Eugene have recently been removed (not by MAGA hat wearers) but says it was for legitimate reasons:

Residents of Portland and Eugene were alarmed this week to see some U.S. Postal Service mailboxes removed from neighborhood streets and hauled away in flatbed trucks.

But a Postal Service spokesperson said declining mail volume means the Postal Service is removing “duplicate” boxes from areas that have multiple collection boxes. The USPS confirmed that four mailboxes were removed in Portland this week.

“First-class mail volume has declined significantly in the U.S., especially since the pandemic,” Ernie Swanson, a spokesman for the USPS, told The Oregonian/OregonLive. “That translates to less mail in collection boxes.”

Another Postal Service spokesperson, David Rupert, said some of the mailboxes were also removed and replaced with higher-security boxes.

The scaremongering by Democrats on postal service boxes has gotten so out of control that even the Democrat-friendly “fact-checkers” at Snopes stepped in to try and clear up some of the confusion:

We don’t have statistics about how COVID-19 has impacted the volume of mail. However, a fact sheet from the Postal Service does show that the volume of mail has decreased over the last decade. In 2009, 77.6 billion pieces of first class mail were sent through post office. In 2019, that number sat just below 55 billion. Conversely, the number of delivery points has increased by about 9 million over the last decade.

It should also be noted that removing collection boxes has been a cost saving measure used by Postal Service for years. In 2011, the Seattle Post-Intelligencer reported that number of collection boxes had declined by 60% between 1985 and 2011.

The Snopes fact check and the reports that predate Trump’s administration on drop box removal should put these Democratic conspiracy theories to rest, but unfortunately, they won’t.

He is an idiot, and anyone who votes for him counts for 2 idiots.
He is not chained.
If he is serious about chaining himself to the mailbox, let me do it. I will make sure he is properly chained.

Can we start welding on Antifa and BLM slugs and then welding their chains to a mailbox?

And no shield between their skin and the chains.

He’s always been a freakish little dweeb hasn’t he?

One leftist idiot chaining himself to a mailbox is an anomaly.

Thousands of leftist idiots chaining themselves to mailboxes all over the country and staying chained there, 24/7 until after the election would be fantastic.

All we need to see it happen is for Trump to come out and say “Please don’t chain yourself to mailboxes.” Come on, let’s see it. The NeverTrumpers are like lemmings.

Well, OK sure if the guy wants to remain chained up to a mail box that’s fine with me. Of course he won’t stay there. If I shared any committee with him this would be the topic everyday for the first 30 seconds of my remarks/questions.

‘Can someone please check his credentials? REP DeFazio chained himself to mailbox back in Oregon so this guy must be an imposter ‘.

“Where do you want the mail box with a skeleton attached to it?”

Have you considered that he is just running for Dead Letter Office. Typical mail behaviour!

Not much of a chain-job he’s done. He’s such a little feller a pull-chain for a light-bulb would have done the job.

Now if he’d used deck screws through an arm or leg and into the mail box, I might have been convinced of his commitment.

If he was truly committed, he’d have himself locked inside the collection box.

How do you expect to explain that pun to St. Peter?

“I wear the chain I forged in life.”

Mail delivery must be racist somehow. Wake me when AntiFa kicks in his skull for not being woke enough…

When a Dem wack-job member of Congress from Oregon has to resort to this kind of publicity stunt to get attention, despite being a member of the U.S. House majority, you know it’s going to be really tough for Republicans to avoid getting cocky.

So what about the places in Oregon (and elsewhere) that have had mail and package delivery interrupted because of occupations and riots?

How many mailboxes got ripped from the sidewalk and thrown through store windows?

To quote my favorite grandmother:

There’s special and there’s “special.” Were our grannies related?
.

His family and community must be so ashamed for him.

Is he one of Steny Hoyer’s singing eunuchs?

If I rolled my eyes any harder, they’d go all the way around.

Democrats shouldn’t allow DeFazio to stand alone! I think ALL Democrats need to go out immediately and chain themselves to mailboxes everywhere! NanPo…Nadler…Adumb Schitt…they would cause a lot less trouble if they were on street corners chained to mailboxes! LOL!

Better hope he didn’t damage that that’s government property. He needs to go to jail even for this Fiasco the dumbass doesn’t even understand what’s going on with these mailboxes and if he did he’d shut the hell up and anybody that supports him needs to rethink their ability that cast an informed vote

I hear Trump is going to do away with buggy whips too. Scary times.

He can’t be Italian. No Italian is that stupud.

Challenge accepted.
Fredo cuomo and his brother the smot one.

The Dems are trying to make an issue out of a non-issue. The USPS delivers 472 million pieces of mail per day. All of the ballots nationwide would be a little less than half a day’s typical mail.
Spread out over a week or two, it would hardly be noticeable.

Have Peter DeFelatio to wrap the chain around his neck at least a dozen times or those wascally wepublicans might steal the box while he is looking the other way.

I heard Trump is going to remove….(checks notes)….radioactive canisters filled with nuclear waste.

Quick! Chain yourself to one of those canisters ASAP before tRump succeeds in his nefarious plot!! Soviet Amerika is counting on you, Peter!!!

Looking at the photo, a rephrase is in order: Oregon Dem takes a selfie with a chain loosely and symbolically draped around himself.

You don’t need a mailbox. You can protest… vote in person.

Thanks. Now I can’t put off cleaning my monitor any longer.
.

There is a crazy person with a chain scaring people away from the US Post Office mail box. Is that a Federal Crime?

They should just junk the mailbox with the guy still chained to it.

Let the misery follow this guy and his mailbox. We want out.

Reminds me of the stupid Rep. steve cohen KFC grandstanding. Where do they get their ideas? From their basement dwelling TDS constituents sending DM’s on twittr? The left can’t meme and they sure as hell can’t tell the difference between insightful, humorous visuals versus pure cringe stunts.

$10 worth of chain and a pretend shot. Damn I hate Oregon hippies.

Hope this is their last hill to die on this year, but doubt it

Do even leftists buy this showboating? The a-hole wraps a cheap chain around a mailbox, drapes it over his shoulder, and poses for pictures… and this does what, exactly?

A chain of any length and link size weighs more than most realize. I wonder if that’s not just a few 2-foot lengths located for dramatic effect.

I’ve got more chain than this securing my generator.
.

Good move. It’s all PR, but that’s most of politics. It gets him on the front pages, and in a way nobody—at least, nobody in a boring tie reading you the soundbite he thinks you want to hear—can match. “Vote for Me, and you get to see me do stupid stuff. Vote for my Republican opponent, and you’ll never see any trace of him again until the next election.” This twit may be the sharpest Dem in Congress.

This is the kind of leadership the democrat party provides Oregon. The Mayor of Pukeland, the Governor, US Senators of Oregon told the feds to leave. The rule of law means nothing to these politicians. Burn Loot Murder is okay with them, if it hurts Trump. The citizens be damned. Mailboxes are an issue now. How mentally ill can they get.

Who are the idiots who vote for these freaks?

Dems….
they’ve ALL at some point, taken drama classes.

These comments are hilarious!

I would think that it’s a federal crime to chain yourself to a post office drop box – or to do anything to such a box other than drop a legal letter or package in it with appropriate postage on it. Federal. I’m sure there could be a few years in a federal pen for this crime.

They should arrest this guy and then, just for fun, cart away the drop box as evidence.

“Nobody’s coming to take your mailboxes, you paranoid promosexual!”