Biden: “They’re going around literally with tractor trailers picking up mailboxes. You oughta go online and check out what they’re doing in Oregon. I mean, it’s bizarre!” 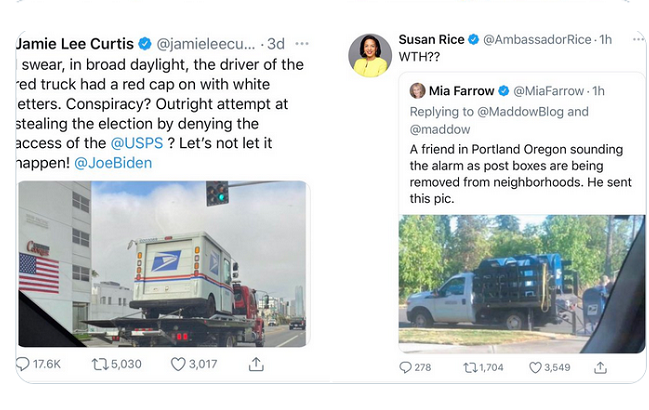 Some days, I just don’t know whether to laugh or cry at the state of the left and what they are attempting to do to our great country.  This day, though, I am laughing pretty hard at Joe Biden and Susan Rice, and it’s an easy one.

Hollyweirds Mia Farrow and Jamie Lee Curtis tweeted a ridiculous “gotcha” photo of trucks removing USPS mailboxes from Oregon neighborhoods as supposed “evidence” that President Trump is removing mailboxes in an effort to stop people from mailing in their votes.

Ok it’s one thing for the actress from Halloween to spread conspiracy theories — she’s seen some things.

Already top-door cray-cray, right?  My guess is that Portland has quite more than a few “shy” Trump voters at this point, having watched their city burn and violent crime spike for months on end.  Biden may suspect the same thing, since he, too, leapt on the TDS-induced conspiracy theory.

Biden on USPS at virtual fundraiser tonight, per @hollyotterbein

“They’re going around literally with tractor trailers picking up mailboxes. You oughta go online and check out what they're doing in Oregon. I mean, it's bizarre!" pic.twitter.com/zcd0pzj9Jd

The problem?  The mailboxes are being replaced because they are old and presumably on schedule for replacement.  That’s it.  Nothing to see here.

The new boxes contain a shredder that “processes” all ballots from Republicans.

Considering that the postal workers’ union has endorsed Biden, any
Republican ballots that escape the shredder will likely be accidentally dropped down the memory hole.

WA is vote by mail state-wide. They can be mailed back OR dropped in one of several dedicated boxes in the county. There’s always a line of cars at the dedicated ballot drop box we use – so obviously not everyone mails them back.

The USPS truck on the flat bed? Probably headed to the shop as USPS is pretty hard on trucks and not the best at taking care of them. So the panic is that truck is supposedly filled with D ballots and a MAGA hat wearing driver is stealing it? In WA ballots are sent out about 10 days before the election. So one truck, on a single day, running an approved route, MIGHT contain 1/10th of the ballots IF they were mailed from the voter’s home or a post office drop box that truck collects from.

Will they be brow beaten by CNN for this? Doubtful.

In addition to being liars, frauds, and corrupted, the democrats are dumb. Dumber than piles of dog poo.

The sad thing is I doubt it made them rethink their support for vote-by-mail for even a split second.

notamemberofanyorganizedpolicital in reply to Alex deWynter. | August 15, 2020 at 10:50 pm

“Cheat by Mail” is the proper DNC internal phrase.

Postboxes are a weird thing to replace right about now. All those intricate moving parts inside get out of kilter from time to time, I’m sure, but unless somebody is putting noxious stuff in them (an old Suffragette tactic) they should hardly need to be replaced en masse. Unless the PO is burning up some excess funds in this year’s budget . . . which seems hard to believe, considering that it’s the Post Office.

I do like the thing about the red hat. C’mon, man, what more proof do we need?

How many were damaged in the riots?

The problem with mailboxes are street characters stealing mail out of them. The usual pivoting doors are a thing of the past. So are drive-up chutes.

If hollywood idiots want to blame someone for the mailbox problem, they should look in the mirror: they voted in the morons who created the army of junkies, criminals, bums and psychotics on our streets.

I do like the thing about the red hat. C’mon, man, what more proof do we need?

The marketing team over at RHEL has had a bad four years.

Ooh. Made me think of something. How many of these mailboxes will have molotov cocktails dropped In them on election night.? Absurd to do it because any ballots would have already been mailed but idiots dont need a reason to idiot.

I thought she was Hawaii’s air raid warden?

Okay, nothing personal, but they removed almost ALL mailboxes from Cherokee County, Georgia several years ago. They used to be in many handy places; now they’re really only in front of the post offices themselves and a handful of other spots.

So frankly, if everyone else still has mailboxes, I’m extremely irritated, because I have gotten shafted.

Also, I’m a little tired of mail I’m sent never arriving. I had to have a discussion with a bankruptcy judge about this once. Quite annoying. The post office has A LOT of practices/failures that annoy the hell out of me.

OT, but let’s talk STAMPS. Why don’t they make a second ounce stamp that is at LEAST visually complementary of the FIRST ounce stamp. I send mail with stamps, and they have those stupid little penguins on the 2nd ounce stamps. Why isn’t there more availability of selection on the 2nd ounce stamps, to MATCH the first-ounce stamps with flags?!?! It would look so much better on the envelope. They claim to have little flag ones, but they are NEVER in stock!

The post office disappoints me in at least 22 different ways.

By the way, we aren’t Podunk, Georgia either. We’re 30 minutes north of Atlanta and have about 250,000 people in the county.

It’s even worse in big cities.

My extra ounce stamps are little cowboy hats with red white and blue bunting under the rim. I’ve seen others.

As for them complimenting the first ounce: it’s postage, not an ensemble. (No patent leather stamps after 6pm, no white ones after Labor Day!)

Free-standing mailboxes are not that common anymore. I use the Outgoing Mail slot on the pedestal out front that serves my little side-street. My neighbors on the main road leave mail in their boxes and put the flag up. Both work fine.

I got my first mail when I got some sort of breakfast cereal prize at age 4. 67 years of mail service. My service – regardless where I have lived – has been almost completely flawless. And fast. Semi-rural eastern Tennessee to the Coachella Valley in two days is an example. Bpnsall CA to a Pensacola military base in three maximum is another. YMMV of course.

Grizzly, I’m sending business mail. I’m a lawyer and I’d like the mail to look professional, not like a school child that doesn’t recognize the stamps don’t match.

I refuse to get a Pitney-Bowes or the Stamps.com setup. The damn post office should remember it has CUSTOMERS and they come for different functions.

Also, Grizzly, I had a filing in a bankruptcy case for a client, it was probably around 2010 or 2011, at the federal courthouse in Atlanta. The clerk’s office mailed me a notice the next day or perhaps 2 days later. It took 17 days for that notice to arrive at my post office box in Lebanon, Georgia, which is 40 minutes from Atlanta. I closed the box, nothing was reliable arriving at Lebanon. Another piece in the same case never arrived.

I regularly have mail that doesn’t arrive. I know, because I’m to receive various items from judges’ offices and clerks’ offices. I truly believe they have sent the mail they said they have mailed. Perhaps not. I have contacted the local postmaster on several occasions. Nothing improves. This has gone on for years.

“So frankly, if everyone else still has mailboxes, I’m extremely irritated, because I have gotten shafted.”

There should be at least one in the vicinity of every phone booth. Is this regulation being violated in your state?

The NRA and the Russians are removing mailboxes and USPS trucks in a nefarious plot to cause Oregon to tip over and capsize.

Yep…
It’s true.
We are cancelling all U.S. Mail Privileges for every Blue State, without exception.
And we are getting rid of all those pesky mail sorting machines as well.
Understand, we aren’t doing this light-hartedly.
We are doing it because you are Democrats, and you aren’t smart enough to know better.
Really, we shouldn’t allow you to cast ballot at all.

I am with you Miss Stamper. USPS sucks big time. I ordered some safety goggles from a company in Houston and they were shipped by USPS. We used to receive our mail from Houston to the local USPS. Now for some insane reason it now goes from Houston to Shreveport then to our local post office. We are halfway between Houston and Shreveport. The goggles made the trip between Houston and Shreveport three times before it finally was delivered. Ten days shipping for the two hour trip to us. The Postmaster at the local office had the audacity to tell me I was wrong about the shipping sequence even though I had the tracking documents.

I take my outgoing snail mail to the drive-up drop box at the post office — every six months, like clockwork. If it weren’t for forever stamps I’d have to go inside and pay postage at the counter.

William Binney is the former technical director of the U.S. National Security Agency who worked at the agency for 30 years. He is a respected independent critic of how American intelligence services abuse their powers to illegally spy on private communications of U.S. citizens and around the globe.

Given his expert inside knowledge, it is worth paying attention to what Binney says.

In a media interview this week, he dismissed the so-called Russiagate scandal as a “fabrication” orchestrated by the American Central Intelligence Agency. Many other observers have come to the same conclusion about allegations that Russia interfered in the 2016 U.S. elections with the objective of helping Donald Trump get elected.

What bubble do they live in, they never saw a postal truck being towed?

The truth as always is exactly the opposite of what they accuse. Oregon went to vote-by-mail in 1996 so they could get Ron Wyden into the Senate, who had never won a state-wide race before. It worked. He’s been there ever since, and republicans stopped winning state-wide races in Oregon.

No doubt unrelated to state-wide mail-in voting, or so I’m sure Oregon’s office of election will tell us.

Okay. The letter box issue is just fright stuff as is a mail truck on a flatbed.

What about the removal of sorting machines. Does anyone have the ACTUAL story on that meme? I can’t find one.

This is a ridiculous, childish story.

And that’s deliberate. The meme has been planted—these mail-fraud stories are nutty conspiracy theories, as anybody can see, and they should be ignored by all rational adults.

Then in the near future, when disturbing facts about the D’rat’s real mail-in voter fraud start to surface, the press will just claim that all that stuff is a nutty conspiracy theory just like the planted one about mailboxes, so nothing to see here, move along . . . They’re playing a modern game of “the boy who cried mail fraud.”

The D’rats are serious about voter fraud, and they’ll do anything they can to increase the odds that they get away with it.

Shows what a crazy fool he is. I haven’t seen a mailbox except at a post office of shopping center gor years.

What little outgoing mail I have is picked up at my mail box.