Democrats need to keep their base hating Trump to turn out the vote. The Postal Service conspiracy is intended to stoke anger after ‘Russian collusion’ and other talking points have faded. 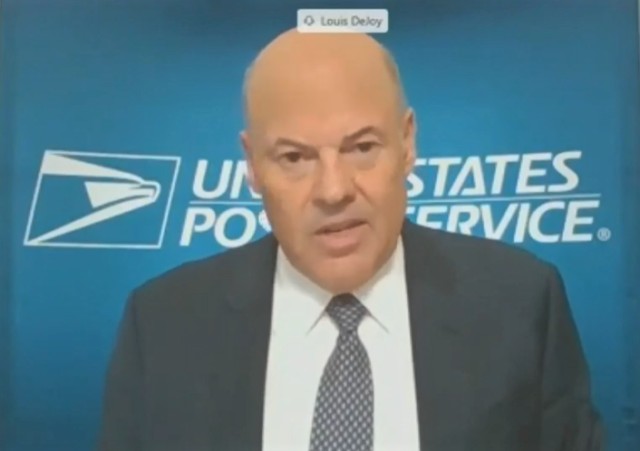 The Biden Campaign, Nancy Pelosi, Democrats, and the media have created a panic over the Postal Service centered around conspiracy theories that Trump is trying to steal the election by partially shutting down and interfering with mail delivery.

The Postal Service conspiracy was the centerpiece of the Democratic National Convention.

There have been photos circulated by high profile Hollywood and political types of postal trucks on flatbed trucks, and mail drop boxes being carted away. This is all a hoax, a deliberate attempt to stoke panic out of nothing.

Here are some of our prior posts:

The Postmaster General Louis DeJoy testified before the Senate today, and completely punctured the insane conspiracy theories. There have been no changes that would interfere with mail delivery. The removal of drop boxes was on a routine schedule of reevaluation of usage that has been going on for at least a decade. The removal of mail sorting equipment was because it is not needed, and it will not be put back into service because there is no need. Ballots by mail will continue to be given priority at least on the level of first class mail. There has been no cutback on overtime.

Here are some excerpts from today’s testimony.

Postmaster General Louis DeJoy: under my leadership, “we went from 88% on-time to 97% on-time delivery”https://t.co/03optgmyZa pic.twitter.com/Z9Ah1dHRqz

Postmaster General Louis DeJoy corrects false narrative on normal 50-year blue box retirement process, "when I found out about it…I decided to stop it and we'll pick it up after the election"https://t.co/qSjl3dSx8P pic.twitter.com/xN1RqHhTyo

Postmaster General Louis DeJoy corrects false Democrat narrative: “there has been no changes in any policies with regard to election mail for the 2020 election"https://t.co/Q50wD7HaKh pic.twitter.com/CAyWbKtIqk

Postmaster General Louis DeJoy fact checks Democrat senator: “we never eliminated overtime…since I've been here we've spent $700 million on overtime, overtime runs on a 13% rate before I got here and it runs at a 13% rate now” pic.twitter.com/rSzWyC3t1s

Sen. Gary Peters: "Can you confirm there will be no post office closures or suspensions before November 3rd?"

Postmaster General Louis DeJoy: "I have confirmed that post office closures are not a directive I gave… I suspended that until after the election." pic.twitter.com/Q1BluAFvYP

"Will you be bringing back any mail sorting machines that have been removed since you've become Postmaster General?"

Louis DeJoy: "There's no intention to do that. They're not needed, sir."

"So you will not bring back any processors?"

NEW: "I have never spoken to the president about the Postal Service other than to congratulate me when I accepted the position," embattled Postmaster General Louis DeJoy testifies. https://t.co/x27jkU0zxz pic.twitter.com/GmgQ7ciJMH

Democrats need to keep their base hating Trump to turn out the vote. The Postal Service conspiracy is intended to stoke anger after ‘Russian collusion’ and other talking points have faded.

Peters is the epitome of a do-nothing Legislator. He has no bills to his credit. His only qualification for this hearing is the he may have submitted legislation naming a post office or other government building. John James, Jr. needs to send him home in November.

I was “all in” for James last time around against Stabenow. Hopefully his name recognition is up as a result of the last election.

I voted for James last time, I’ll vote for him again this time. Peters is a union owned hack.

Truth does not matter. It is the narrative that counts. A narrative repeated over and over again until it is absorbed by those of dilatory discernment.

If the USPS is all Trump ( I would bet more Democrat but go with me here) wouldn’t it be better to defund them?

“So you will not bring back any processors?”
“They’re not needed, sir.”
CNN: Postmaster General refuses to bring back processors Trump ordered removed

Fixed that for you as the liberal media has to imply that somehow DeJoy is fighting for his job when in reality he’s done nothing wrong or illegal. (And note in the above Tweets ABC is the only one that used that term. Everyone else just referred to him as “Postmaster”. Go figure.)

Republicans should forget etiquette and parliamentary niceties — they don’t matter now — and quickly dismiss any Dem electoral claim against the former lacking validated evidence. The Dems’ conduct, following their mischievous intentions, should be neither entertained nor tolerated.

Bad government needs to be limited by the relatively better practitioners. That no legislator is perfect is no reason not to look after the well-being of the Senate for the sake of the Congress, the Constitution, and the whole American society.

Judge and deliberate; discern and conclude, Senator. Politics today is that critical, and precarious.

The population of Jamestown, Missouri was 524 at the 2010 census according to wiki.
Yeah, what about it? The duties of sorting can be taken over by the next nearest town. Send a truck every morning with the mail needing delivery for the carrier/s.

As long as election officials do their jobs in a timely fashion the ballots have time to be sent, utilized and returned for counting.

The problems will arise from ‘last minute ‘ changes for constitutional amendment or initiatives. Those require new ballots to be printed. Watch for States who have ballot initiative being challenged in court over imprecise and confusing language to suddenly have a ‘crisis’ because they must alter the language and reprint ballots. These States will then demand that they be.allowed more time past election day.

The list of possible shenanigans is long. This is only one. Another prediction, lack of polling place capacity and changed polling places. States will argue that they believed people would vote by mail and were ‘taken by suprise’ at the number of people attempting to vote in person.

I recommend you begin finding out where you polling location is, it may have changed. Find out about staffing, hours of operation, plans for large turn out, ect. Be proactive and don’t wait till election day. These actions let local election officials know that someone is paying attention.

Good idea. The church which has been our polling place since we moved here 20 years ago now has a For Sale sign in the front, and I’m wondering how this will affect our voting process.

People have no idea how the USPS is run. They think Trump can issue an order and the USPS will suddenly implement whatever he wants. In reality, it’s run by a board of governors who select the Postmaster General. And for the people who say, “we don’t need them” we have Fed Ex and UPS.. Well, when you live in a city or a suburban area with a sizeable population, you have a lot of options. In rural areas, you’ll find that Fed-Ex and UPS will not deliver to every address as the USPS is mandated to do. They don’t deliver to my house. Currently, I have packages delivered to my office but when I close up shop and retire, there won’t be any delivery to my door and if the nearest post office is closed because it can’t financially support itself, I’ll be looking at an hour and a half drive one way just to pick up mail.

I hope someone monitors the ballots dropped off by the Soros flunkies a week before the election. To quote Carl Sagan: Boxes and boxes and boxes

I must live in a bubble. I have lived in the same house for 50 years and I have always had to show a gvt issued photo ID to vote. Most of us show our driver’s lic. I live in Tennessee.

This should scare the bejeebers out of people by how quickly the Left, in an effort to push their agenda, can create a crisis out of nothing, use it to essentially paralyze the nation, and the extraordinary level of effort required to put the faux crisis to bed. Even then, we will be hearing about this postal crisis for years to come just like we continue to hear about Trayvon Martin, Trump calling immigrants animals, children locked in cages, “hand’s up, don’t shoot” and so many other fabrications.