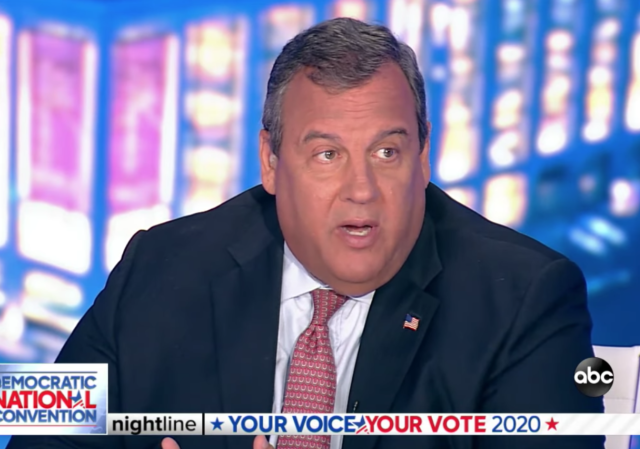 John Kasich (did you know his dad was a mailman?) is part of that little clique of former and would-be public officials who won’t go away and who are forever swaying like a reeds in the wind towards whomever is willing to pay.

Not too long ago, Kasich and a handful of his campaign alumni joined up with the Lincoln Project, the Never Trump outfit working to oust Republicans. Shortly thereafter, Kasich was granted another brief moment in the limelight with a speaking spot at the DNC.

Former Ohio Gov. John Kasich stood at a literal crossroads as he talked about his choice to vote for Joe Biden. “I'm a lifelong Republican, but that attachment holds second place to my responsibility to my country,” he said.#DemConvention key moments: https://t.co/FNYJjoOjM9 pic.twitter.com/iYxX9WLqo2

Crossroads, fork in the road, but what’s the difference, right? Not that words or meanings or standards or principles actually matter or anything…

Anyway, Former NJ Governor Chris Christie, who also ran for president in 2016 along with Kasich (who was then still claiming to be a Republican), had some choice words about Kasich during a political analysis segment on ABC news.

.@ChrisChristie torches Kasich: "Do you know how many Republican governors….endorsed him? Zero & the reason they didn't endorse him is b/c he's a backstabber & untruthful guy….Biden's going to be getting calls from John Kasich, he's going to want to change his phone number." pic.twitter.com/abHLm24TmH

Stephanopoulos: “How big a threat are these Republican endorsements tonight?”

Christie: “Zero. Zero. I mean, they’re meaningless. They were with her, they were With Her 4 years ago, now they’re with Biden, no surprise. And John Kasich, just to show you where John Kasich’s standing is in the Republican party — when he was the only Republican Governor left on the stage in 2016, Donald Trump, Ted Cruz and John Kasich, the three candidates left — do you know how many Republican Governors, his colleagues, his sitting colleagues endorsed John Kasich? Zero. And the reason they didn’t endorse him is because he’s a backstabber and he’s an untruthful guy. So tonight, Republicans are gonna look at that and go, ‘You can have him.’ … on top of all of that, I’ve worked with John a lot, he’s exhausting. Joe Biden is going to be getting calls from John Kasich, he’s going to want to change his phone number.”

In another segment, Christie was asked whether Republican endorsements helped to sway anyone or bring them over, to which he answered “no.”

Did anyone torture themselves by watching it last night?

“For What It’s Worth” dates from 1966. I think that’s when the old Batman show debuted.

It’s almost as if “The Party of Youth” is controlled by decrepit Marxists and Weather Underground terrorists who still believe that the Soviet Union is the future.”

CorkyAgain in reply to notamemberofanyorganizedpolicital. | August 18, 2020 at 3:59 pm

“For What It’s Worth” dates from 1966. I think that’s when the old Batman show debuted.

I recall daddy-joe campaigning sometime (this time around, the 3rd) and talking about “record players.” His spouse and family should be ashamed of wanting to live in the White House so badly that they didn’t just take his drivers’ license away and keep him in his pajamas in the cellar.

Big enough to eat with a fork in the road.

Years ago, I was told that when I got to a fork in the road… Take it!

John Kasich (did you know his dad was a mailman?)

Shouldn’t it be “mail person” or “mail delivery person”. I was triggered.

notamemberofanyorganizedpolicital in reply to jaudio. | August 18, 2020 at 2:38 pm

I thought he was a milk man, like in that Film Noire movie,
The Milk Man Rings Twice.

Whether you like Christie or not, he did a good job with that answer, that Kasich is persona non grata in the GOP Party. Seriously, even when Kasich was running for POTUS in 2016 how many people actually knew who he was? He’s now a former governor trying to stay relevant and hoping he’ll get a nice job in a Dem administration since he’s burned his bridges with the GOP.

Whichever Emanuel was on that panel was probably silently nodding his head with what Christie was saying.

Agreed. Like him or not, you don’t have to wonder what his opinion is.

Agree or not agree, it’s easy to respect somebody like him.
.

Initially a backer of Kasich. Now I agree with Christie.

When gun-banner Chris Christie calls another Republican a “backstabber,” you know it has to be an Excalibur-grade accusation.

These never TRumpers are in for a wake-up call when Trump wins. The GOP has no use for them now and the DNC will have no use for them after the re-election. Leaving them without a party.

DNC use is already over.

The DNC had this has been Obama speak last night so why not this Obama?

“To cap it all off, there was Mitchell Obama, the barely literate (per Christopher Hitchens) she-thing beard of the ex-president who does what she does best; berate the nation for all of the terrible indignities she had to suffer such as an affirmative action degree from Princeton and a $300,000 a year no-show job kicking sick ghetto people out of emergency rooms. Oh the humanity, the poor dear.”

Is anyone dumb enough to believe the the GOP has Trump’s back in this election? Republicans are every bit as traitorous as the worst Dems. They are just bigger hypocrites.

Phil, my apologies. My thumbs-up turned into a thumbs-down thanks to fat fingers.

As far as the lies is this Repubican report, consider this comment: “particularly by maximizing the impact of the disclosure of Democratic emails hacked by Russian intelligence officers.” There is no evidence that the Russians actually hacked this. The people who would have been expert to determine this, the Fibbies, were denied access. Instead, a private firm, Crowdstrike, linked to Podesta and run by a Ukrainian nationalist determined that there were “indications” that the Russians had hacked it.

The rest of the report was full of similar lies.

There is little doubt that the Russians, with several hundred thousand to a couple of million of dollars in funding, took out HilLIARy! and her $2 billion in funding.

The ignorance of the Repubicans and their mendacity is only exceeded by Mitchy McConnell’s greed and stupidity.

In case you are wondering, the second-to-last paragraph is sarcasm.

One further: https://www.foxnews.com/opinion/trump-russia-collusion-senate-gregg-jarrett
This says the Senate has reversed themselves on the Trump/Russian collusion report. Of course, that could mean that either they were idiots and fools then, nor they are now. I subscribe to the “always idiots and fools” school for the Senate.

I believe the Republicans did this hoping to grab a big headline and hurt Trump going into the election. All it accomplished was to remind voters why we voted for Trump in the first place. TDS is an insidious disease.

He had multiple opportunities to run for president and failed badly each time, he may be just like Biden, plenty of shared experiences in running and losing the race for president.

What does is say about their non-existent intelligence and absence of integrity, that they view Trump as allegedly constituting more of a threat to the U.S. than the gleeful totalitarianism, the destructive tribal Balkanization and the poisonous narratives of perpetual grievance proffered by the Dhimmi-crats? I mean, this is not complicated stuff; it’s not even a close question.

Remember that super-honest and conservative thing that John Kasich did to put the Medicaid expansion in place in OH? https://www.forbes.com/sites/realspin/2016/03/08/john-kasich-ohio-failed-obamacare-expansion/#7a3c7083409c The RINO punk put it in place by a back-room deal (with the aid of Larry Householder, the indicted crook). Since then, red ink without better health care has continued to flow. Thanks, John, for NOTHING.

Them using Kasich was utterly fantastic.

I’ve been telling people that this is a massive demonstration of how utterly panicked the Democrats are.

As I’ve said previously, all the people crowing about LUL BIDEN WINNING 9 POINTS IN POLLS.

Are Democrats ACTING like a party that thinks they’re winning this election?

ZERO actual conservatives are backing the Democrat insanity over Trump.

Yeah I not getting why Kasich was played up. He has been out of the national spotlight since Trump kicked his but in 2016. I see what’s in it for Kasich but what did the d get? A former governor who the r don’t want?

Is the d bench that thin that they put up some r past their sell by date instead of allowing more time for their more prominent members: AOC?

“There is no evidence that the Russians actually hacked this.”

In fact, there is testimony released by the HSCI, from the guy in charge of Crowdstrike, to the effect that they could find no evidence of Russian involvement in the hacking.

All the praise for Christie, okay. I understand people in that biz have to “work together,” or whatever.

But it sure would be helpful if all these people who actually know the candidates first hand would spill the beans before and during races rather than let the PR department give voters nice window dresssing.

Fortunately, Kasich wasn’t elected, but what about all the other useless dimwits that are, and elected officials know them well enough to know they’re dimwits, but don’t tell we voters?

Not right. Not right. Sometimes you have to burn a bridge to save a country. Some guts by some of them would be helpful. I’m not asking them to literally fall on a sword, but some providing truths about these people wouldn’t be suicide, just an inconvenience.

Kasich has always been a POS. Nothing new here except that he is coming further out of the closet.

He had my attention until he started in on that nonsense of Michelle Obama’s speech being effective. Then, I stopped listening.