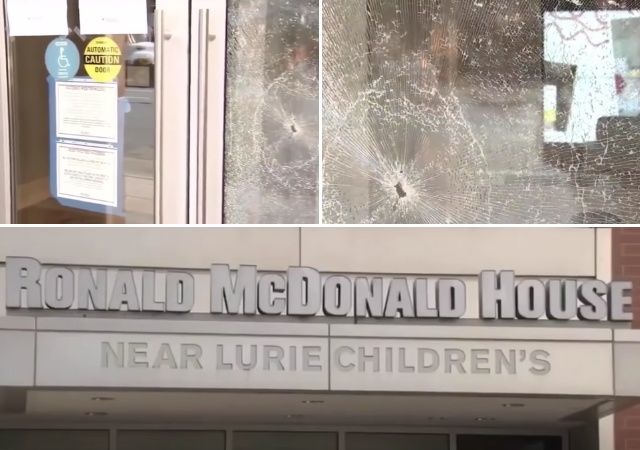 My heart breaks for the families who were under lockdown as rioters broke windows and doors of the Chicago Ronald McDonald House. They are only there because they have a child in intensive care. To deal with that on top of it all? Unimaginable.

The Ronald McDonald House in Chicago was vandalized during looting early Monday morning while families and their sick children huddled inside, the charity said Tuesday.

The Ronald McDonald House in the Streeterville neighborhood of the city’s Near North Side provides support for sick children and their families while the child receives medical treatment at nearby Lurie Children’s Hospital.

The charity said more than 30 families and their sick children were sleeping inside when the looters, who had taken over downtown, ransacking stores and vandalizing properties, started attacking the building.

“[We were] very concerned there was a lot of activity right in front of the house, people making choices that could put them at risk and put our families at risk, so the staff was frightened,” Lisa Mitchell, of Ronald McDonald House Charities, told ABC 7 Chicago.

“They are already in a really, really difficult spot,” she said of the families. “Having this kind of additional stress and worry about getting to and from the hospital even though we are five blocks away because of safety concerns is just doubling the strain.”

The building was placed on lockdown during the commotion, CBS Chicago reported. Several windows on the front of the building were smashed, and the front door had to be boarded up. No damage was caused to the inside of the house and no one was injured.

We have such big love for the Ronald McDonald House. When Baby Walt was hospitalized, the Ronald McDonald house was there for us. They provided encouragement, kindness, and accommodations, allowing us to spend the night on the same floor as our baby. We often opted to head home as we lived close and their rooms were almost always full (we thought it better to leave rooms for out of town parents), but on nights there was availability, we stayed. It was a tremendous comfort to be able to walk down the hall and see our baby at any point in the night instead of being at home with his empty bed.

Just when you thought they couldn’t go any lower………well, they did.

There is no such thing as Peak Evil.

They will continue to go as low as the local officials let them.

If obongo had sons……

Obama wannabes demonstrating their knowledge of justice and social conscience.

What? Are the Looters playing Limbo?
How Low can you Go?

This won’t stop until the looters take casualties. Many of them.

So why haven’t they?

Fair question. Local and state Dem leadership are in sympathy if not in league with the BLMers. Plus I believe some in authority are literally afraid of them.

you have to change the rules of engagement !

Case in point: the McCloskeys. Pilloried for self defense. Meanwhile, George Floyd gets angel wings, a halo, and three funerals.

When TSHTF, I’m afraid the po-po is going to find itself in both sets of crosshairs.

I’d settle for arrested and prosecuted to the fullest extent of the law, but I doubt that’s going to happen either.

Not in Chicago it won’t.

I say, all of them. I firmly believe that taking them out would greatly improve our gene pool.

We stayed at the Ronald McDonald House in KC when our son was a patient at KU Medical Center, literally just across the street. Great folks and a fantastic service funded by the McDonald’s corporation. If a group of thugs such as this had attacked that House when we were there I can guarantee there would have been bodies on the lawn.

I am habitually armed (legally) and do not suffer fools such as this lightly … or at all!

McDonald Houses exist not due to the 5% of corporate McDonalds owned stores but as the result of the 95% owner/operator owners who in 1974 came together to meet the need of a hospital in Philly, Pa. and has been consistent and continuous since. The Houses have grown to be in every market location in the US and internationally. You can find a personal donation box at the cashier who checks you out and in certain locations at the Drive-Thru. I had the job of collecting the donations of these boxes, wrapping the coin and crediting the donations in the account the owner/operator used to support the owners contribution which was a fraction of the check the owner/operator was writing to cover the expenses of operation of a McDonald House.

If the Joseph Goebbels media mentions the attacks, they will be blamed on (pick one or more of the following): outside agitators, white supremacists, right wing militia, the NRA, global warming.

You left out ‘Reaction to Donald Trump doing ….”

It part of the “reparations” the 99% of white living Americans who had no slave-owning ancestors owe to the 100% of the living blacks who were never slaves nor children of slaves. That makes it right. /snark

It’s that kind of intellectual absurdity that makes people wonder whether black people are suited for living in a free society.

Black people are, it is their marxist leadership that is pushing the envelop as far as it will stretch and their white enablers who give them cover.

It’s all about getting free sh*t.

It now transcends all races.

Regardless of race, looters should be terminated on the spot.

Yeah, keep in mind it was African American primary voters who gave the Dem nom to Biden instead of Bernie. I mean if you had to see a Democrat in the White House wouldn’t you rather have Sleepy Joe than a guy who thought Fidel Castro was awesome?

….and your point is? Bernie proxy with Bernie stooge is better than Bernie because….?

Scenario 1: Radical socialist President orders the military to stand down as mobs of ANTIFA thugs engage in direct action to redistribute wealth held by business owners, landlords, and other enemies of the people.

Obviously, neither is a desirable state of affairs, but don’t you think one is a little worse than the other?

They preferred Joe, the guy who wrote that law that put all the young black yutes in prison?
Maybe it’s just an attention span problem.

I wonder what percentage of white Americans today are descended from slave-owning white Americans of past generations. I know my relatives came to the US long after slavery was abolished.

His name was Cannon Hinnant

I was with you until you made that last stupid comment.

Meanwhile, the mayor is… probably holding another rooftop party.

Things are apparently so chaotic that Second City Cop hasn’t updates comments or articles for quite a while.

They went to twelves, no time. He said it would be sparse.

That, and the riots and lootin are now worse.

I assume it’s because if she doesn’t commandeer the highest rooftop in town herself, she risks somebody else commandeering a higher one.

In the “demonstrators” defense, they thought they could get a Big Mac there.

That is the kindest thing which can be said of their action. Most anything else is NSFW or public view.

sort of related.
right now antifa.com redirects you to joebiden.com

That was gone within hours. I did a whois and nothing was mentioned about “Democrats”, but, Citizen Free Press is milking it for all it is worth. CFP is becoming another Gateway Pundit.

We all know the GOP is as corrupt and treasonous as the DNC. The only difference is the DNC doesn’t hide it.

Obama blew it by failing to continue to hide who he was. Don’t forget: America’s disgust with obama gave us PDJT!

Don’t give a DIME to the GOP. Give it instead to PDJT’s campaign: let PDJT be the kingmaker, and stave the GOP into submission.

A long series of things Dems supported alienated me a bit at a time. Obama’s treachery, along with interacting with the Clinton administration made Hillary in my mind, totally unacceptable. I like Trump’s positions on many issues, but very much doubted that he was what he claimed to be. That was based on a few decades of close interaction with people in the Beltway. It turned out that Trump was actually genuine. And that, rough edges or not, is something I respect.

None of the Democrats are capable of dealing with virtually any of the pressing issues of our times in a competent manner.

His name was Cannon Hinnant
https://www.blabber.buzz/conservative-news/978603-national-media-silent-after-black-man-executes-5-year-old-white-boy-in-front-of-his-house

Evil cannot discern. I hope this bacfires on those abominations and only serves to raise support McDonald’s House.

Terrorists do these kinds of things!

Where the hell is the Cavalry?

Where are the indictments of the organizers and funders??

I am seeing reports on the net that communities are forming armed militia to deal with riff raff.

And THOSE are the ones who will feel the presence of the police. Not those causing the formation of the milita groups in the first place.

TWANLOC [Those Who Are No Longer Our Countrymen], Hostes [plural form] Humani Generis, no quarter to be given.

The same type of people who torn down statues of abolitionists

I hope there is a special place in Hell for them

Portland would be close second.

I am hoping to see lots of them send to hell.

““[We were] very concerned there was a lot of activity right in front of the house, people making choices that could put them at risk and put our families at risk,”
*****
Typical Snowflake “speak”….”people making choices”….not criminal behavior…ie. killing someone during a robbery is making a “bad choice.”

Hold steady and squeeze off the shot. Game over.

Those are aren’t people, they’re violent hate filled maniacs.
They forfeited their humanity long ago.

PS His name was Cannon Hinnant

Did they steal, assault, and neutralize the cancer? Didn’t think so.

Corrupt as he was, up with this Schitt, he did not put

Shoot to kill, shoot to maim

Is that their way of getting reparations? Attacking kids..or fried food?

“Why did they attack the Ronald McDonald House?” Hello, IT’S A MOB! Mob’s do things like that.

The idiots were probably dying of hunger…

Saw the sign, and thought they would get Big Macs and fries…

PS His name was Cannon Hinnant