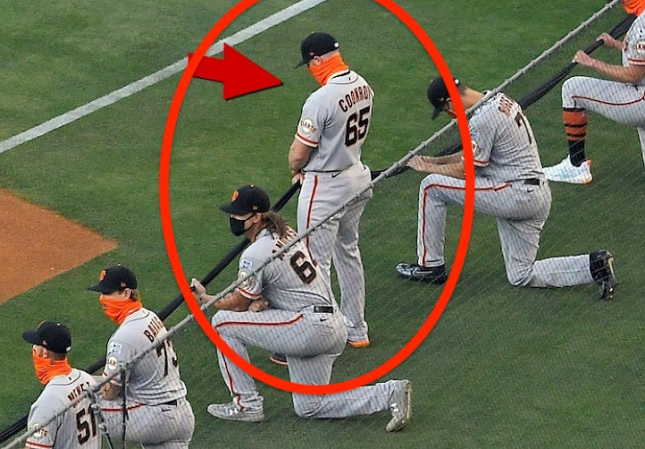 Apparently, most major sports leagues and teams have jumped on the anti-American “kneel for the National Anthem” / #TakeAKnee bandwagon that was rejected a mere two years ago.

Times have changed, though, in the wake of the “George Floyd” riots, which weren’t really about Floyd at all (who even mentions him now?).

The kneeling nonsense was originally intended to protest America as a racist nation with racist systems and blah blah blah.  Once the Marxist BLM cult got involved, it turned into white people, police, public officials kneeling to (even washing the feet) of black people.

This was a bridge too far for some who insisted they kneel to no one but God.

It takes a great deal of courage to stand, alone, when your peers are kneeling like mindless, groveling sycophants, so it’s important to recognize them for their bravery.

"I’m a Christian. I believe that I can’t kneel before anything besides God. I just can’t get on board with a couple things I’ve read about BLM, how they lean towards Marxism. They said some negative things about the nuclear family."

notamemberofanyorganizedpolicital in reply to rabid wombat. | July 25, 2020 at 2:00 pm

Stand up against BLM

DEFUND ALL PROFESSIONAL SPORTS. They get taxpayer to pay for the collusion they play in don’t they. That means you have leverage.

May not be like Rome now, but sooner or later we will be in the arena. Choose this day whom you will serve.

Displaying and demonstrating moral courage by refusing to compromise ones principal beliefs in the face of criticism and nearly irresistible pressure is often lonely.

The way to stop it is to 1. Complain to the owners, 2. refuse to watch the sport at all unless they change. When the owners see revenue dropping and ratings for the viewership of games drop, they will either tell their players to stop it, or they will go out of business.

They aren’t in this to simply play a game. This is business, big money passes through their hands.

Defund them by your actions.

The last lines of the pledge of allegiance are “with liberty and justice for all” – that’s worth standing for. Likewise for the United states, the republic, one nation under God, indivisible (we are committed to unity).

To kneel is to be against these things. To kneel is to submit to a lesser standard, to worship an idol. All who kneel are spineless cowards.

I’m frankly shocked that he has not been released from the team…How dare he think for himself!

Wait for it. He will be released, or some “accident” will happen to him for opposing the Material Dialectic.

Minor point: This incident occurred prior to the National Anthem, not during, although quite a few of the Giants took a knee during the anthem also (as did Mookie Betts and apparently some other members of the Dodgers bench who were out of the camera shot).

It really doesn’t matter when they kneel. THe kneeling is now recognized as the act of submission to the AMerica-hate crowd, as all the fools were doing with the rioters (like that idiot Police Chief Monahan in New York, who knelt in fealty to the mobs and is now whining about all sorts of stupid stuff that he endorsed with that).

Kneeling, of course, has traditionally been a sign of respect of no little measure, but, as with everything they touch, the America-hating left has managed to turn it into a sign of anti-civilizational idiocy. The left gets an extra kick out of perverting good things for their twisted purposes.

I wonder how long before kneeling is insufficient, and we will be required to bow down.

notamemberofanyorganizedpolicital in reply to georgfelis. | July 25, 2020 at 2:26 pm

Isn’t the purpose of kneeling so they can get their heads chopped off?

notamemberofanyorganizedpolicital in reply to ThePrimordialOrderedPair. | July 25, 2020 at 2:25 pm

…… and like the Congressional Democrats who kneeled wearing the emblems of a slave-trading African tribe.

The article implied that they knelt during the N.A. Many of them didn’t, and neither did the Dodgers starters with the exception of the execrable Betts. There is a difference, whether your recognize it or not.

Courage is the rarest human trait

1) Children do better in a nuclear family.

2) Children with smarter parents do better.

3) Being left behind by evolution, race and culture matter.

4) I do not watch any broadcast TV, I do fine without it.

5) The same is true of sports, they have cut their own throat.

6) Most print media is garbage,

I hope very sincerely that America has tuned out MLB

the anti-American “kneel for the National Anthem”

Yep, that’s it, exactly. The kneeling is nothing but America-hate. These idiots might as well skip the pathetic attempt to hide this fact and go right for the “Death To America” chants. That is exactly what they are advocating and, so far as I’m s=concerned, they are the lowlifes of the worst sort. I wish I were an avid fan of baseball so I could boycott it …

These America-haters make me sick. If America is so bad they can take their millions and go move to some socialist country or insane tyranny that suits their tastes much better. They’ve got pretty much the entire rest of the world to choose from. They’ve got money so they could live like kings pretty much anywhere they went. Bon voyage. I’ll pack them sandwiches.

Sick, despicable, lowlifes. That’s what and and every one of these kneelers are.

Why are these fools wearing masks on the field? Open-air transmission of covid-19 is nonexistent, and even if it wasn’t, age and physical conditioning means pro athletes are just about the lowest risk group imaginable.

notamemberofanyorganizedpolicital in reply to randian. | July 25, 2020 at 2:31 pm

Fauci stripped his mask off for his limp ball throw….

Answered your own question when you tagged them “Fools”, no?

Well, with members like this, they’ll have to change the name of the National League.

I will never again say “throws like a girl” as the ridiculously low standard for throwing ineptness. It will now be “throws like a Fauci”. Was that his splitter? It looked like he was throwing a scoop of ice cream from a cone. Worst EVAH!!!

In this age of gender fluidity, it is impossible to assign this pitiful level of incompetency to any specific gender. But it sure isn’t male or female. I’m guessing asexual reptilian from another planet.

MLB will be first in line to claim a COVID-19 taxpayer funded bailout for their losses this year.

I coyld never be POTUS. I never learned how to throw a ball.

W threw one right down the middle.

Obama was a limp-wristed fool.

The other cowards and/or America haters can all go to hell.

Every other Giants player? Disgusting.