Harlem Black Residents Push Back Against Abolishing the Police

Harlem Black Residents Push Back Against Abolishing the Police

“I would say it’s pretty good [the relationship between the community and the NYPD]. You know, all police officers are not bad. You know, you got some of them that really care about the people and really want to help the people.” 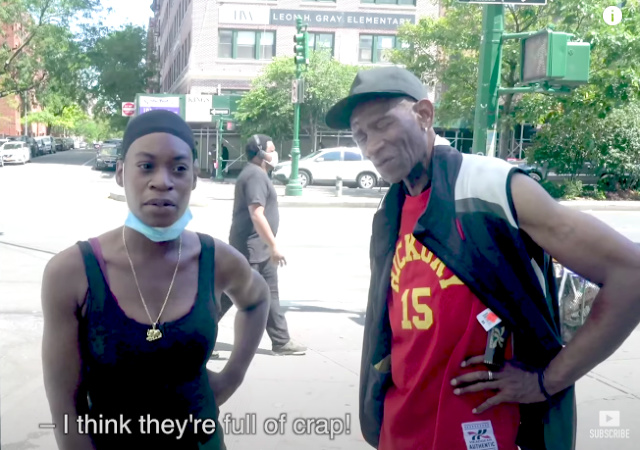 The #DefundThePolice movement began after the death of George Floyd in Minneapolis. Fuzzy noted on June 14 that mostly privileged leftists supported it, not blacks.

Floyd’s brother and family even rejected the idea.

Ami Horowitz provided more evidence that black people do not want to abolish the police. They want more accountability and reforms.

Horowitz spoke to white liberals, who think the black community would flourish without the police.

One man told Horowitz that no police would “infinitely” help black people.

Others called officers “disgusting” and “monsters.” Another said the police are around just to keep the blacks down and they “arose out of slave catching patrols.”

Horowitz then asked how they think black people in East Harlem feel about the police.

“Probably the same way I feel about them,” said the man who called officers “monsters.”

You white liberals are in for a rude awakening.

Then Horowitz went to East Harlem on Malcolm X Boulevard. He asked two people how they feel about the white people saying the black community would be better without police.

How would the neighborhood be without police? Others responded:

“Very dangerous, because it would be crazy! People would be just going crazy! You know what I mean? It would be worse than what it is. Robberies, looting, raping, murder.”

“It would be havoc.”

“Abolishing the NYPD? That would be suicide!”

“But yes, they are needed. I approve for them to be here.”

“There’s too many criminals out here, man! Are you kidding me? I wouldn’t feel safe! But you need the police to police the land, man, and the people, you know?

“We need control over this city. So I think that the police, the police are necessary.”

“I have family members that are police. I respect the police. I would not want to see a lawless society.”

“I would say it’s pretty good [the relationship between the community and the NYPD]. You know, all police officers are not bad. You know, you got some of them that really care about the people and really want to help the people.”

“I think they’re invested in the community. I support the police. I don’t support police brutality.”

I blogged BET founder Robert Johnson’s comments on people tearing down statues, even the Confederate ones, along with brands changing their marketing, canceling shows and movies, and firing professors.

Johnson said “black people don’t give a damn” that these people toppled statues. They laugh at the celebrities who apologize for their white skin.

He pointed out that none of this does anything for the actual worries of the black community: jobs, equality, opportunities to get off welfare and food stamps.

But Johnson ended the interview with a dose of truth: “White Americans need to ask black Americans what they really want.”

Communication. These white liberals assume what the black community want or need. Talk about being oppressive and racist. They decide what is offensive and what would be better for the community.

I wish them luck and Godspeed, but first they’re going to have to take care of all the Democrats that are blocking there goals.

Remind them of this.

Even though the DEM RIOTS have gone on 2 months now.

They better guard their box also.

1 in 5 Ballots Rejected as Fraud Is Charged in N.J. Mail-In Election

These followers and kneelers believe they are enlightened, but they are the dumbest and most retrograde around. Most are too stupid or ignorant to see the danger they pose.

So these white people actually live in New York City want to get rid of the NYPD? I mean that anyone who grew up or lives in NYC knows exactly what would happen without the cops. It is unreal

Yes, they live right here. It’s a case of mass hysteria, just like those documented by Charles MacKay back in 1841, in Extraordinary Popular Delusions and the Madness of Crowds. There’s no other explanation.

Is it fair to say ‘the Harlem of 2020 is nothing like the Harlem of 1960 or 1970?’ That today’s Harlem is a Harlem gentrified? And having said that – that black residents still consider it a fairly dangerous place to live? Is it more dangerous to live there than East Oakland?

I’m excluding ESL, Detroit and Chicago because those places are off the chart dangerous.

I read somewhere that being able to call a cop is a “white privilege.” If so, I prefer to see that privilege extended to all people in all parts of the city.

The comment about white privilege was a ridiculous statement made by a shady local politician trying to abolish the police department. It was ignorant and not based on anything close to reality. The majority of an officers time is spent responding to calls in the black community. Police are many times the ONLY ones who do anything to try to better the black community. Sadly the black community for a large part does nothing to help itself. They have glamorized the thug life and demonized people who try to better themselves through education and hard work.

Calling Police for help in an emergency or when a crime is committed is not a privilege to be held nor extended. What it should be is a civic duty.

And the moral of the story: diversity breeds adversity. Don’t indulge color judgments (i.e. low information attributes). This is not a black vs brown vs white vs orange etc. issue. Most people are not diversitists, let alone rabid.

The reform should start with legislation, regulation (e.g. AG, DA, experts), then follow through with enforcement. Should suspect have been stopped? Was the restrain suitable in all cases? Did the officer know that the suspect had consumed fentanyl, and was further infected with the virus formerly from Wuhan, which left him vulnerable to multiple stressors including regulatory restraint?

He pointed out that none of this does anything for the actual worries of the black community: jobs, equality, opportunities to get off welfare and food stamps.

But Johnson ended the interview with a dose of truth: “White Americans need to ask black Americans what they really want.”

White, brown, yellow, albino, even orange. Where is the solidarity? But, yeah, most people would rather stand than kneel. Men, in particular, need to be productive (e.g. earn externally negotiable capital for taxes, commerce, and other purposes), providers, in their own eyes, in the eyes of their girlfriends and wives, and children, too.

excellent vid–except for the ignorant libs in the first part of the vid am grateful to our countrymen in harlem for shining a little light on the rest of us–liked the body language of the harlem citizens as well–relaxed, sincere, thoughtful and earnest–literally night and day between them and all the hating/shouting/threatening of blm and antifa fools–real people, americans like us

Leftist white people thinking they are doing right by the black community are operating exactly opposite poor blacks.

He should have asked the guy in the pink shirt if he would ever call the police for anything. When he answered no, just start pummeling him. I bet he changes his mind.

Everything the Democrats do is red pilling all their Democrat Plantation Slaves.

Replying to
@
Follow me. I’ve been a Democrat for 10 years but the Left has fallen so far into anarchy, communism, and hate that I cannot stomach them anymore. I need some common-sense American loving Patriots to follow me because Democrats aren’t going to like me Tweets.

The path of freedom is always high, but Americans have always paid it. One path we shall never choose, and that is the path of surrender or submission.” -JFK

In November 2016, Ami Horowitz did a similar interview, this one covering “How white liberals really view black voter.”

The issue was voter ID’s

The second half of the video takes place in Harlem — where the African Americans interviewed thought the Berkeley students to be wildly uninformed, if not racist themselves.

Here is the link: https://youtu.be/rrBxZGWCdgs